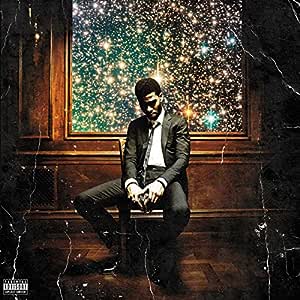 Man On The Moon II: The Legend Of Mr. Rager

Kid Cudi Format: Audio CD
4.7 out of 5 stars 470 ratings
Amazon's Choice recommends highly rated and well-priced products.
Amazon's Choice for "man on the moon cd"
See all 11 formats and editions Hide other formats and editions
Includes FREE MP3 version of this album.&nbspProvided by Amazon Digital Services LLC. Terms and Conditions. Does not apply to gift orders.&nbspComplete your purchase to save the MP3 version to your music library.
Available at a lower price from other sellers that may not offer free Prime shipping.

2010 sophomore release from the Cleveland-born, Grammy-nominated Hip Hop sensation, the follow-up to his debut album Man On The Moon. Features guest appearances from Cee-Lo, Mary J. Blige and Kanye West, who appears on the album's single 'Erase Me'.

Cleveland's own KID CUDI released his first mixtape, A Kid Named Cudi, in July 2008 as a free download, leading to an introduction and signing to Kanye West's G.O.O.D. Music imprint, and in turn, to Cudi's co-writing of four tracks on the platinum Kanye West album 808s & Heartbreak, including the Top 5 RIAA double-platinum single, "Heartless." He signed to Universal Motown in April, 2009 during the launch of his own label, Dream On, in a joint venture with G.O.O.D. Music. During this time he co-wrote two tracks on Jay-Z's No. 1 album The Blueprint 3, performing a featured vocal on the track "Already Home."

His Grammy nominated first debut single "Day 'N' Nite" topped both full-song download and ringtone sales charts. Digital single sales have passed the 2.2 million. In addition to its U.S. No. 3 Billboard Hot 100 and No. 5 Hot R&B/Hip-Hop Songs chartings, "Day 'N' Nite" was a Top 20 national hit in 11 international territories -- Top 10 in six of these -- and in the U.K., the club mix of the song entered the national singles chart at No. 2.

Kid Cudi's debut album "MAN ON THE MOON: THE END OF DAY" was released on 9/14/09, landing at #4 on the Billboard Top 200 chart with over 103,000 units sold. Since then he has is approaching 500,000 albums sold, 4.5 million digital singles and 1.3 milllion mobiletones Sold. Cudi's featured guests on the album included Kanye West, album narrator Common, Ratatat, and MGMT. Kid Cudi's devoted fanbase continues to grow on and offline as he has played over 100 live Shows in the last year and a half, including festivals such as Bonnorroo and Bamboozled. His online presence cannot be challenged as he gained over 2 million fans on facebook In the last year alone.

Kid Cudi starred in the first season of HBO's "HOW TO MAKE IT IN AMERICA" and plans To return for the next season.

Cudi's new album "MAN ON THE MOON 2: THE LEGEND OF MR. RAGER" is in stores This November. The debut single "Erase Me" features Kanye West. He will continue to play live as he is currently on a College Tour.