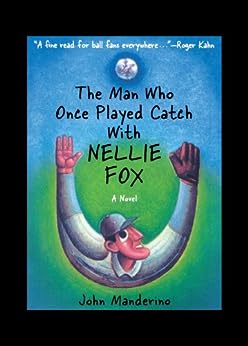 The Man Who Once Played Catch With Nellie Fox: A Novel Kindle Edition

After chasing his dreams around the minor leagues for years, Hank Lingerman, the aptly named, 40-year-old Chicagoan hero of this winsome, workaday novel, has wound up working in the Sunoco Station his father once owned and living on canned soup and tuna. He also plays for a grocery store-sponsored adult league team. Baseball, for Hank, is the only thing that defines him, but not in the philosophical or mystical sense. Rather, it is playing the game that he loves, actually being part of something that he always aspired to master. When a pop-up comes down and bops him on the head, Hank admits that his life has gone into a slump from which he may never recover. Taking up with Mary, a nose-ringed, teenage disco pick-up, Hank dumps his goodhearted, longtime girlfriend, gets into a fight at his favorite saloon, blows a big game and comes home to discover that Mary has stolen his TV and his Nellie Fox autograph. Things go downhill from there. This rambling account of the middle-aged crazies rarely rises above the mundane. Hank's menopausal angst?which centers on his recollection of one moment of greatness, the day he met and had a brief catch with Fox?hangs over the entire novel like a low-pressure system. Yet even these faults and a predictable ending can't detract from what, like the hapless Chicago Cubs, Manderino's (Sam and His Brother Len) characters possess: miles and miles of heart.
Copyright 1998 Reed Business Information, Inc. --This text refers to the hardcover edition.

Loopy, bittersweet send-up of a boozing, over-the-hill suburban Chicago baseball team whose members can't get used to growing old. After he's beaned on the brain by a pop fly that he ought to have caught, Hank Lingerman, the 40-year-old second baseman of the Shopalot Sharks (their team logo is a speeding supermarket shopping cart), walks off the playing field in dark disgust. A gas station mechanic by day, Lingerman clings to a childhood memory of playing a game of catch with Chicago White Sox second basemen Nellie Fox, during which Fox had assured him that he had talent. Since then, Lingermans played in a series of hapless minor-league farm teams, hoping for a shot in the majors that has never come. Now a divorc (his baseball-fan ex-wife said she left him because she was bored), even abandoned by his pet dog, and despised by his girlfriend Karen's ten-year-old brat Brian, Lingerman falls for a young barfly, who steals his TV set and autographed Nellie Fox picture, thus hurling him into a drunken despair. Lingerman's teammates, all of whom are also experiencing some variety of menopausal meltdown, comically fail to bring him out of his stupor. He proposes marriage to Karen and resolves to read an encyclopedia from beginning to end, though continued failures on the playing field, and difficulties with Brian, plague himuntil he forces the boy to play catch with him. While his friends either ignore or succumb to their own frustrations, Lingerman eventually accepts that baseball isn't life and life isn't fair, but that by lightening up one can get by anyhow. Slight, meandering, and beer-soaked, Manderino's sunny second novel (Sam and His Brother Len, 1994) will have aging baseball fans believing that sandlot fellowship and a woman's tender love really can save men from cynicism, bad marriages, and dead-end dreams. -- Copyright ©1998, Kirkus Associates, LP. All rights reserved. --This text refers to the hardcover edition.

"...will have aging baseball fans believing that sandlot fellowship and a woman's tender love really can save men from cynicism, bad marriages, and dead-end dreams." --Kirkus Reviews
--This text refers to the paperback edition.

Manderino's second novel is a comic gem. At forty, Hank has decided he's through with baseball--a routine pop-up fell on his head and he got the message. Trouble is, baseball is the one thing that's given any meaning to his life. This is the painfully funny story of a man who decides to get a life, but isn't sure how. It's about fathers and sons, heroes and whiners, the Wheel of Fortune (and Vanna White), baseball and the decline of Western civilization--and why Hall of Famer Nellie Fox always spat in his glove.

John Manderino was born in Illinois and teaches in Madison, WI.
--This text refers to the paperback edition.
Read more

Irish
4.0 out of 5 stars Good subject,written by hometown guy.
Reviewed in the United States on March 13, 2014
Verified Purchase
I am from Riverdale, Illinois also and my dad was a friend of Nellie Fox...I bought this because my father would have loved the title alone...the story is imaginative and very well written...the subject of baseball in our home was like "apple pie" in a way. I think
Mr Manderino did a good job and I enjoyed this book, an easy read on a snowy afternoon. I will be looking at some of his other books since I enjoyed this one very much.

Ken Channer
4.0 out of 5 stars Great story for both baseball and Nellie Fox fans
Reviewed in the United States on January 1, 1999
Even if you are not a Baseball fan, this is a great human intrest story, of a real sounding person and his troubles growing up. If you are a baseball fan or a fan of the late great Nellie Fox it is an absolute most
Read more
3 people found this helpful
Helpful
Report abuse
See all reviews
Back to top
Get to Know Us
Make Money with Us
Amazon Payment Products
Let Us Help You
EnglishChoose a language for shopping. United StatesChoose a country/region for shopping.
© 1996-2021, Amazon.com, Inc. or its affiliates