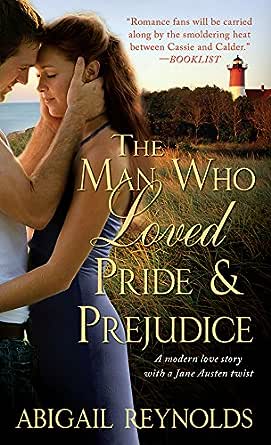 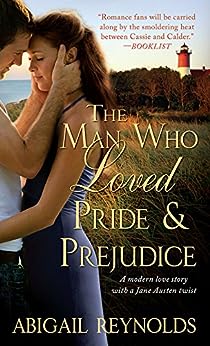 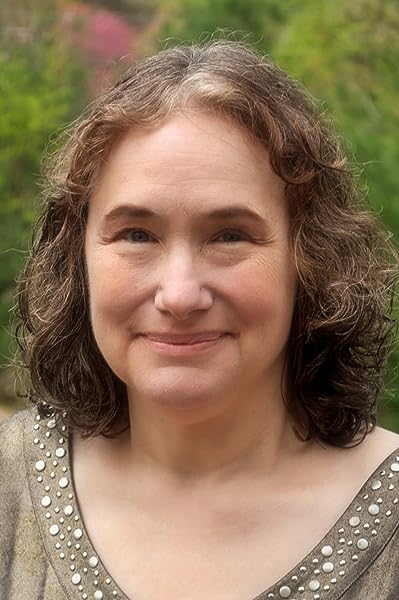 The Man Who Loved Pride and Prejudice: A modern love story with a Jane Austen twist Kindle Edition

Abigail Reynolds is a physician and a lifelong Jane Austen enthusiast. She began writing the Pride and Prejudice Variations series in 2001, and encouragement from fellow Austen fans convinced her to continue asking "What if…?" She lives with her husband and two teenage children in Madison, Wisconsin. --This text refers to the mass_market edition.

"Reynolds has a great writing style... steamy and surprising." - The Bibliophilic Book Blog

"An excellent modern adaptation of a Jane Austen novel and remains one of my favorites! " - Austenesque Reviews

"A great read with wonderful, complex characters. " - Once Upon a Romance

"This is the liveliest romp through an established tale you'll find on the romance shelves!" - Best Romance Stories

"Reynolds will take the reader through numerous plot twists and turns, leading to a wonderful conclusion." - Rundpinne

"As a huge Austen fan, I enjoyed this book and thinks it gives proper homage to a classic." - Palmer's Picks for Reading

"An amazing writer and storyteller that any book by her is hard to resist." - Books Like Breathing --This text refers to the mass_market edition.

The sea wall marked the beginning. Cassie had first glimpsed the ocean there while her jaded college friends told stories about their past vacations on Cape Cod. They didn't know she came from a place with asphalt seas, so she pretended the ocean was just as familiar to her. But she was captivated that very first day, tasting the briny sea air blowing in off the Sound. It cleansed her of the grime of the past.

Now, ten years later, the ocean was her life's work. She'd earned the right to watch the waves lap against the pitted stones of the sea wall. Place names like Sippewisset and Chapoquoit, which once sounded so exotic, were commonplace and comfortable now. The sea still held power, though it couldn't wash away guilt as easily as the pangs of adolescent shame. Today the ocean was only itself, changeable and rich with unseen life. She was on her own to do the work of forgetting. She felt a tug at her arm. "I'm coming," she said, her eyes straying back to the dark water. The cry of gulls echoed a horn blast as the ferry from Nantucket returned to the harbor.

Erin tapped her foot, her blonde hair streaming behind her in the salt breeze. "The music's started. You can come back here later." That was the best thing about the ocean. It was always there when Cassie wanted it. A long summer in Woods Hole stretched ahead of her, filled with time she could devote to the research she loved. She shrugged off her wistful mood and stepped carefully down to the sidewalk. "You're in a hurry to get there."

Erin didn't meet her eyes. "I promised Scott I'd be there early to help him learn the dances."

"Scott?" Trust Erin to have already found a man, even though she'd only been there a few days. "Another summer romance? You haven't mentioned him."

"I barely know him. And maybe you'll meet somebody."

Cassie laughed. "With you there? Not likely.

Besides, what would I do with a man? He'd just be inthe way of work." Men were usually too dazzled by Erin's lithe beauty to pay attention to Cassie, which suited her perfectly.

They followed the rhythmic lure of fiddle music down Water Street, past the library of the Marine Biological Laboratory. Inside the brightly lit Community Hall, the swirl of dancers chased away any serious thoughts. There were some familiar faces among the dancers-other researchers from the Marine Biological Laboratory and grad students returning for the summer. Cassie spotted one of her old lab partners across the hall and waved to her grant administrator as he danced past. Since the New England folk dances were taught on the spot, anyone could participate. The contra dances were asocial center of Woods Hole, one of the few places where scientists, townspeople, and tourists crossed paths.

Cassie danced first with a gangly young grad student from the neurophysiology lab, a newcomer to the MBL. The dance was a vigorous one, and she threw herself into it, enjoying the complex patterns and laughing at her partner's jokes about his inexperience. Erin, partnered with a good-looking man sporting a dazzled smile, moved past Cassie down the line of dancers. Despite the crowded room, Cassie chanced upon Erin again when the music ended. The windows of the historic clapboard hall were wide open, and Cassie welcomed the cool sea breeze on her arms after the energetic dance.

"Looks like you made a conquest already," Cassie teased.

"Scott? I met him at the biotech lecture yesterday." Erin's faint blush gave her away. "But he invited me to have lunch with him tomorrow. Will you come, too? I told him I was going to bring a friend along." Given some of Erin's bad experiences with men, Cassie could understand her caution. "I can come to make sure he meets my standards for your boyfriends, but I imagine I'll be a third wheel."

"Of course not. It'll be fine." Erin had a faraway look Cassie hadn't seen for some time. She hoped this time it was warranted. Erin deserved some good luck for once. Then Erin's eyes widened. "Oh, God. Is that who I think it is?" She didn't sound happy about the new development.

Cassie craned her neck to see the entranceway where a broad-shouldered man with wavy brown hair was paying the entrance fee. She didn't need to see his face to recognize him, even after three years. Her stomach tied in a knot. What was Rob doing in Woods Hole? Did he know she was there? She clenched her hand until her fingernails bit into her palm. If he knew, he wouldn't care. He hadn't even bothered to say good-bye to her when she left Chapel Hill. "Yes, that's him," she said grimly.

Erin's tentative voice provided the challenge Cassie needed. She wasn't going to let Rob Elliott's presence chase her away. "No. I'm going to find a partner for the next dance." Preferably one that would make Rob think she'd never given him a second thought in the last three years.

Cassie looked around quickly. Most of the dancers were already partnered for the next dance, but she spotted a tall man standing alone in the shadows by the front of the hall. She set out purposefully toward him. He didn't look like a scientist, given that his clothes matched and had the air of being recently purchased.

Even in chinos he gave off the air of being formally dressed. Not her type, but still, one dance with a tourist wouldn't kill her, and it was better than letting Rob see her being a wallflower.

As she came up to him, the man's classic good looks gave way to a certain ferocity of expression. Cassie hesitated for a moment, but Erin was watching, and she wasn't going to admit to losing her nerve. Although the man seemed oblivious to her presence, she asked, "Do you have a partner for the next dance?"

For a moment he said nothing, and had Cassie been more timid, she would have been cowed by the look he gave her. "I'm not planning to dance, thank you." His lips barely moved when he spoke.

I loved the adult love story between Cassie and Calder and the warm, satisfying comparisons between their tale and that of Elizabeth and Mr. Darcy. --This text refers to an alternate kindle_edition edition.

In this engaging love story, Austen enthusiast Reynolds (The Pemberley Variations) brings echoes of Elizabeth and Darcy to present-day New England. Marine biologist Cassie Boulton spends summers at an insular Cape Cod academic community, studying salt marshes. Sparks fly when Calder Westing, the heir of a famous political dynasty, enters her life, but Cassie knows better than to fall for a man who can have any woman he wants. Certain her low-profile career and inner-city Chicago background disqualify her from long-term consideration, she cuts ties with Calder after just one steamy night. Cassie doesn't know that Calder harbors genuine feelings for her. With some literary maneuvering, Calder finally wins Cassie's heart, but his powerful, ruthless father is determined to split them up. Beyond a surplus of cliché and throwaway characters, lush descriptions of Cape Cod are appropriately aphrodisiacal, the couple's wit and chemistry make them worth rooting for, and Cassie's well-rendered intellectual life not only gives her depth and independence, it gives readers a welcome break from that standard of modern heroine-ism, the plucky fashion and/or media lackey. (Oct.)
Copyright © Reed Business Information, a division of Reed Elsevier Inc. All rights reserved. --This text refers to an out of print or unavailable edition of this title.

Reynolds offers a modern variation on Jane Austen’s Pride and Prejudice, as she did in Impulse & Initiative, also reviewed in this issue, by focusing on Cassie Boulton, a successful marine biologist trying to outrun her past, and Calder Westing, the haughty, handsome son of a politician who wants nothing to do with the family profession. Cassie, who is in Cape Cod for a summer research project, finds Calder off-putting and entirely unappealing. Thrust together because of the romance between her friend Erin and his friend Scott, Cassie and Calder find themselves drawn to each other, resulting in a steamy encounter on the ocean. Certain Calder’s interest in her isn’t genuine, and haunted by her past, Cassie puts Calder off and flees back to the college where she teaches. Although some elements are a bit cheesy—Calder writes a modern Pride and Prejudice novel casting himself and Cassie as the star-crossed lovers—Reynolds convincingly updates Austen’s classic, and romance fans will be carried along by the smoldering heat between Cassie and Calder. --Kristine Huntley --This text refers to an out of print or unavailable edition of this title.
Read more