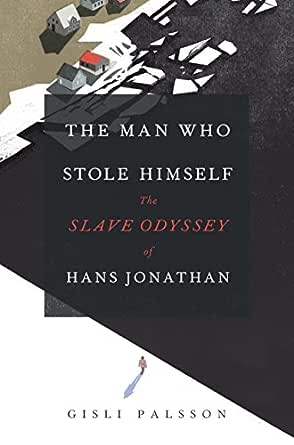 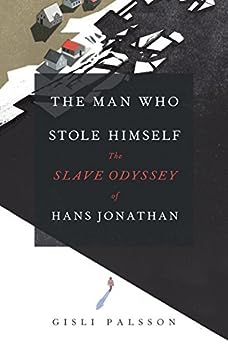 The Man Who Stole Himself: The Slave Odyssey of Hans Jonathan Kindle Edition

“An intriguing work of microhistory. . . . Through this engaging tale of one man’s attempts to find a home as a man of color in nineteenth-century Scandinavia, Palsson uses Jonathan’s previously obscure but picaresque life as a lens through which to examine questions of imperialism, slavery, race, and cultural identity.”
, Publishers Weekly

“With wondrous sleuthing, Palsson has recreated the life of a runaway slave, whose story lay hidden for centuries in the memories of an Icelandic family. Hans Jonathan, born to a slave mother in St. Croix and transported to Copenhagen as a boy, escaped in secrecy to Iceland. There he lived as tradesman, farmer, and married man. Palsson paints vividly the multiple worlds that Hans Jonathan saw—from vindictive slave-owners to folks willing to challenge the doctrines of race. A gripping read, The Man Who Stole Himself shows the powerful resonance that slavery and freedom have for our own time.”
, Natalie Zemon Davis, author of The Return of Martin Guerre

“Palsson has much to teach about eighteenth-century Dutch colonialism, the Dutch West Indies, and the trade in sugar and slaves, but this deeply-considered book is not the typical ‘epic history’ of world events. Rather, in its portrait of one man who became extraordinary by claiming his rights to an ordinary life, it puts the monstrous on a human scale.”
, Politics & Prose

“If you're a history buff, this incredible story of an escaped slave will enthrall you. . . . The Man Who Stole Himself is an amazing story about how one lucky man used his wit and education to escape slavery, but it’s also about how people in small Icelandic communities understood race at a time when none of them had met anyone of African ancestry before. It’s simply riveting.”
, Ars Technica

“A welcome addition to the use of biography in anthropology and for its contribution to our understanding of slavery.”
, Journal of the Royal Anthropological Institute

“There can be no doubt that Palsson has with this fine monograph rendered a great service.”
, American Ethnologist

“As befits an eminent anthropologist, Gísli Pálsson has done far more than write a biography of a unique individual. He sets Hans Jonathan’s exceptional life in context, examining the brutal history of the ‘triangular slave trade’, the development of ideas about fundamental human rights, and the history of European and North American racialist ideologies. . . .This meticulously researched and thoughtful biography will appeal to all those with an interest in the slave trade and its ramifications outside the Anglo-American sphere, or in how concepts of ‘race’ have evolved – and sometimes regressed – over the last two centuries. It is a timely reminder of an earlier migration crisis – the transportation of enslaved people from Africa to the Caribbean and beyond.”
, European Literature Network

“More than simply a captivating biography, Palsson’s book explores the many worlds that Jonathan navigated. . . . The Man Who Stole Himself is a welcome addition to the literature on race and slavery in the Atlantic World. Accessible and engaging, this book will appeal to historians, anthropologists, and graduate students working in the histories of race, slavery, colonialism, imperialism, and their legacies in the modern world.”
, The American Historical Review --This text refers to the hardcover edition.

Gisli Palsson is professor of anthropology at the University of Iceland. He is the author, editor, or coeditor of many books.
--This text refers to the hardcover edition.

Kristjan Ingvarsson
5.0 out of 5 stars Non-fiction but reads like fiction
Reviewed in the United States on October 10, 2016
Verified Purchase
The book reads like a novel but it is entirely based on facts. Hans Jonathan, a 7 year old son of a slave, and therefore a slave himself, moves from the Danish Virgin Island of St. Croix to Kopenhagen in Denmark, where he becomes a war hero. For that he gets his freedom from the Danish king but his "owner" wins the case against the King and Hans Jonathan - before getting sent back to St. Croix - flees to Iceland. This is an important book. Anyone concerned with human rights should read it.
Read more
10 people found this helpful
Helpful
Comment Report abuse

Randi Ottosen
5.0 out of 5 stars Fantastic, brilliant!
Reviewed in the United States on October 8, 2016
Verified Purchase
This book is a new " Roots" and it's so thrilling and brilliant. I really want to recommend this book. Gisli Palsson rolls out Hans Jonathan's story piece by piece. Fantastic that so much information can be found about a man, who lived from 1784-1824, from Sct. Croix to Copenhagen and from there to Iceland.
The author also takes up out the discsusion about racisme ,- also of today.
Read more
8 people found this helpful
Helpful
Comment Report abuse

Bob Richey
5.0 out of 5 stars I Thought The Slavery No Longer Existed in Modern Society
Reviewed in the United States on July 12, 2018
Verified Purchase
A Book the every American and anybody else who is appalled by slavery should have on their "must read" list.
Read more
One person found this helpful
Helpful
Comment Report abuse

Debanox
3.0 out of 5 stars Reads like a doctoral dissertation.
Reviewed in the United States on April 24, 2018
Verified Purchase
The author throws in much speculation into a work that is intended to be historically accurate. The life Hans Jonathan lived was unique and worthy of notice. The footnotes failed to elucidate the text which annoyed. There was also a fair amount of specious discussion unrelated to Hans’ life experiences. For history, I am glad I read it, but there were a lot of bothersome irrelevancies that made the reading less engaging than it might have been.
Read more
Helpful
Comment Report abuse
See all reviews from the United States

Maurice J Gleeson
5.0 out of 5 stars Reconstructing the experience of slavery
Reviewed in the United Kingdom on May 27, 2019
Verified Purchase
Fascinating account of the only (half-)African slave to escape to Iceland. He is the subject of a recently completed project to rebuild his genome from the DNA of several hundred of his descendants.
Read more
Helpful
Sending feedback...
Thank you for your feedback.
Sorry, we failed to record your vote. Please try again
Report abuse