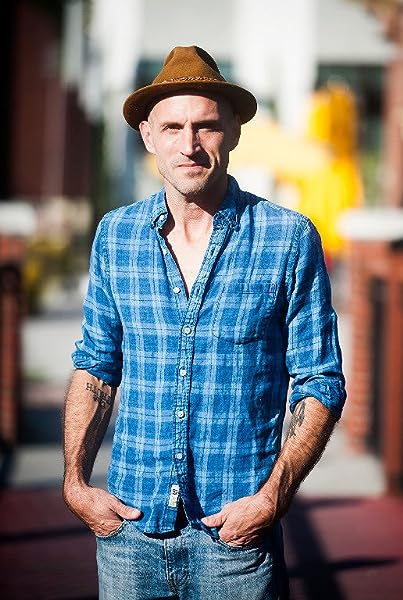 The Man Who Walked Backward: An American Dreamer's Search for Meaning in the Great Depression Hardcover – September 18, 2018

"Wielding both the big brush historical context and fine comb of biographical detail, Montgomery's text reads as good literature, taking a seemingly peculiar stunt and drawing out the humanity of the man and his era. All American history readers should wander and wonder with Wingo, whose tale is elegantly sketched out here."
―Jeffrey Meyer, Library Journal (Starred Review)

"Engaging...In clean, briskly paced prose, Montgomery follows Plennie's journey, and he walks the reader backward, too, into the history of America in the 1930s and before."
―Colette Bancroft, Tampa Bay Times

"Ben Montgomery is a joy and a wonder, a writer I would happily follow halfway around the world -- backward. In fact, I just did, in the compelling company of Plennie L. Wingo, the retrograde ambulator of Abilene, Texas. What a book!"
―David Von Drehl, author of Triangle: The Fire That Changed America and Rise to Greatness: Abraham Li

From Rip Van Winkle to Forrest Gump, Americans have fallen in love with quirky individualists who find their true worth by lighting out into the territory. They were fictional. Plennie Wingo, the man who decided to walk across the globe backward, was real. Wingo turned his back on the Great Depression, an adventure brought to life by the vivid narration of Ben Montgomery, a writer so talented I could read him walking backward."
―Roy Peter Clark, author of Writing Tools

"In The Man Who Walked Backward, Ben Montgomery lovingly assembles a mosaic of the United States and the world between the wars, told through the life of a small-town Texan who refused to accept his miserable lot during the Depression. Montgomery's vivid storytelling resurrects the strange and wonderful Plennie Wingo, a new American Everyman."
―Andrea Pitzer, author of One Long Night

Ben Montgomery is a former enterprise reporter for the Tampa Bay Times, founder of the narrative journalism website Gangrey.com, and author of Grandma Gatewood's Walk. In 2010, he was a finalist for the Pulitzer Prize in local reporting and won the Dart Award and Casey Medal for a series called "For Their Own Good," about abuse at Florida's oldest reform school. He lives in Tampa with his three children.
Start reading on your Kindle in under a minute.

3.9 out of 5 stars
3.9 out of 5
14 customer ratings
How does Amazon calculate star ratings?
Amazon calculates a product’s star ratings based on a machine learned model instead of a raw data average. The model takes into account factors including the age of a rating, whether the ratings are from verified purchasers, and factors that establish reviewer trustworthiness.

jgbeamish
5.0 out of 5 stars If you love history this is for you.
Reviewed in the United States on January 2, 2019
Verified Purchase
This book is fabulous, it walks you through what was happening in history as he goes on his journey. Couldn't put it down.
Read more
One person found this helpful
Helpful
Comment Report abuse

T. White
5.0 out of 5 stars Good read
Reviewed in the United States on May 11, 2019
Verified Purchase
I really enjoyed this modern Forrest Gump tale. Lots of good history about the places he went through and the times he lived in.
Read more
One person found this helpful
Helpful
Comment Report abuse

P. Lund
1.0 out of 5 stars Not for me
Reviewed in the United States on January 18, 2019
Verified Purchase
Had to read f or book club. Historical facts a tad entertaining, but that's about all I can say in a positive way.
Read more
One person found this helpful
Helpful
Comment Report abuse

A. S. Baesel
5.0 out of 5 stars A Tenacious Quirky Fellow Walks Backward During the Great Depression
Reviewed in the United States on October 24, 2018
I wasn't sure if I was going to like Plennie Wingo. On first glance, he seemed like he was going to be a self-absorbed fellow running away to find fame. And there is more than a bit of truth to that image. But, as revealed by author Ben Montgomery, Plennie turns out to be a very tenacious individual with, yes, an odd dream, but someone who is willing to put up with discomfort and uncertainity to say nothing about the feat of walking backwards over 8000 miles across the U.S. and Europe. The author intertwines Wingo's journey with what was happening on the ground around him during the early 30s in both the U.S. and Europe. He wasn't the only individual who set out on a long walk as hundreds of thousands of men and their families were wandering throughout the U.S. looking for work and a meal. The major difference was Wingo's journey was oddly by choice. It's a fascinating look into one man's crazy dream.
Read more
7 people found this helpful
Helpful
Comment Report abuse

NancyAdairB
VINE VOICE
4.0 out of 5 stars Fascinating history
Reviewed in the United States on September 26, 2018
Plennie Lawrence Wingo is not a household name, although he went to great lengths endeavoring to achieve fame.

A string of bad luck had hit Plennie, thanks to the Depression. Nearly penniless, he hit on an idea. People were doing all kinds of crazy things to break records in a quest for fame. With fame comes money. It seemed as if everything that could be done had been done. Except...no one had walked around the world backward.

Plennie became obsessed. Every day for six months he practiced walking backward. He bought a map and sunglasses with mirrors to see behind him. He was given a cane. He put on his steel heeled shoes and a suit and ticked a notebook in his pocket, and in 1931 he left Texas, walking backward down Main Street on his way toward Dallas. He had picture postcards of himself to sell for income and hoped to find a commercial sponsor.

The Man Who Walked Backward by Ben Montgomery is Plennie's story, which is entertaining and interesting. He meets with great generosity and falls victim to scammers. He is a dreamer and a go-getter, fated to hit brick walls. He is harassed by cops and jailed in a foreign land. An affable man, he made friends who offered him shelter and meals and sometimes cash.

As readers travel with Plennie, we experience the misery and poverty of the Depression. We learn the story of America's growth through the history of the places he passed through, and how we used up and destroyed our vast riches.

Famous events and people are mentioned: the destruction of the buffalo as part of Native American genocide; the destruction of the prairie; towns that boom and bust; lynching and the Klan; Bonnie and Clyde and Al Capone; the kidnapping of Charles Lindberg's baby; the rise of Hoovervilles and the Dust Bowl; the growth of the beer industry and Prohibition.

And we travel with Plennie to Germany to experience the rise of Hitler, and across Europe to Turkey. It is unsettling how 1931 America is so familiar: ecological disaster, the destruction of the working class, the rise of a man who knew how to work the crowd, "tailoring his speeches to his audiences" and promising to make Germany great again. "People loved him. those who didn't were scared of those who did."

I found the book fascinating.

I received a free ebook from the publisher in exchange for a fair and unbiased review.

J. K. Campbell
5.0 out of 5 stars A Look Backward
Reviewed in the United States on September 18, 2018
As a book reviewer I was privileged to receive an advance proof of this book which seems destined to make nonfiction best seller lists. Ben Montgomery is a narrative journalist with the ability to choose a fascinating array of seemingly random events to form a perfect mosaic of a bygone era-in this case, the Great Depression. Bill Bryson used a similar technique in his popular book, "One Summer: America 1927".
By following the exploits of Plennie Wingo, a West Texas character who combines the naivete of Forrest Gump with the hucksterism of P.T. Barnum, Montgomery transports us to a time when economic chaos begins to plunge the world into its most devastating war. Whether Wingo ultimately achieves his quixotic goal is not particularly relevant to the reader's enjoyment of this extended shaggy-dog story. What will remain is the basic decency and generosity of average people willing to help a total stranger complete an impossible task.
Read more
7 people found this helpful
Helpful
Comment Report abuse
See all reviews from the United States

Page 1 of 1 Start overPage 1 of 1
This shopping feature will continue to load items when the Enter key is pressed. In order to navigate out of this carousel please use your heading shortcut key to navigate to the next or previous heading.
Back
Next
Pages with related products. See and discover other items: Best man searches for meaning