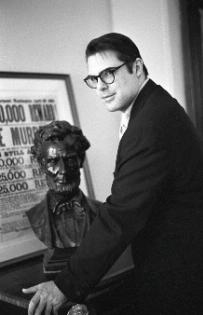 James Swanson is the Edgar Award-winning author of the New York Times bestsellers Manhunt and its sequel, Bloody Crimes.

Start reading Manhunt: The 12-Day Chase to Catch Lincoln's Killer (P.S.) on your Kindle in under a minute.

4.7 out of 5 stars
4.7 out of 5
956 global ratings
How are ratings calculated?
To calculate the overall star rating and percentage breakdown by star, we don’t use a simple average. Instead, our system considers things like how recent a review is and if the reviewer bought the item on Amazon. It also analyzes reviews to verify trustworthiness.

David J. Mulholland
5.0 out of 5 stars Things you may not have known about the assassination of Lincoln
Reviewed in the United States on November 20, 2016
Verified Purchase
Saw this book referenced on a TV show about hunting down John Wilkes Booth. Got the book and could not tear myself away from it. I am a big Civil War history buff. I've read a lot and I've watched a lot, including books and shows about Lincoln's death. But I found new information in this book. The book is well written and easy to read. The plotting, the assassination of Lincoln, and the subsequent manhunt are fascinating. The facts, as they happened, equal what the most creative television or movie writer could envision. Swanson does a great job of relating all the details in a way that reads like a murder mystery and not like reading a history textbook. It is evident that Swanson has engaged in extensive research over the years to author this book. For anyone who wants to learn more about this compelling time in our history or just wants to read a great book, then this is the book for you.
Read more
17 people found this helpful
Helpful
Report abuse

T. Graczewski
5.0 out of 5 stars Popular History at its Finest
Reviewed in the United States on March 12, 2018
Verified Purchase
"Manhunt: The 12-Day Chase for Lincoln's Killer" was a commercial and critical smash hit from the moment it was released in 2007, and rightfully so. Author James Swanson weaves a detailed and enthralling narrative from first-hand accounts and documentary evidence. It's trite to say that a popular work of historical non-fiction reads like a novel, but this one really does.

I loved the details -- some macabre, others humorous -- that Swanson uses to provide a complete and arresting picture of the events of late April 1865. Such as Laura Keene, leading-lady in the production of "Our American Cousin" at Ford's Theater on the night of the assassination, who gently craddled Lincoln's head in her lap in the moments before the stricken president was moved across the street the Petersen House. The narcissistic thespian and trigger-man, John Wilkes Booth, hungrily pouring over the news of the assassination in newspapers as though he were reading reviews of his latest stage performance. The pious, dim-witted, and self-castrated Union cavalry soldier, Boston Corbett, who shot the cornered Booth through the neck, rendering the assassin a quadriplegic for the final few hours of his life. Major Henry Rathbone and his fiance, Clara Harris, who accompanied the president and Mrs. Lincoln to the theater that night after General and Mrs. Ulysses S. Grant (and several others) had to turn down the request, only to provide minimal assistance during and after the attack (18-years later Rathbone would murder his wife in Germany). The authoritarian curmudgeon, Edwin Stanton, who created a virtual command center in the room next to Lincoln's deathbed at the Petersen House to track down and capture the assassins, which were, he was convinced, part of a wicked conspiracy orchestrated by the Confederate high command. The diminutive, but courageous Fanny Seward, who valiantly fought to save her father, secretary of state Willam Seward, from the vicious bowie knife blows of Lewis Powell.

It is important to note that Swanson's narrative never touches on the controversial questions of the military tribunal that sent four men and one woman to the gallows in July 1865. The sole focus is the day of the assassination and the days that followed. You can almost hear the hiss of the gaslights and smell the acrid tobacco smoke in the air as Swanson recreates scene after scene. "Manhunt" is popular history at its absolute finest.

Kwan
5.0 out of 5 stars Written like a Crime Thriller
Reviewed in the United States on July 4, 2017
Verified Purchase
Swanson gives a very vivid and detailed account of the 12 days JWB was on the run. It truly felt as if the manhunt was happening right before my eyes.

The prose made the book felt like a NYT bestselling crime thriller. Swanson fully captures the readers attention immediately and never let's it loose from his grasp. Swanson does not write a mini biography on Lincoln or Booth, but instead focuses almost entirely on the manhunt, which is what separates this book from others. Its narrow and complete focus makes capitivating details easy to remeber, and unleashes an insatiable desire for more information.

One thing that I wished there was more of would be accounts of the failed raids and deaths of those involved in searching for Lincoln. Dozens of volunteers and soldiers met their demise while searching for the killers through swamps and in other inhospitable terrain. Also, the death of Lafayette C Baker is unfortunately inadequately covered. I'm not a fan of the conspiracy theory involving Baker and Stanton and consider it hogwash but it would have been a felicitous excerpt.
Read more
4 people found this helpful
Helpful
Report abuse
See all reviews

Kiriyama77
5.0 out of 5 stars Thrilling page turner!
Reviewed in the United Kingdom on March 11, 2016
Verified Purchase
I have only recently gotten interested in the civil war and the assassination of Abraham Lincoln, but like most people I know the basics - John Wilkes Booth killed him and was killed himself. This book goes into the details of the assassination, from the planning to the execution to the escape, that is so interesting.
Through various sources we discover what made Booth want to kill the President, the people he brought into his plan, the excellent escape plan he had and the pretty stupid mistakes he made during it. We learn about his 12 days on the run and the people who both helped and betrayed him. We learn about the steps the Government took to try and capture this man, growing more desperate by the day!
This book is so well written you actually feel like you're there in the time, witnessing it all first hand. There is hardly a boring paragraph in the book and of you have a completely free day or two it will be easy to finish the book in that time, not because it's simply written but because you won't want to put it down.
The author himself I have seen on several documentaries on Lincoln and Booth and he, while I forget the details about what he does exactly, does, at least seem to, know what he is talking about. The man has done his research and presents it here as a thrilling read.
Highly recommended!
Read more
One person found this helpful
Report abuse

Mr. R. Safadi
5.0 out of 5 stars For what you believe in
Reviewed in the United Kingdom on April 22, 2010
Verified Purchase
This was a cracking book to read from start to finish. There is never a dull moment as the pace of the story told is perfect with alot of information I never knew of before. The amount of research put into making this book is very impressive and makes it the great book that it is.

There is nothing more interesting than reading about characters like booth who we all are fascinated by. People love heroes but the villain most of the time have something about them that's more interesting to read. Booth was a young actor who had it all at the palm of his hands but gave everything up for what he truely believed in.

world watcher
5.0 out of 5 stars Non Fiction Thriller
Reviewed in the United Kingdom on November 6, 2015
Verified Purchase
Reads like a spy novel but is non-fiction. Of course, it helps that almost every American knows about Abraham Lincoln, so the author can get right to the action. This is one of the handful of non-fiction books I would recommend to take to the beach!
Read more
Report abuse
See all reviews