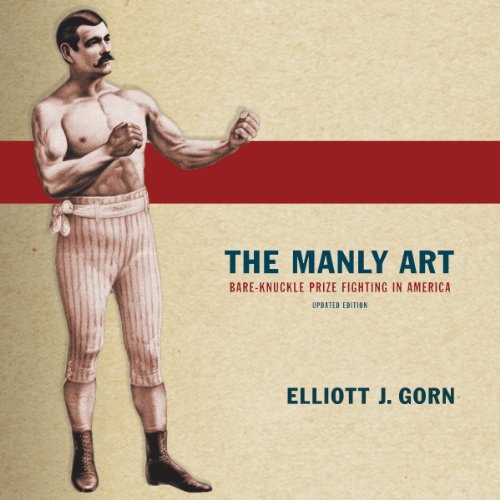 Miroku Nemeth
5.0 out of 5 stars Important for the working class history and the history of the sport of bare-knuckle boxing.
Reviewed in the United States on February 8, 2015
Verified Purchase
This is essential reading if one wants to understand working class history in America as well as boxing. The fact that Gorn has also written a book on Mother Jones should be a great indicator of the characteristics of this work.

One of the most profound insights I have gleaned from reading "The Manly Art: Bare-Knuckle Fighting in America" is the place of ritualized and symbolic violence in societies over time. Men crave the order of violence with rules and attach elevated importance to such contests in part because so much of life is entirely unjust, oppressive, mundane, etc. Violence is not something one, no matter one's level of expertise, can actually entirely plan for. It is chaotic, often in a brutal way, often in a deadly way, as anyone who knows a bit about violence knows all too well. I can think of many tough young men dead young now. I can think of innocents dead now. The symbolism of the ring, or the octagon, or in our narratives of glory enshrined in whatever form--from soundbite to epic poem--gain resonance because they appeal to our desperate need for order out of the desperate appearance of chaos, for a struggle, if not for a taste of our hero's invulnerability, for a portion of his honor and nobility. Gorn ties this drive, over time, to the class struggle both in England and America, and how the working class who fought for workers rights often identified closely with great fighters and bare-knuckle boxers. This is not a mindless voyeuristic venture into violence, this study, it is a glimpse into the reality of working class heroes that perhaps many who purport to be their champions among the liberal class would rather shy away from.
Read more
2 people found this helpful
Helpful
Report abuse

Andrew Carrig
3.0 out of 5 stars Good material marred by errors
Reviewed in the United States on January 3, 2015
Verified Purchase
The material is great although I feel it gets a little too tangental but I am not sure if it was just my edition (the updated Kindle version) but there were a ton of misspellings which was especially disheartening when it comes towards names and places. It really makes me wonder if dates and such were correct as well. Still a better editor, if there was one was definitely needed.
Read more
Helpful
Report abuse

chef meg
4.0 out of 5 stars Required for class, but an interesting read
Reviewed in the United States on January 27, 2014
Verified Purchase
A little dry in parts, but I would be surprised if there is a more detailed book on the history of bare-knuckle fighting and boxing. It was a requirement for my history of sport class, and it was interesting to read about the development of the sport, and the impact it had on American culture and vice-versa.
Read more
2 people found this helpful
Helpful
Report abuse

Tony Rocha
4.0 out of 5 stars Social history vs. Sport history
Reviewed in the United States on April 9, 2013
Verified Purchase
Very interesting information about bare-knuckle fighting, packed with social backgrounds that influenced the sport, the fighters, and the interests that promoted it. If you are looking for a strictly sports history book, this may not be the one you're looking for...but if you wish to understand the backdrop of 19th century American society and it's influence on prize fighting, you will be more than satisfied...
Read more
2 people found this helpful
Helpful
Report abuse

Jeremy
5.0 out of 5 stars ... up to scratch.
Reviewed in the United States on November 28, 2009
Verified Purchase
Title says it all... The Manly Art reads like a brutal trip through time, extraordinarily well researched and written. I can't speak highly enough of this exquisite work which enthusiastically drew me up to scratch from first page to last. History as it should be written, in that I'll never look at a boxing match the same way again. A true pleasure, and a well deserved 5 stars.
Read more
One person found this helpful
Helpful
Report abuse
See all reviews
Back to top
Get to Know Us
Make Money with Us
Amazon Payment Products
Let Us Help You
EnglishChoose a language for shopping. United StatesChoose a country/region for shopping.
© 1996-2021, Amazon.com, Inc. or its affiliates