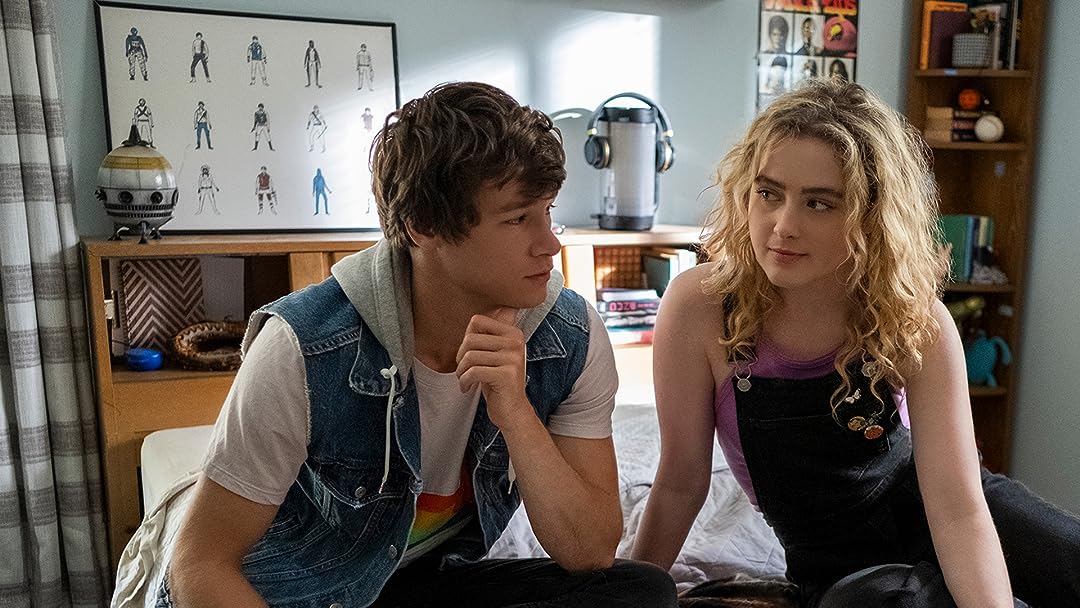 The Map of Tiny Perfect Things

(1,883)6.81 h 39 min2021X-RayHDRUHDPG-13
Quick-witted teen Mark (Kyle Allen) is contentedly living the same day in an endless loop when his world is turned upside-down by the mysterious Margaret (Kathryn Newton), also stuck in the same loop. What follows is a love story with a fantastical twist, as the two struggle to figure out how – and whether – to escape their never-ending day.

Amanda SimopoulosReviewed in the United States on February 12, 2021
2.0 out of 5 stars
Spoiler alerts
Verified purchase
If this movie had come out 3 years ago or I was a different person maybe I would have liked this movie. It is creative but incredibly idealistic and unrealistic. I know that fiction movies don't have to be realistic if they don't want to be. I lost my mom the same way that this girl lost hers and I didn't get to relive that day over and over again until I was ready to move on without my mom because that doesn't happen and there's no such thing as being ready and no little seventeen-year-old romantic crush on some guy is going to make someone ready to move on from losing their mom when they thought they had more time. I hate that there was no trigger warning for this movie. It made it seem like it was some cute little romantic Valentine's Day movie and if I had had any idea how badly it was going to trigger me I would never have watched it.
302 people found this helpful

RascalCateReviewed in the United States on February 12, 2021
5.0 out of 5 stars
An Imaginative Story Of Love And Life As A Singularity Starting Point
Verified purchase
No Groundhog Day Redux, "The Map Of Tiny Perfect Things" is a poignant reminder of how beautiful and imperfectly beautiful life itself is. The chain of singular moments we experience as we live out our lives show the beauty of our brief time here. Each moment intertwines and forms our human experience.

The storyline is sweetly whimsical while it contemplates a day relived endlessly in a fourth dimension and beyond; the tesseract. And illustrates well that everything we seek is right here. We just need to realize that.

As in the fifth dimension, this movies reveals all paradoxes resolved when "I" versus "you" transposes to collective consciousness "we."

DSReviewed in the United States on February 12, 2021
5.0 out of 5 stars
Tiny Perfect Film
Verified purchase
"The Map of Tiny Perfect Things" is a really awesome movie. Both actors have incredible chemistry and add to the overall script of the film. At times, the movie lags for about 2 minutes at a time, but it all builds up to a really poignant and terrific ending. If you like "Groundhog Day" themes with a twist of teenage coming-of-age, definitely watch! Perfect for Valentine's Day weekend and the likes.
138 people found this helpful

Avid readerReviewed in the United States on February 12, 2021
4.0 out of 5 stars
A certain sweetness to this movie
Verified purchase
This is a movie suitable for the entire family, with references to the movie Groundhog Day. Mark finds himself in a time loop, and suddenly sees Margaret who seems to be in the same time loop. He seeks her out, and indeed they are in the same loop. There is a lot funniness with Margaret’s driving and as she says, it doesn’t matter if one smashes the car, as the next day it is back to before. Every midnight, the day is rewritten. They seek an answer as to why this time displacement is happening, and Mark decides if they fly far enough, they can break the cycle. So he and Margaret get on a flight to Tokyo, thinking that crossing the International Dateline will break the loop. But Margaret decides to get off the plane and Mark finds out the loop is not broken. He also discovers why Margaret left the plane. So the rest of the movie is whether they are stuck, or is there a way out? Margaret learns there really is a pattern to what is happening, and that one needs to make things perfect to break the loop. But can things be made perfect? The movie is very pleasant and enjoyable.
75 people found this helpful

TreesReviewed in the United States on February 13, 2021
5.0 out of 5 stars
It’s a sweet yet deep film
Verified purchase
I personally enjoy Time Loop movies/tv shows.

I would say the time loop premise is more metaphorical, it’s more about most people going about their lives with proverbial blinders on, without taking in all of the beauty and lovely simple moments life has to offer.

The time loop also occurs while the dying person is still living, going to the hospital, seeing the person in the hospital bed, over and over and over again, becomes a routine, until they’re gone and life becomes a bit fuzzy and hazy, sometimes feeling like you’re underwater, not really hearing or seeing or processing what’s going on around you.

If a film ‘triggers’ you, then there is still more healing to be done within.

Seek to heal and strengthen within rather than walking around always ready to burst due to outer circumstances.

You are stronger than you believe yourself to be. Art can help to heal.

Life won’t always arrange itself in ways you want but you might miss out on what you truly need if you avoid every situation that may be triggering to an emotion within.

Process those emotions, seek to understand them rather than fear them.
61 people found this helpful

Bhatta's ReviewsReviewed in the United States on February 12, 2021
5.0 out of 5 stars
Stuck in a loop!
Verified purchase
This movie is based on a short story by Lev Grossman from his 2016 book [[ASIN:B08T97NM62 The Map of Tiny Perfect Things]] The movie is unique even-though at it's heart this is still actually a regular 'high-school' love story. The movie starts with a high school student Mark (Portrayed by Kyle Allen) with his timeline already on repeat and stuck in a loop (presumably caught in a singularity anomaly of some sorts) wherein he is seen to live just one day of his life and repeat *this* just one day life over and over again endlessly.

Then one day or technically speaking, (on that day) he finds a girl Margaret (character portrayed by Kathryn Newton) who is seen to be "clearly out of place" at the same public pool which he knows too well.. After following her and questioning her he finds that she too is stuck in the same singularity loop just like him. Thus begins a love affair that is worth watching.

What I liked about this movie is that while it is just another high-school crush love story that we have seen over and over again in various other movies this one is cute, well pictured & both the newcomers have good chemistry between them and that is why I feel it is a clean sweet movie to watch.

Rating it with five stars!
58 people found this helpful

Loves to ReadReviewed in the United States on February 12, 2021
5.0 out of 5 stars
Tiny Perfect Movie...you will understand especially if you remember your first irrevocable loss
Verified purchase
So much to like about this movie...the two main actors have good chemistry with each other but even more important is how we see them when they are alone. The auxiliary actors are all delightful (especially the guy’s friend). You will also enjoy the tiny perfect moments (and movie makers....it is NOT an eagle). It is similar to Groundhog Day in that the solution to the puzzle of this temporal anomaly is a personal realization. This truly was a delightful film for Valentine’s Day. Spoiler alert**!!!!....I was thinking about this film and I remembered my first really irrevocable loss...I was just a little older than the characters. There is that moment when you want the world to stop spinning, just stop spinning on its axis. If it just stops you can pick up the pieces of your heart.
26 people found this helpful

Amazon CustomerReviewed in the United States on February 12, 2021
4.0 out of 5 stars
An interesting, well crafted time-loop romance.
Verified purchase
There will be some Mr. Gumbys who kneejerk and say "durr it am Groundhog Day ripoff durr." Well, Groundhog Day was a "ripoff" of the story/short film 12:01pm, and cries of "ripoff" are typical really of 12 year old boys who are just starting to see the patterns of life, are angry due to their biological changes, and who don't yet know that life does indeed have precedents. Moreover, the film namechecks GD in addition to Edge of Tomorrow (which itself was an adaptation of All You Need is Kill). What we are seeing here is a different take on the emerging time-loop narrative. The concern then is what you do with it. GD and EoT are classics, and I understand that Palm Springs is great as well. Happy Death Day was fun, the sequel less so (likewise the 12:01 feature length TV movie). This new movie here is closer to EoT in quality.

All of the performances are very strong and naturalistic. The visual quality also goes for a wide and naturalistic color palette, sometimes with soft lighting, sometimes with harder lighting. The DP also changes things up with only occasional handheld to go with tracking shots and stationary bits. It's paced in a breezy way, which works well with the summertime frame: they may be stuck in a mundane day, but there is a casual joy to the little bits that they find, reflected in the pacing. As to the script, it is not one the level of deepness that GD has, but it strives for something different structurally in the final act (and I do wish they had done a little more with Margaret at that point). There are funny moments, cute moments, and some sad moments.

Ultimately, it is worth your time.

I must criticize the one star and two star reviews that exist so far. The one star review came from some Mr. Gumby-type complaining about "woke pandering". Uh, no, Dunce-inane, that wasn't "woke pandering." The fact that you thought so, and felt the need to post a negative review, proves that the people who hate "woke" have no idea what it means, in addition to being simultaneously insensitive and snowflakes. Grow up and spend some time at the library. As to the two star review . . . seriously, you're going to trash the movie because it dares to be a metaphorical take on grief? You, also, should spend some time at the library.
23 people found this helpful
See all reviews
Back to top
Get to Know Us
Make Money with Us
Amazon Payment Products
Let Us Help You
EnglishChoose a language for shopping. United StatesChoose a country/region for shopping.
© 1996-2021, Amazon.com, Inc. or its affiliates