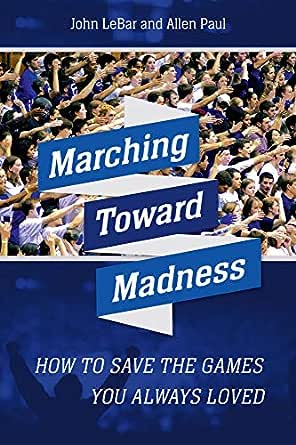 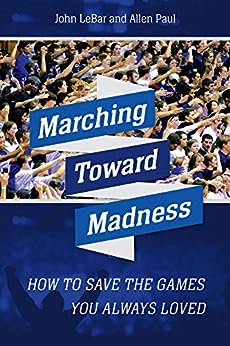 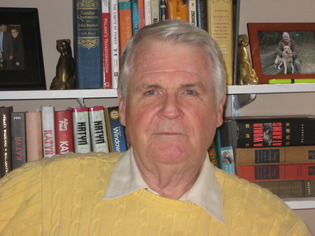 Marching Toward Madness: How to Save the Games You Always Loved Kindle Edition

... LeBar and Paul argue for a return to the age of the scholar-athlete, men like Justice Byron “Whizzer” White and Paul Robeson who lettered in the varsity but also scored high marks. In a string of player profiles, LeBar argues that athletics can teach leadership and character, leading to postgraduate success. --Ben Steelman, Wilmington Star News --This text refers to the paperback edition.

John LeBar earned his doctorate in education at Duke University where he coached varsity tennis and later served as director of undergraduate studies.

Allen Paul earned a graduate degree in international politics from the School of Advanced International Studies at Johns Hopkins University. After college, he worked for the Associated Press and later as a speechwriter in Washington, DC. --This text refers to the paperback edition.

5.0 out of 5 stars
5 out of 5
22 global ratings
How are ratings calculated?
To calculate the overall star rating and percentage breakdown by star, we don’t use a simple average. Instead, our system considers things like how recent a review is and if the reviewer bought the item on Amazon. It also analyzes reviews to verify trustworthiness.

Anne G
5.0 out of 5 stars College "Sport" is truly threatened!
Reviewed in the United States on May 25, 2020
Verified Purchase
As a college athlete in the late 50's and a national championship coach over a period of 4 decades, I have closely watched the erosion of the term "student athlete." The amateur of today tends to feel "Entitled!" Our non-profit Universities are running tax-exempt big business within them - college sport is a prime example! Television and the incredible rights fees it generates has tended to give us a warped sense of values. The facility "arms race" is obscene, and in 40 states, a college coach is the highest paid official. The incentive to cheat and bend the rules can be overwhelming. The health of the athlete can be sacrificed in the heat of battle. The problem is bigger than a college President, or even a consortium of such can successfully address! It is no one's fault - it has just progressively happened. The NCAA is trying, BUT can it really control the big money TV revenue Power 5 Conferences? The Corona Virus could unfortunately be a true test of the school truly caring about the athlete - if a couple of cases appear in a large-number sport like football, will the schools respond quickly enough to effectively slow it down if it means cancelling the season and the TV income it brings in? Allen Paul and John LeBar have captured the problem in their classic, "Marching Toward Madness!" The historical side of abuses in college athletics is brought to life with individual "case histories." Without dramatic change, the college sports world at the highest level could self-destruct. We must find a way to bring sanity to top-level college sports. The $64,000 question: "Is where we are today really the mission of a college education?" This book is a Must Read for any fan of college sport. Dick Gould, Emeritus - Stanford University Tennis
Read more
2 people found this helpful
Helpful
Comment Report abuse

Thomas J. Bolch
5.0 out of 5 stars Don't pay. Educate.
Reviewed in the United States on September 3, 2020
Verified Purchase
Marching Toward Madness details the history of college sports and the athletes that play without pay. Instead of giving them a salary, find a better way to ensure that they stay in school and complete their higher education. The payoff to the vast majority of college athletes and to the rest of the nation as a whole will be much greater. John LeBar (retired tennis and fencing coach at Duke University) and Allen Paul (retired Associated Press news writer and author) trace the history of college sports and tell the stories of athlete scholars who have achieved great success both on and off the playing field.
Read more
One person found this helpful
Helpful
Comment Report abuse

Kevin J. Bryan
5.0 out of 5 stars Timely
Reviewed in the United States on April 14, 2020
Verified Purchase
The cancellation of the 2020 March Madness provided the perfect backdrop for reading this book. Maybe this is the time to seriously consider enacting the well reasoned reforms proposed by the authors. An interesting read for both fans of sports and fans of academics.
Read more
2 people found this helpful
Helpful
Comment Report abuse

James Jordan
5.0 out of 5 stars A must read if you love college sports!
Reviewed in the United States on July 22, 2020
Verified Purchase
The book, Marching Toward Madness, is a very interesting and insightful account of the current state of affairs in college athletics.
Read more
One person found this helpful
Helpful
Comment Report abuse

Greenadvocate
5.0 out of 5 stars College athletics: Change is imminent
Reviewed in the United States on May 10, 2020
A lone dissenting voice amidst the growing consensus that college athletes should be compensated for their contributions, "Marching Toward Madness: How to Save the Games You Always Loved" dives deeply into the good, the bad and the ugly of collegiate athletics in America. This book -- part history, part call to action for reform of a broken system -- shows how things got off track and recommends ways to get back on track. Coauthors John LeBar, a beloved, long-time winning tennis coach at Duke University, and Allen Paul, a gifted writer and student of history, make the compelling case that major college sports are on a collision course with destiny. Rather than being the revenue generators as widely believed, athletic programs actually suck university budgets and prop up a system that turns students into fan(actics) while depriving the student athletes of even a semblance of an education. The cover photo provides an alarming snapshot: with arms of fans saluting mindlessly, resembling Germans at a Nazi rally during World War II. Drawing lessons from the past with vivid accounts of such star athletes as Paul Robeson and Byron "Whizzer" White, LeBar and Allen call for a movement in which decency, common sense and old fashioned character return to campus, benefiting everyone, but most especially athletes. This fascinating and readable volume couldn't have come at a better time. During this COVID moment of reflection, recalibration and revision -- with courts and fields silent -- change is both in the air and imminent.
Read more
2 people found this helpful
Helpful
Comment Report abuse

Babs T
5.0 out of 5 stars Student Athletes Prepare for a Meaningful Way of Life and Learning
Reviewed in the United States on April 18, 2020
Marching Toward Madness, by John LeBar and Andrew Paul, is a significant contribution in unexpected ways to popular, as well as, academic literature regarding college athletics. First, we have to disclose that we have known Coach John LeBar over a number of years. This book has a primary message as well as a secondary message on which we will comment in this review: Participation in college sports has the potential to prepare one for life despite harsh criticism of the influence of big money on institutions of higher education as well as on the pre-eminent entertainment value of sports. Coach LeBar presents a series of inspirational case studies which demonstrate that engagement in college athletic programs can sharpen the moral compass that student athletes bring with them to college studies, channeling their sports interests in a manner that prepares them for a meaningful way of life and learning. LeBar and Paul set this engagement within a broader contextual framework, ending up with a series of specific reforms that improve oversight of those varsity sports programs such as football and basketball that produce significant revenue.
Read more
3 people found this helpful
Helpful
Comment Report abuse

good
5.0 out of 5 stars The problems with money in College Athletics, History and Possible Solutions
Reviewed in the United States on April 21, 2020
I bought the book because I was very interested in sports, especially collegiate, and the changing nature of the games and how money has infected and affected some of the great institutions of higher learning. What I found most interesting is the personal stories of the former student athletes Coached by John LeBar on the Duke Tennis team. To say that these former players have lived interesting and impactful lives in a huge understatement. The book discusses in depth the looming concerns with the current topic of "Paying" NCAA athletes today and the potential pitfalls. A great read for any who are interested in sports and especially the problems facing colleges and future student athletes.
Read more
3 people found this helpful
Helpful
Comment Report abuse
See all reviews