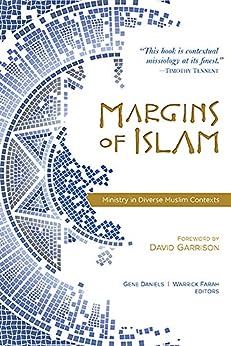 "Here—at last!—is a book that takes seriously the bewildering diversity among Muslims worldwide and explores responsibly the missiological implications of these diverse contexts. This is a terrific book which deserves a wide readership.  Harold Netland, PhD, professor of philosophy of religion and intercultural studies, Trinity Evangelical Divinity School.  This book raises huge questions about how we should understand Islam, how we should teach Christians about Islam, and how we should communicate with Muslims. While it doesn't provide neat answers, it's a model of what's involved in reflecting seriously on long-term Christian engagement with Muslims." -Colin Chapman, MPhil, professor of World Christianity and president, Asbury Theological Seminary
--This text refers to the paperback edition.

Gene Daniels, DLit et Phil, is a missiologist whose specialty is qualitative research in the Muslim world. Previously, he and his family were church planters among Muslims in Central Asia for more than a decade. He is the author of numerous articles and books on Christian mission.

Warrick Farah, DMiss, serves as a missiologist and theological educator in the Middle East with One Collective (onecollective.org). Focusing on MBBs, Warrick's research on conversion, theological paradigms of witness, and "insiderness" has been published in journals such as EMQ, IJFM, and Global Missiology.
--This text refers to the paperback edition.

4.4 out of 5 stars
4.4 out of 5
20 global ratings
How are ratings calculated?
To calculate the overall star rating and percentage breakdown by star, we don’t use a simple average. Instead, our system considers things like how recent a review is and if the reviewer bought the item on Amazon. It also analyzes reviews to verify trustworthiness.

Karl Dumas
5.0 out of 5 stars A real eye-opener
Reviewed in the United States on January 16, 2020
Verified Purchase
Like probably a lot of people, I assumed that most Muslims had pretty much the same religious culture—even though at some level I knew that couldn’t be true. After all there are Shiites and Sunis, and there are obviously some differences or there wouldn’t be two different groups.
I’m familiar with different denominations in Christianity, so I think I must have at least suspected that within Islam there were probably the same types of different interpretations. I have long been interested in missions, and have actually worked with Muslim converts in the past, so the title Margins of Islam: Ministry in Diverse Muslim Contexts (Gene Daniels and Warrick Farah, editors, William Carey Publishers, 2018) was especially intriguing.
The reader is asked to ponder who it is that represents Islam, and how Muslims shape and use Islam. And then a number of different writers and missiologists describe Islam in various parts of the world, and how the different cultures influence how Islam is practiced in that particular part of the world.
The final chapters talk about what we can learn from the ‘Margins’ as discussed in the preceding chapters, and how we can apply it in the context of contemporary missions.
This book was a real eye-opener for me, and I highly recommend it for anyone who dares go beyond the stereotype of Islam—that is anyone interested in a more comprehensive view of the people who practice the religion
5/5
Read more
One person found this helpful
Helpful
Report abuse

Dr. J
5.0 out of 5 stars An exceptional contribution
Reviewed in the United States on December 4, 2018
Verified Purchase
The critical contribution of this volume is the seminal idea of “adaptive missiology”—a missiology that begins with the assumption that each people group is so distinctive that no one “religious system” (ie. Islam) can adequately define the nature of a local worldview and way of life. Therefore, a presentation of the gospel in each context requires personal relationship and learning essential to discern the local values, habits of life, and idolatries that characterize this particular expression of Islam, before a “unique and sufficient message of the Cross of Christ is Proclaimed.” This is an exceptional contribution to conversations on the global mission of the church to Muslims, and a must read for anyone engaged in such ministry.
Read more
One person found this helpful
Helpful
Report abuse

Mike B
5.0 out of 5 stars Adaptive missiological engagement is a much needed corrective
Reviewed in the United States on February 25, 2019
Verified Purchase
I'm very grateful for this book, especially for the second-to-last chapter on Adaptive Missiological Engagement with Islamic Contexts. The authors have done an excellent job showing the problems of approaching religions from an essentialist position, especially in reference to Islam, and they give us a road map for how we can reflect theologically and missiologically in various Muslim contexts in order to share the good news, make disciples, and multiply churches more effectively.
Read more
One person found this helpful
Helpful
Report abuse

Lynn Nielsen
5.0 out of 5 stars Individualized outreach
Reviewed in the United States on January 16, 2019
Verified Purchase
Very in depth compilation of works and suggestions to broaden mission approach to Muslims. It's not a one-size-fits-all approach.
Read more
One person found this helpful
Helpful
Report abuse

Missions Catalyst
4.0 out of 5 stars When Islam doesn't look like what you were told to expect
Reviewed in the United States on October 17, 2018
If you’ve ever thought, “I know more about ‘Islam’ than this Muslim in front of me does,” you may have discovered for yourself the diversity of belief and practice in the Muslim world... which may not line up with what you had read, heard, or assumed.

In Margins of Islam, 16 thoughtful cross-cultural workers take us on a tour through a wide variety of Muslim communities.

These including contexts shaped by Sufism, animism, urbanization, colonialism, secularism, and nationalism and among North African Berbers, nominally Muslim Bosnians, Chinese Muslim youth, and Russified Central Asians as well as the Muslim communities in the UK, France, Indonesia, Thailand, Turkey, and elsewhere. Each author describes the historical and cultural factors shaping Muslims in that specific context and draws conclusions for ministry that may also apply in communities affected by the same dynamics.

Since the book is both academic and practical, you can use it for your own teaching, writing, or research and come away with things to think about, ask about, or explore in your relationships with Muslims, as well as finding clues on where to learn more.

A book in which every chapter is written by a different author has many advantages, though making it easy to review is not one of them. Some readers may not like the chatty tone in some chapters, while others find the more academic chapters hard to read. Overall, though, I think it holds together well and makes a strong contribution to practical missiology.
Read more
One person found this helpful
Helpful
Report abuse

J. R.
4.0 out of 5 stars A Window into Islam's Diversity
Reviewed in the United States on October 22, 2018
Margins of Islam is an important glimpse into the kaleidoscope of beliefs and cultures within the Islamic faith and worldview. The opening of the book discusses the complexity of Islam and the error of assuming that an Islamic identity or Islamic faith has one definite meaning. The book then demonstrates the diversity within Islam by focusing on 13 case studies from unique cultures and peoples within Islam.

The book's strength lies in its introductions to less known and less understood cultures.

The articles vary in tone and accessibility, but all are focused on aiding followers of Jesus interact with Muslim friends and neighbors in a way that takes each individual and each culture and each unique representation of Islam into account. This is an excellent addition to any cross cultural worker's library and can be used again and again as a way to familiarize oneself with different Muslim backgrounds. It offers a quick window into many cultures and worldviews.

Ideally for the academically minded cross cultural laborer this book will be a valuable reference for any believer who interacts with Muslim neighbors.
Read more
2 people found this helpful
Helpful
Report abuse
See all reviews