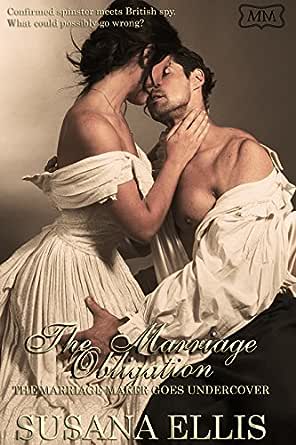 You've subscribed to The Marriage Maker! We will preorder your items within 24 hours of when they become available. When new books are released, we'll charge your default payment method for the lowest price available during the pre-order period.
Update your device or payment method, cancel individual pre-orders or your subscription at
Your Memberships & Subscriptions
There was an error. We were unable to process your subscription due to an error. Please refresh and try again. 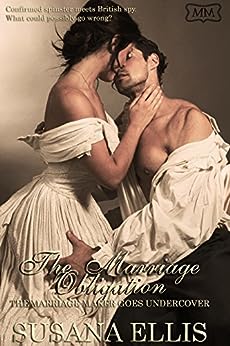 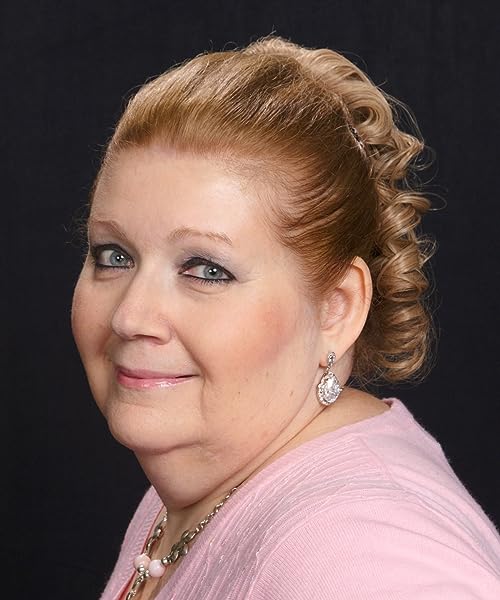 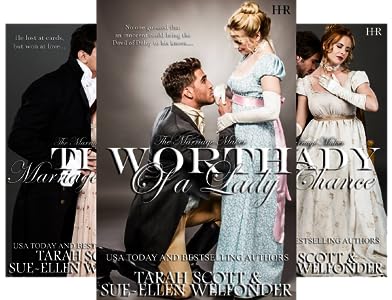 Angie Mike
3.0 out of 5 stars THE MARRIAGE OBLIGATION: The Marriage Maker Goes Undercover Book 4 of 4 (The Marriage Maker #12)
Reviewed in the United States on January 24, 2020
Verified Purchase
Setting: 1812, England

THE MARRIAGE OBLIGATION was a story that started out really well but by the halfway point had a hard time holding my attention. And even though it's the last in a four book mini-series (and the twelfth in "The Marriage Maker" series overall) it can easily be read as a standalone just fine. In fact, while our two matchmakers (Lady Elana aka The Raven & Sir Stirling) both make quick appearances early on, they are only minor roles and other than that we don't even see them again.

As for the story itself, it was somewhat disjointed and as the story progressed I found the pacing really odd. And while I prefer a story that doesn't take place in just a matter of days, the timeframe for this novella jumped all over the place. I couldn't even tell you how long everything took because it would go from days, to weeks, to months, and back again. As for Cornelia and Preston, I thought they were both really kind and lovable individuals. However, I didn't sense any real chemistry between them but instead I felt they made better friends than an actual couple. And other than a few kisses near the end there is virtually no passion and little romance between them either.

Still, I have to admit that I wanted them to find happiness however improbable it might have seemed. And though this novella does contain some subject matter that would be rather heart-wrenching most of the time, in this story it just failed to ever truly tug at my emotions. There was also the ending which was strangely abrupt and felt incomplete. Honestly, the characters are what saved it for me, but I'm not sure I'll read more by this author as the writing just did not flow well.

Kindle Locations: The story itself ended at 97% and location 1419 of 1463.
Read more
One person found this helpful
Helpful
Comment Report abuse

Mary Gallo
4.0 out of 5 stars Unsatisfactory emding
Reviewed in the United States on July 31, 2018
Verified Purchase
I like a conclusion, not and ending to my stories. This was a nice story, but the ending was not satisfactory. I feel that there was more to find out.
Read more
One person found this helpful
Helpful
Comment Report abuse

Carol Roddy
5.0 out of 5 stars Delightful book
Reviewed in the United States on August 3, 2018
Verified Purchase
This little gem is the right blend of sweet and spicy, with a sigh-worthy hero and a sympathetic heroine. The outcome was never in doubt but the journey there was an enjoyable ride.
Read more
Helpful
Comment Report abuse

VJP
4.0 out of 5 stars Short and sweet
Reviewed in the United States on August 18, 2018
This romance ended too soon. A marriage of convenience between two independent souls turns into love. This is a short and sweet novel and needs more than the abrupt ending, happy though it is.
Read more
Helpful
Comment Report abuse

M M-E
5.0 out of 5 stars The best laid plans
Reviewed in the United States on October 1, 2018
A marriage of convince takes a different turn when a couple realize they have feelings for each other. A secret, once revealed, could make a divorce more than possible.
A novella full of charm and hope.
Read more
Helpful
Comment Report abuse

Gloria
5.0 out of 5 stars Loved it!
Reviewed in the United States on September 12, 2018
This was a great story which I couldn't put down. I only wish it had been longer because I didn't want it to end.
Read more
Helpful
Comment Report abuse
See all reviews