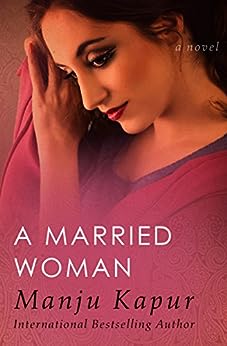 Astha has everything an educated middle-class Delhi woman could wish for yet she embarks on a powerful physical relationship with a much younger woman. Is she foolishly jeopardising everything - or simply throwing off the fear instilled in her by her parents, her husband, her social class? --This text refers to the paperback edition.

Manju Kapur is the author of four novels. Her first, Difficult Daughters, received tremendous international acclaim, won the Commonwealth Prize for First Novels (Eurasia Section), and was a number one bestseller in India. Her most recent novel, The Immigrant, was called 'intensely readable' in the Daily Mail and 'admirable and enjoyable' by the Guardian, and has been longlisted for the DSC Prize for South Asian Literature. She lives in New Delhi. --This text refers to the paperback edition.

3.9 out of 5 stars
3.9 out of 5
45 global ratings
How are ratings calculated?
To calculate the overall star rating and percentage breakdown by star, we don’t use a simple average. Instead, our system considers things like how recent a review is and if the reviewer bought the item on Amazon. It also analyzes reviews to verify trustworthiness.
Top reviews

Jatin bhasin
2.0 out of 5 stars A political commentary!
Reviewed in the United States on April 5, 2021
Verified Purchase
It’s not what I thought it was! Seems more like a political commentary. The first half of the book is interesting and makes for a good read but the second half seems to be rushed in terms of the plot and even the characters. It’s a decent read but it seems the author wanted to just finish writing the book after the second half! A bit disappointing but still, all books are worth a read.
Read more
Helpful
Report abuse

Kindle Customer
3.0 out of 5 stars Different
Reviewed in the United States on May 20, 2020
Verified Purchase
Whilst some serious issues were dealt with, I couldn't relate to what Ashta did. The style of writing was good. The story also brought some social issued to the forefront.
Read more
Helpful
Report abuse

Ushi
5.0 out of 5 stars Exploring Sexuality
Reviewed in the United States on April 21, 2021
Verified Purchase
The best part of the book is where your keenly want to read more but it ends ! Love it. Every bit of that book is amazing. More in details ❤️❤️
Read more
Helpful
Report abuse

Gunjan
5.0 out of 5 stars Awesome
Reviewed in the United States on December 5, 2011
Verified Purchase
Must read for Indian women....and men who will learn what women really want. It is very simple to answer the age old over rated question of what we really want.
Read more
4 people found this helpful
Helpful
Report abuse

Jennifer Cameron-Smith
4.0 out of 5 stars ‘Astha was brought up properly, as befits a woman, with large supplements of fear.’
Reviewed in the United States on September 27, 2014
Astha is an obedient middle-class girl growing up in Delhi during the 1970s. Her father wants her educated; her mother wants her to be settled into a safe, arranged marriage. While Astha’s family is not wealthy, they have hopes for the future. While Astha meets some males herself, and has a little more experience that her mother realises, she eventually agrees to an arranged marriage. Hemant seems kind enough.

‘She was a bride, and her grip of Hemant’s hand grew more certain, and the blush on her face more conscious.’
Astha has two children, and a job at a primary school, and for a while seems perfectly happy. She also paints. If the physical nature of her marriage has changed, this is not initially of great concern. Both Astha and Hemant are busy.

‘Life was shaping up nicely, with her mind and heart gainfully employed.’

But then Astha becomes involved in a theatre troupe run by Aijaz, a politically active man. This leads Astha to become more politically and socially aware, and she also begins to see her painting as something more than a genteel hobby.

‘Somewhere along the way Hemant’s attitude to Astha changed.’

As a consequence of growing community unrest, Aijaz and his theatre troupe are burned alive in their van one night. Astha joins the crowds in protest. Some months later she meets Aijaz’s widow Pipee, and they are drawn together. Fondness becomes love, friendship becomes complicated.

‘Why was it, thought Astha wearily, that love always had to be balanced by its opposite?’

Astha’s story unfolds slowly throughout this novel, details of her daily life serve to add depth to her development as a woman, to her frustrations and choices. By the end of the novel, Astha is a complex and complicated character, neither free of convention nor entirely entrapped within it. By trying to put the needs of others first, by being unable to celebrate her own achievements, Astha seems unable to completely take control of her own destiny.

‘She wanted to say yes, I have done it, I have sold my first painting, I have achieved something, let us celebrate, but the number of ‘I’s’ involved ensured that the words refused to leave her mind.’

This novel has stayed with me. Ms Kapur has managed to incorporate the stresses and tensions between the ties of tradition and the possibilities afforded by a more progressive life. The choices are not oversimplified: a progressive western education does not make it easy to move beyond the traditional, nor does visiting America. Life is more than culture, geography and history. Life is full of compromises. A thought provoking novel: well worth reading.

‘A trip abroad would be nice, no matter whom one loved and whom one left behind.’

Alan A
5.0 out of 5 stars Sheer brilliance!
Reviewed in the United States on February 23, 2005
Manju Kapur weaves an extraordinarily vivid tale of love, lust, longing, gender roles and family structures, set against the backdrop of communal violence and the South Asian family. A reader can instantly connect with the lead character of Astha, as she experiences the trials and tribulations of being a teenager, puberty, losing a parent, entering an arranged marriage, economic dependence, raising a family and finding her true passion through art, activism and love. Kapur's realistic style and emphasis on painting a detailed picture of a character's environment only make this novel all the more readable, and one of the most interesting fiction pieces I have read in a while.
Read more
9 people found this helpful
Helpful
Report abuse

Batul
4.0 out of 5 stars Enjoyable...
Reviewed in the United States on August 27, 2006
The story is much more than Asta's relationship with another woman, that only comes along near the end of the book. Kapur does a wonderful job dissecting the the everyday of an ordinary life, showing how even the ordinary in this generation can be claustrophobic. Kapur highlights how women were taught that caring for anything outside the small world created for you (whether it is in an ashram, your parent's house, or your husband's house) was not normal. The character of Asta struggles with this throughout the book, using her art and then eventual political activism to be a part of the world. Her affair is another outlet for this connection. I found the history fascinating and the story well written. This book does not have a packaged ending and offers no excuses for its story, so is refreshing and a fast read.
Read more
7 people found this helpful
Helpful
Report abuse
See all reviews

sonailz
3.0 out of 5 stars A Married Woman
Reviewed in the United Kingdom on August 10, 2012
Verified Purchase
Personally, not the best Manju Kapur novel. I have read all the rest and I can't honestly say I liked this one. I got a bit bored at times, the whole woman - woman relationship idea didn't appeal to me. I also did not like the way the story ends...kind of left an empty feeling. Her other books like Difficult Daughters and Home are much better.
Read more
Report abuse

Kindle Customer
1.0 out of 5 stars Not good
Reviewed in India on June 10, 2021
Verified Purchase
No story to enjoy. Just trying to make it full of physical relationship n that also not done tastefully. So what was the author trying to say, ending so abruptly.
Read more
One person found this helpful
Report abuse

sanjay biswal
5.0 out of 5 stars Very good
Reviewed in India on March 29, 2019
Verified Purchase
The boldness of the writer is in full flow here which are still kind of taboo. Nobody descibes the domestic life better than Manju Kapoor.
Read more
2 people found this helpful
Report abuse

Amazon Customer
2.0 out of 5 stars Not what is says (sadly)!!!
Reviewed in India on July 12, 2019
Verified Purchase
I had difficulty to gather the plot. Was it about bored housewise or fiesty widow? I cant say. Most of the pages were full of political thing not relevent to the story 70% of book is about it.
Read more
One person found this helpful
Report abuse
See all reviews