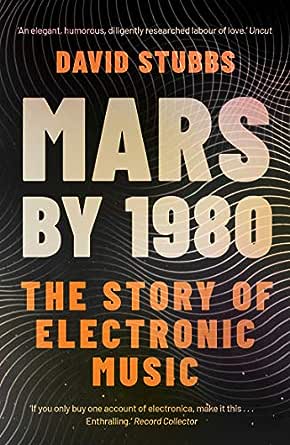 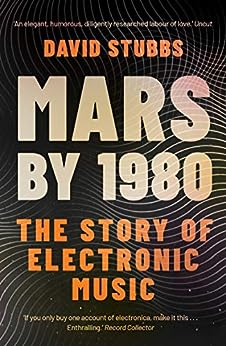 Mars by 1980: The Story of Electronic Music Kindle Edition

"Bewitching . . . fascinating"―New Statesman
"If you only buy one account of electronica, make it this" ―5***** Record Collector

Music journalist Stubbs (Fear of Music)</i< admirably pulls together various fields of electronic music into a cohesive history. Stubbs starts this trenchant survey with the machine-obsessed, neo-fascist futurist composers, such as Arseni Avraamov and his 1922 Symphony of Sirens before working through pioneering midcentury found-sound and recorded-loop composers such as Pierre Schaffer and Edgard Varese, who would later inspire Frank Zappa, among many other musicians. Stubbs weaves criticism throughout, declaring Karlheinz Stockhausen the greatest composer of the 20th century and noting how postwar electronic noodling sounded “redolent of antennae and Martian holidays, and hovercars.” Stubbs amps up the narrative once disco and punk hit the scene, approvingly describing No Wave commandos Suicide as “anti-tainers, dispensing sonic flamethrowers from the stage,” as well as in capturing the chilling sounds of such electro-pop innovators as Brian Eno, Depeche Mode, and Kraftwerk. Stubbs expertly weaves granular encyclopedic detail into a sweeping cultural history in this astute and entertaining study of how a fringe music form entered the mainstream. Agent: Kevin Pocklington, North Agency. (Nov.)

"David Stubbs surveys a century of electronic music in discursive rather than encyclopedic fashion. It's an elegant, humorous, diligently researched labor of love, full of sharp connections"―Uncut --This text refers to the hardcover edition.

Praise for Future Days:
“A massive answered prayer… Well-researched, well-written, intensely detailed, and oftentimes gripping."―Kirkus Reviews
"The rollicking energy of his prose and reeling majesty of his imagery convey everything about this music that transcends time and place.”―Simon Reynolds, author of Retromania and Rip It Up and Start Again --This text refers to the hardcover edition.

David Stubbs is a British author and music journalist. Alongside Simon Reynolds, he was one of the co-founders of the Oxford magazine Monitor before going on to join the staff at Melody Maker. He later worked for NME, Uncut and Vox, as well as the Wire. His work has appeared in The Times, Sunday Times, Spin, Guardian, Quietus and GQ. He has written a number of books, including a song-by-song profile of Jimi Hendrix and Fear Of Music: Why People Get Rothko But Don't Get Stockhausen, a comparative study of twentieth-century avant-garde music and art. He lives in London. --This text refers to an out of print or unavailable edition of this title.
Read more