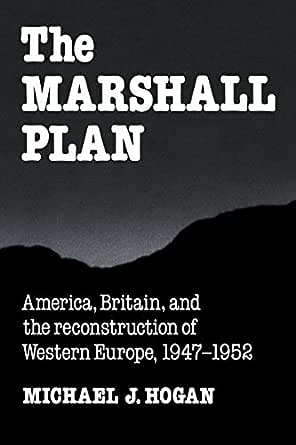 The Marshall Plan: America, Britain and the Reconstruction of Western Europe, 1947–1952 (Studies in Economic History and Policy: USA in the Twentieth Century) Kindle Edition

Flip to back Flip to front
Audible Sample Playing... Paused   You are listening to a sample of the Audible narration for this Kindle book.
Learn more
ISBN-13: 978-0521378406
ISBN-10: 0521378400
Why is ISBN important?
ISBN
This bar-code number lets you verify that you're getting exactly the right version or edition of a book. The 13-digit and 10-digit formats both work.

The European Recovery Program or Marshall Plan was a massive American-aid package designed to help the war-torn countries of Western Europe after WW II. Hogan, who teaches at Ohio State University, describes the plan from its inception through congressional enactment and analyzes in detail the methods by which it was put into action. His study goes far beyond description and analysis. Hogan's ambitious, closely reasoned and strongly supported argument is that the Marshall Plan was an outgrowth of organizational, economic and political trends that had already forged American business methods before World War II, and that the plan was a bold attempt to project the American corporative-political economy across the Atlantic. The author brings into sharp focus "the triumph of the traders' approach," an important turning point in the history of the plan, and the problems of reconciling European recovery-aid with U.S. rearmament imperatives during the Korean War.
Copyright 1987 Reed Business Information, Inc. --This text refers to an out of print or unavailable edition of this title.

Hogan judges the Marshall Plan to be the most successful peacetime foreign policy carried out by the United States in this century. While this is not, perhaps, an especially courageous conclusion, considering our somewhat uneven record, the author's opinion and arguments have merit and so does his assessment of the period encompassing this $12 billion package of postwar aid to Europe. Whereas the United States had the expectation of creating a Europe in its own image, French and British interests had other, more independent intentions. The Marshall Plan ultimately did succeed in creating a stronger, multinational Europe, but it certainly did not do so in a way America had planned. A worthwhile purchase for most libraries, Hogan's work will no doubt become one of the seminal histories of postwar cooperation and development. Jeff Northrup, Birmingham P.L., Ala.
Copyright 1987 Reed Business Information, Inc. --This text refers to an out of print or unavailable edition of this title.

"As a detailed account of Anglo-American economic diplomacy in the early post-war era it has no rival." The Times Literary Supplement

"...goes far beyond description and analysis. Hogan's ambitious, closely reasoned and strongly supported argument is that the Marshall Plan...was a bold attempt to project the American corporative-political economy across the Atlantic." Publishers Weekly

"Hogan's book puts the Marshall Plan into its proper historical context, so that the view of it from its fortieth anniversary needs to be modified....there now exists for the first time a definitive study." International History Review

"With the publication of Michael Hogan's book we now have the first full diplomatic history of the Marshall Plan. The work is large in size and scope and as accurate and comprehensive in its coverage as could reasonably be expected. To my knowledge there are no relevant archival materials the author has left unexplored in the United States and the United Kingdom and he has used them well." Alan S. Milward, Diplomatic History

"Michael Hogan's learned and authoritative study of the European Recovery Program is the fullest yet written, not only in the sense of page numbers but also in the sense of illuminating important aspects of the subject that have been previously neglected." Business History Review --This text refers to an out of print or unavailable edition of this title.

A re-interpretation of the Marshall Plan, as an extension of strategic American policy, views the plan as the "brainchild" of the New Deal coalition of progressive private and political interests. --This text refers to an out of print or unavailable edition of this title.

The Marshall Plan presents the fullest account yet written of America's program to assist Europe after World War II - certainly the most celebrated and successful peacetime foreign policy pursued by the United States in the twentieth century. But as Michael Hogan shows in this rich and detailed book, the Marshall Plan was more than an effort to American aid behind the economic reconstruction of Europe. --This text refers to the paperback edition.
Read more

3.5 out of 5 stars
3.5 out of 5
3 customer ratings
How does Amazon calculate star ratings?
Amazon calculates a product’s star ratings based on a machine learned model instead of a raw data average. The model takes into account factors including the age of a rating, whether the ratings are from verified purchasers, and factors that establish reviewer trustworthiness.
Top reviews

Robert A. Berge
2.0 out of 5 stars Post World War Two to rebuild Berlin
Reviewed in the United States on April 10, 2014
Verified Purchase
This book must have been written for those who desire a technical/beurocatic look at planning for post war rebuilding. It talked very little, if any, about the feelings and desires of the people suffering and waiting for renovation.
Read more
3 people found this helpful
Helpful
Comment Report abuse

Mr. Jefferson Esq.
4.0 out of 5 stars A standard, well-written college style text
Reviewed in the United States on February 6, 2015
A standard, well-written college style text. Covers the details in a strong, technical manner. Meant more for students than the casual reader. Any college history major (upper level here, this is not the sort of book you tend to get with Western Civ 101) already knows this book without having read it because they have seen the style dozens of times. Exactly the sort of "this is how you write a college history text dealing broadly with a major topic" book one would expect, and fine place for a serious student to begin.
Read more
2 people found this helpful
Helpful
Comment Report abuse
See all reviews from the United States

Paul Thomas
5.0 out of 5 stars A "Must" for A level history
Reviewed in the United Kingdom on January 3, 2011
Verified Purchase
It is very difficult to review a book - it is often personal taste. In this case there are elements in the book which are very difficult to find elsewhere and can give your knowledge that "edge" in studying history.
Read more
Helpful
Sending feedback...
Thank you for your feedback.
Sorry, we failed to record your vote. Please try again
Report abuse