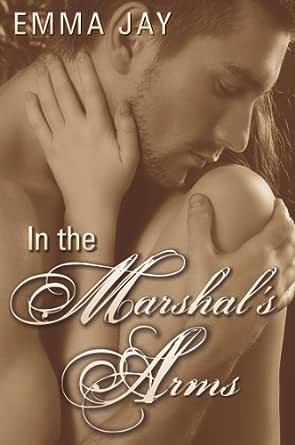 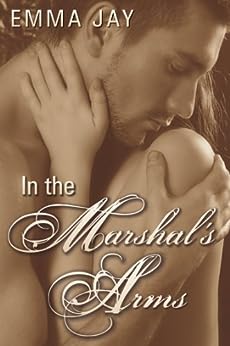 3.9 out of 5 stars
3.9 out of 5
40 customer ratings
How does Amazon calculate star ratings?
Amazon calculates a product’s star ratings based on a machine learned model instead of a raw data average. The model takes into account factors including the age of a rating, whether the ratings are from verified purchasers, and factors that establish reviewer trustworthiness.
Top Reviews

Jessica
5.0 out of 5 stars In The Marshal's Arms
Reviewed in the United States on August 9, 2012
Verified Purchase
Marshal Rhys Burgess finds himself working undercover as a hand on Maddy Colby's old beat-up farm, in an attempt to locate the bank robber Luke Colby and bring him in. Maddy Colby is not at all what he expected from a bank robber's mistress. She's a sweet girl despite her reputation with the local townspeople who treat her like she's a leper.

I'm not huge on historical westerns but every once in awhile, a hot cowboy tale hits the spot. I really liked Maddy, I thought she was authentic and I loved that she had a backbone. The Marshal was hot, and I appreciated that he was willing to see Maddy as she was rather than hold fast to what he originally assumed her to be. It was erotic without feeling like a slouch in the story department. This is a decent length (sixty pages) for a novella and was well paced. I didn't feel like the story was missing anything or was too short when I finished it. It ended feeling complete. An enjoyable read!
Read more
7 people found this helpful
Helpful
Comment Report abuse

c. westenberg
5.0 out of 5 stars my review my opinion
Reviewed in the United States on February 1, 2013
Verified Purchase
This was a good short story. It was a sweet romance story about a marshal & a young lady in the wild west. It's a western/romance and it was free so I gave it a shot and was surprised how much I really enjoyed it. Takes place further back in time, not quite sure on the era just know its in the past before cars. Just a really sweet story that surprised me when i really got into & was sad when it was over!
Read more
Helpful
Comment Report abuse

LindaNpines
4.0 out of 5 stars Tender yet hot
Reviewed in the United States on October 26, 2012
Verified Purchase
Although short in length, this story is not short on conflict or emotion. Ms. Jay's characters are a determined marshal on the trail for an outlaw and that outlaw's independent mistress whose tentative relationship barrels toward a tumultuous showdown. The sex is hot and Rhys' loving gesture brought a tug to my throat. Can't wait to read more by this author.
Read more
Helpful
Comment Report abuse

Evelyn
5.0 out of 5 stars In the Marshall's Arm, An Erotic Western Novella
Reviewed in the United States on September 6, 2012
Verified Purchase
I usually don't read stories that are so racy, but this one was really a good read. I also prefer longer books where the story has twist and turns, but this little novella was very satisfiying. It did have a story line and a plot that was good and the character development was really well done. Over all this was a nice read that I really did like.
Read more
One person found this helpful
Helpful
Comment Report abuse

M. Lapierre
4.0 out of 5 stars Would make a wonderful movie!
Reviewed in the United States on January 10, 2012
Verified Purchase
While reading this novella I could picture the whole story playing out as a movie-the drifter who's not who he says he is, the outlaw's lonely widow in a remote cabin who takes him into her home, her bed, her heart...until the truth comes out-even a classic shootout!

I have to say I'd love to read a prequel-more of Maddy's story and how she came to be the outlaw brothers' lover. I enjoyed the townsfolk's reaction to her because of her scandalous past. Fantastic story!
Read more
13 people found this helpful
Helpful
Comment Report abuse

LVgal
4.0 out of 5 stars Believable and charming, gritty characters.
Reviewed in the United States on October 29, 2013
Verified Purchase
Emma Jay never disappoints: her writing style, her story and her characters give the reader a chance to really feel the mood of her stories. You will really enjoy this book if you love a female character who triumphs over adversity, and has a an inventive outlook for her time. Loved it!
Read more
Helpful
Comment Report abuse
See all reviews from the United States

This has a story, has hot sex, but for me, it was 'user' sex on both sides. I didn't like that the female lead in this historical novel had been an actress, sleeping with guys that took her fancy, then ending up in a non-committed, non-exclusive menage with two brothers, and I didn't find myself warming to her at all.

Not a Keeper, but well-written and worth a read.
Read more
2 people found this helpful
Helpful
Sending feedback...
Thank you for your feedback.
Sorry, we failed to record your vote. Please try again
Report abuse

ReaderLoves
4.0 out of 5 stars Sexy novella
Reviewed in the United Kingdom on November 11, 2012
Verified Purchase
Sometimes the simplest concepts are the loveliest stories--lawman meets and falls in love with outlaw's woman, while hunting outlaw. The conflict is spot on. No over-engineering. No word wastage.
I enjoyed this sexy, romantic novella. Gave me exactly what it said on the box. :) I would've liked a bit more action for a western but it's a novella so it works well regardless.

Emma Jay is a new author to me. I look forward to reading more of her stories.
Read more
Helpful
Sending feedback...
Thank you for your feedback.
Sorry, we failed to record your vote. Please try again
Report abuse

dennis.fantham
3.0 out of 5 stars Three Stars
Reviewed in the United Kingdom on May 25, 2018
Verified Purchase
not really my type of book
Read more
Helpful
Sending feedback...
Thank you for your feedback.
Sorry, we failed to record your vote. Please try again
Report abuse

Dex
5.0 out of 5 stars in the marshals arms
Reviewed in the United Kingdom on September 12, 2015
Verified Purchase
Nice read and not bad for free
Read more
Helpful
Sending feedback...
Thank you for your feedback.
Sorry, we failed to record your vote. Please try again
Report abuse

Amazon Customer
5.0 out of 5 stars 5 star
Reviewed in the United Kingdom on February 22, 2013
Verified Purchase
an unusual western quite good the first one of its type that I have read, could be a bit longer in length but otherwise good
Read more
Helpful
Sending feedback...
Thank you for your feedback.
Sorry, we failed to record your vote. Please try again
Report abuse