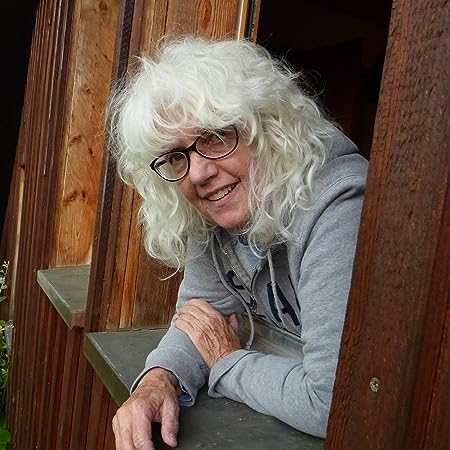 Martha Kennedy has published four works of historical fiction. Her first novel, Martin of Gfenn, which tells the story of a young fresco painter living in 13th century Zürich, was awarded the Editor’s Choice by the Historical Novel Society Indie Review and the BRAG Medallion from IndieBRAG in 2015 and short-listed for the Chaucer Award from Chanticleer Reviews in 2017.

Savior, The Brothers Path and The Price, novels in the historical fiction trilogy, Across the World on the Wings of the Wind, are all a BRAG Medallion honoree, brings the family to America in the mid 18th century. Savior chronicles the events in the life of Rudolf von Lunkhofen who goes on Crusade in 1244 hoping to save his soul. The next novel, The Brothers Path, recounts the experience of the six Schneebeli brothers as the Protestant Reformation intersects the life of their family. The final novel, The Price, examines the decisions and conflicts that bring the family to America in 1743.

Kennedy has also published poetry, short-stories and articles in a variety of publications. in 2022 she was awarded third prize for poetry in Stories from the Hidden Lake, a publication of the Alamosa Public Library. She's jazzed because her dad always hoped Martha would grow up to be a poet. She has also published a chapbook of poems dedicated to her father to show she has finally grown up.

Martha Kennedy has been a visual artist all her life, but over the winter of 2020/21 she launched a new "career" as an illustrator. An Alphabet of Place: The Little Snake River Valley by Sharon S. O'Toole features Martha's original ink drawings to illustrate each letter of the alphabet.

After a 35 year career teaching writing at the college and university level, Martha now lives with her dogs between two high mountain ranges in the remote San Luis Valley of Colorado. Her favorite thing in the world is cross-country skiing. She has a masters degree in English from the University of Denver. 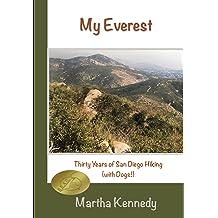 My Everest: Thirty Years of San Diego Hiking (With Dogs!) Jan 11, 2018
by Martha Kennedy
( 15 )
$0.99
In the 1980s, I moved to California from Colorado. I found work I loved and ended up staying there for more than thirty years. I always missed the Rocky Mountains.

Many of these stories are set in Mission Trails Regional Park, several thousand acres of coastal sage and chaparral. The landscape was one of the few remaining pieces of untouched chaparral so close to San Diego. To anyone who gets to know it it is a fascinating, complex, intricate, very alive wild world. It taught me to see.

About thirty miles east of the city were “real” mountains on which snow fell a few times every winter. I trekked those trails as often as I could.

Now I am back in Colorado. Every day I have the chance to get out somewhere I see and feel again how much I learned on the dusty trails of Southern California’s chaparral hills and the higher mountains beyond.
Read more
Other Formats: Paperback 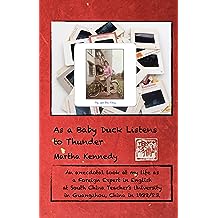 As a Baby Duck Listens to Thunder: A Foreign Expert in English, Guangzhou China, 1982-83 Jul 15, 2019
by Martha Kennedy
( 8 )
$0.99
As a Baby Duck Listens to Thunder is a love story.... My position as a Foreign Expert in English was my first real teaching job in a career that spanned more than thirty years. I could never have imagined China would be a destination in my life, but it was. And at such a moment in history! Chairman Mao had been dead only six years. The evil Gang of Four had been "tried" only the year before. The horrors of the Cultural Revolution were still close in everyone's memory, and people feared that the post-Mao moment of comparative freedom was a random blip. Deng Xiao Ping was determined that China would modernize and enter the world as a competitor. Every single penny of foreign exchange that came to China was used to buy technology to further China's modernization. I was one of those "bits of technology," too.Propelled by a consuming wanderlust, I took my ignorance and inexperience with me, and ended up receiving some of life's great gifts. My students' diligence, curiosity and courage inspired me, and, in turn, I inspired them. The bridge between our cultures was a shared love of poetry and beautiful language. As for China? China was the great love of my life. Part of this Kindle edition is a Youtube video of the slides that awakened the stories. REVIEW FROM AMAZON INDIA: 5.0 out of 5 stars"Big Brother was our friend"
2 September 2019
Format: Kindle EditionVerified Purchase
A very interesting memoir of a foreign teacher of English in China in the early '80s, just as China was opening up. I find it especially interesting because of the close parallels between India and China. The stories of culture shock, and the friendships that can start when you go beyond it, lift this book beyond most personal memoirs. It is interesting how some of the book still trmains accurate about 21st century China.
Read more
Other Formats: Paperback 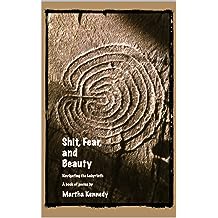 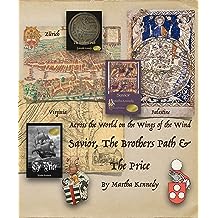 The first book is Savior. It is set during the 13th century. It tells the story of Rudolf von Lunkhofen going on Crusade in 1244 in search of salvation. The second, The Brothers Path, relates the experiences of the Schneebeli family during the Protestant Reformation. The third novel, The Price, follows the family across the Atlantic in 1843 and explores the harrowing decisions they faced. 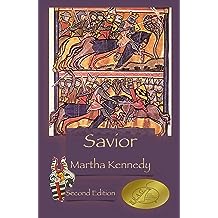 Savior: Second Edition (Across the World on the Wings of the Wind Book 1) Jul 15, 2016
by Martha Kennedy
( 9 )
$5.00
There’s nothing new about holy war. The language of the Crusades is echoed in the news of today. You can hear it in Savior, a work of historical fiction that looks both at holy war and depression through the mirror of the 13th century. *** Imagine living in a world where depression is not regarded as a disease, but as Satan trying to steal your soul. Imagine turning to your priest who counsels you to take the Cross and to travel thousands of miles to the Holy Land to kill people so that you can be free of Satan forever. Imagine you believe this so absolutely that none of the rational arguments offered by your parents, your friends or your beloved can persuade you otherwise. Imagine that this journey costs you everything but the one thing you had hoped to lose — your life. What, from that desperate emptiness, would you find to bring back? Savior is this story.
***
Savior is a coming-of-age novel, set in thirteenth century Switzerland, Palestine and Lebanon. Savior exemplifies the universal human journey of delusion, suffering, discovery, liberation, and transcendence that creates the individual.

Savior is the first book in a trilogy of stand-alone novels -- Across the World on the Wings of the Wind -- a family saga, spanning 500 years of the von Lunkhofen/Schneebeli family from Affoltern am Albis, Switzerland. The trilogy begins with Savior, relating Rudolf von Lunkhofen's journey on Crusade to the Holy Land in 1244 and ends with The Price that brings the Schneebeli family to America in 1743. In between is The Brothers Path in which the Schneebeli family finds itself caught up in the upheaval of the Protestant Reformation
Read more
Other Formats: Paperback 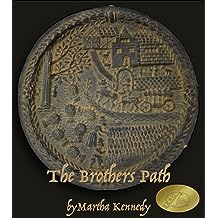 The Brothers Path (Across the World on the Wings of the Wind Book 2) Jun 29, 2016
by Martha Kennedy
( 11 )
$4.50
The world-shattering tumult of the Protestant Reformation enters the Schneebeli household when Rudolf Schneebeli is born two months early and dies a few minutes later without being baptized.

Named for the well-trodden track linking the Schneebeli farmhouse to the old Lunkhofen castle, The Brothers Path is set in a Swiss village near Zürich, between 1524 and 1531. It chronicles the lives of the six Schneebeli brothers, Heinrich, Hannes, Peter, Conrad, Thomann and Andreas. Each brother navigates his own path through, around or directly into the deadly drama of the Protestant reformation.

Two hundred years after the events recounted in The Brothers’ Path, thousands of immigrants, mostly Mennonites and Amish, left Switzerland for America looking for safety and freedom they could not find at home. If the novel teaches a “lesson” it would be a reminder why immigrants to America were adamant about separating church and state.

The Brothers Path is the second novel in the series Across the World on the Wings of the Wind is a trilogy of stand-alone novels, a family saga, spanning 500 years of the von Lunkhofen/Scneebeli family from Affoltern am Albis, Switzerland. The trilogy begins with Savior, relating Rudolf von Lunkhofen's journey on Crusade to the Holy Land in 1244 and ends with The Price that brings the Schneebeli family to America in 1743. In between is The Brothers Path in which the Schneebeli family finds itself caught up in the upheaval of the Protestant Reformation.
Read more
Other Formats: Paperback 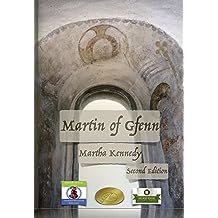 Martin of Gfenn Oct 18, 2014
by Martha Kennedy
( 13 )
$5.00
Martin of Gfenn is a historical novel, the story of a young artist living in Zurich in the mid-thirteenth century. When he is nineteen, Martin contracts leprosy. He fights physical deterioration and social stigma to do what he believes he was meant to do – paint fresco. His short journey takes him from the streets of a then-new Zurich to a small enclave of the Knights of Saint Lazarus, north of the Zurichberg in the village of Gfenn. It is there Martin fulfills his destiny.
Read more
Other Formats: Paperback 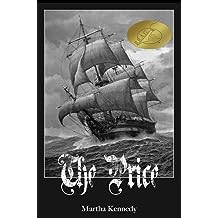 The Price (Across the World on the Wings of the Wind Book 3) Dec 5, 2018
by Martha Kennedy
( 4 )
$5.00
Hans Kaspar Schneebeli is enthralled by William Penn’s words describing an Eden where there is land for all, and everyone is free to worship as they please. Verena Dups, his long-time love, is happy living on her father’s horse farm in Affoltern-am-Albis near Zürich, Switzerland.

It seems nothing can heal the rift when Hans Kaspar insists he wants to go to America, and Verena adamantly refuses.

The death of his father, the casual words of a customer, and the plans of his own teenaged sons bring Hans Kaspar to a crisis. His dream of America returns. This time Verena sees that nothing can stop him or her sons. To keep the family together, Verena and her little girls must go, too, even though the voyage is dangerous, and there’s no turning back. The journey across the Atlantic changes all their lives, costing far more than the price of passage.

The Price is a love story, a historical novel about a Mennonite family’s emigration from Switzerland to Pennsylvania in the mid-eighteenth century, a powerful rendering of what happened over and over in families that immigrated to America. It is the third book in the series, Across the World on the Wings of the Wind, a trilogy about the Lunkhofen/Schneebeli family.

The first book is Savior — it tells the story of two brothers, Rudolf and Conrad von Lunkhofen who go on Crusade in 1244. The second book is The Brothers Path– it looks at the experiences of the six Schneebeli brothers when the Protestant Reformation hits their village and their lives. The Price brings the family to America in 1743.
Read more
Other Formats: Paperback