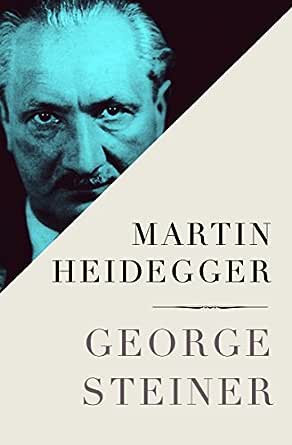 “It would be hard to imagine a better introduction to the work of philosopher Martin Heidegger.” —The New Republic

Acquaintance with the work of Martin Heidegger is indispensable to an understanding of contemporary thought and culture. His work has had a profound influence on a number of disciplines, including theology, Sartrean existentialism, linguistics, Hellenic studies, the structuralist and hermeneutic schools of textual interpretation, literary theory, and literature itself. --This text refers to an out of print or unavailable edition of this title.
Read more

Richard B. SchwartzTop Contributor: Philosophy
TOP 500 REVIEWERVINE VOICE
5.0 out of 5 stars One Of Steiner's Finest Books
Reviewed in the United States on March 14, 2018
Verified Purchase
This book first appeared in 1978 in a series edited by Frank Kermode. It was later reissued by the University of Chicago Press with the prefatory essay “Heidegger: In 1991,” a reprint of an essay published by Steiner in 1989 (“Heidegger, Again”). The book is an introduction to Heidegger’s thought which is constrained by the fact that the some 60 volumes of Heidegger’s oeuvre had not yet appeared in print. Nevertheless, Steiner explores a multiplicity of texts that appeared before and after SEIN UND ZEIT, though the latter deserves and receives the bulk of his commentary.

Steiner begins by posing the fundamental question: is Heidegger one of the west’s great philosophers, fit to be placed among such names as Plato and Kant or is he an obscurantist dealing in smoke and mirrors? (Steiner notes, e.g., that Bertrand Russell’s history of philosophy does not even mention him.) Steiner finally argues that he is one of the west’s great philosophers, if only because of his influence on the existentialists, the French Nietzscheans, modern literary criticism, modern psychoanalysis, and so on. Steiner acknowledges the obscurantist side of Heidegger and the fact that he may be ultimately forced to deal in tautologies. At the same time he recognizes the boldness of Heidegger’s labors and the depth of his thought.

He does not avoid the question of Heidegger’s carrying water for the National Socialists and is even more troubled by his post-1945 silence concerning the holocaust. He judges Heidegger to be a great philosopher but a small man, preeminently in his apparent cowardice with regard to the holocaust and the Nazis but also in his exhibition of what Steiner calls his academic ‘cunning’.

Steiner is probably the individual best positioned to write this book. While he is not an ontologist per se he is enough of a polymath to deal with the linguistic, rhetorical, philosophical and historical problems posed by Heidegger’s thought and experience. The book is not just as lucid as the subject allows. It goes beyond that standard and presents Heidegger’s thought in a way that interested layreaders (as opposed to professional philosophers) can follow with relative ease. The fact that he begins with Heidegger’s terminology and explores it at length helps a great deal. The fact that he can operate fluently in German, French and English along with the fact that he knows the pre-Socratics and the contemporary expressionist poets who profoundly influenced Heidegger facilitates and enriches his analysis.

Steiner is incapable of writing a dull book and he is capable of writing books—across a spectrum of subject matter—that leave his readers with that sense of awe that Heidegger felt we should have with regard to Being itself. He is, quite simply, an international treasure. Senior colleagues of mine who encountered him, decades ago, at the University of Chicago, knew, at the outset, that he was a person apart. This is the sort of book which tests Steiner’s depth and range and he is fully equal to the task.

M
5.0 out of 5 stars Who's Afraid of Heidegger?
Reviewed in the United States on January 24, 2010
Verified Purchase
To read George Steiner is to bask in the presence of a great intellectual mind at work. The popular French frauds so à la mode today seem determined to instill nothing more than doubt, but I have always believed that clarity of thought (which does not preclude doubt) is what makes a critical text like Steiner's monograph on Heidegger valuable. Derrida merely muddies the water (as Nietzsche would say), but Steiner puts you in touch with one of the most obscure, difficult, and significant philosophers of the 20th century.

This is a short book, but it is slow reading. Not because of jargon-riddled wordplay, but because Steiner takes the time to untangle Heidegger's neologisms and strange, poetic language. Indeed, the first half of the book is titled "Basic Terms," an understanding of which will enable the reader to follow what Heidegger is trying to say about existence, authentic being, etc.. Steiner puts Heidegger's works into historical context and explains his methodology. To wit, Heidegger truly believes that we are spoken through language, so his philosophizing takes the form of etymologizing, going back to the origins of words, and recovering what can help us to think Being. According to Steiner, we never do get to defining Being, but the journey is rich and the effort is worthwhile.

Heidegger wants to overcome Western Metaphysics, which has been determined by Plato (who privileges the noumenal realm of ideas over the phenomenal world we live in) and Aristotle (who objectifies the natural, phenomenal world by subjecting it to study). Both strategies have left us without the ability to listen to or open ourselves up to Being, to standing in awe before its mystery.

Steiner also elucidates Heidegger's notion of authenticity (accepting that we are beings-toward-death), and his belief that anxiety, guilt, and care are inherent to authentic being. Why is this? Because we are both beings-in-the-world and beings-in-time. Death, for Heidegger, "is not an event; it is a phenomenon to be understood existentially," a process, part of our becoming. There is something extremely liberating in this notion, and both Heidegger and Steiner are aware of it. Angst, or existential anxiety, is not something to be eliminated with facile religious beliefs, counseling, or psycho-pharmaceuticals; it is to be understood as the mark, the indication of a being striving to live authentically, embracing fate (that which has been sent to a being-in-the-world).

Because we are beings-in-the-world we must also be beings that care: care about what others think of us; care about our world; and care for others. Steiner develops this idea as it is revealed in Heideggers' works, and he also addresses the issue of his involvement with Nazism. How does one reconcile caring, commitment, and concentration camps?

Recognizing that we are still too close to the Holocaust to be dispassionate, Steiner nonetheless attempts to understand this facet of Heidegger's life. Steiner is neither persecutorial nor apologetic. And he is much more disturbed by what was not said than by what was. Why, he asks repeatedly, was Heidegger silent about Europe's "season in Hell" after the war? Steiner has a difficult time getting past this, but does not belabor the issue. Heidegger's works are indeed part of the spirit of the times, the zeitgeist, and have certain affinities with Nazi ideology. But Steiner is unable to conclude that Heidegger was an anti-Semite; there does not seem to be enough convincing evidence for that. But still, why the silence?

All in all, Steiner's book is the best introduction to this influential thinker. My field is Comparative Literature, not Philosophy, and I feel as though I learned a tremendous amount by reading this book. If you only read one introduction to Heidegger, this monograph should be it.
Read more
33 people found this helpful
Helpful
Report abuse

Nikolaos Moropoulos
5.0 out of 5 stars Steiner introduces you in the best possible way to Heidegger
Reviewed in the United States on July 12, 2010
Verified Purchase
I highly recommend this book to anyone who wants to be introduced to the work of Martin Heidegger.
It is eloquently written, has clarity in its expression, and is approachable by the reader who has not read philosophy systematically.
In addition, Steiner addresses in a remarkable way Heidegger's relationship with Nazism, and his "silence" after the Second World War.
Overall, it is not an easy read, but the best way to get introduced to Heidegger's work.
Read more
6 people found this helpful
Helpful
Report abuse

S. Meimaris
5.0 out of 5 stars Great book from a totally reliable seller
Reviewed in the United States on December 30, 2013
Verified Purchase
Thanks for your excellent service. The book was in great shape. I will treasure it. Price was great too. I am absolutely satisfied.
Read more
One person found this helpful
Helpful
Report abuse