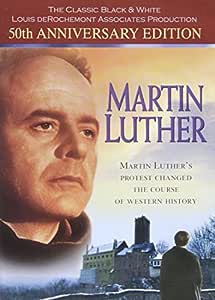 Carell, Annette (Actor), Gauge, Alexander (Actor) Rated:
NR
Format: DVD
4.3 out of 5 stars 188 ratings
See More
Save an extra $0.25 when you choose FREE No-Rush Shipping at checkout
Available at a lower price from other sellers that may not offer free Prime shipping.

The dramatic black and white classic film of Martin Luther's life made in the 1950's. This film was originally released in theaters worldwide and nominated for an Academy Award. A magnificent depiction of Luther and the forces at work in the surrounding society that resulted in his historic reforming efforts. This film traces Luther's life from a guilt-burdened monk to his eventual break with the Roman Church. This film, in spite of its age, continues to be a popular resource to introduce Luther's life.

4.3 out of 5 stars
4.3 out of 5
188 customer ratings
How does Amazon calculate star ratings?
Amazon calculates a product’s star ratings based on a machine learned model instead of a raw data average. The model takes into account factors including the age of a rating, whether the ratings are from verified purchasers, and factors that establish reviewer trustworthiness.

ERIC RACHUT M.D.
5.0 out of 5 stars Censored yet today.
Reviewed in the United States on July 19, 2018
Verified Purchase
Quite factual - as the picture announces at the beginning - and, with a chiefly British (or Anglo-Irish) cast of seasoned theatrical performers, well acted. The movie has the unusual coincidence of being nominated for two Academy Awards (cinematography, black and white; art/set design) and at the same time banned or censored in numerous locations in the US and Canada! If you investigate the Wikipedia entry for the movie, you will find that the film still irks its critics, to the point where analysis for historical error is performed with a microscope.
The Luther depicted here may be a little softened, as befits the 1950's; the real Luther was more rough-hewn and even, at times, scatological (although not to the degree of, say, an unexpurgated Sir Thomas More, who also extended the practice to the sexual realm). The physical risk to Luther (and his wife), while briefly mentioned, also may not receive all the attention it deserves. Both were effectively under a sentence of death had they gone to unsympathetic regions of the empire.
An interesting side issue is that the director, Irving Pichel, was originally Jewish and a Communist, to the point where he was blacklisted (this may partially explain why this movie and the next one, a biography of Christ entitled Day of Triumph, were made in Europe and not the US, and may also provide one motivation for the usually nonChristian Hollywood moguls to give Martin Luther two Academy award nominations). At the time Mr Pichel made Martin Luther, he was a Christian socialist. Incidentally, he can be seen towards the end of the movie, where he introduces the representatives presenting the Augsburg Confession.
Finally, contrary to the mantra, this movie was not shown in church basements. Our family drove 100 miles to see it in a theater that would show it in 1953 and it was broadcast by local TV in Mason City, Iowa, regularly thereafter on Reformation Day. But in the 1950's and 1960's, churches did not have movie projectors. Now let's see if Turner, AMC, etc, will show it on cable.

1966 Alex Cat
5.0 out of 5 stars contrast to "Luther" 0f 1973
Reviewed in the United States on May 26, 2014
Verified Purchase
This work has much more scholarly objectivity due to narration throughout ; it provides much in historic content and a Luther character true to best historic guess than '73 movie leaves out in favor of character entertainment and feelings emoted by situation. Both should be seen to get a fuller understanding of issues, related suffering and value related to culture and history brought on by Luther events. The main gift to the viewer is understanding the scriptural gospel summarized so well by the beer drinkers of Wittenberg. " He did it for us ; he does it in us and He does it through us." ; " Behold the Lamb of God who has taken away the sin of the world." So Its too late for you to do anything for yourself ; its already been done! Welcome to the freedom of the Gospel -say goodbye to slavery to sin and hypocritical manipulations of some Christians and many of their church groups that center up on man instead of God.. Did you know Bowling and Christmas trees are credited to Luther? Some Christians tribute their "awakening" to one of these movies because they identify with Luther against the legalism or other man centered abuse or bad theology in their own life.
Read more
5 people found this helpful
Helpful
Comment Report abuse

Gary W. Phelps
5.0 out of 5 stars The 1950s Movie, Martin Luther, received 2 Academy Awards
Reviewed in the United States on February 20, 2020
Verified Purchase
When I was a boy during the 1950s, in the 6th Grade, it was my privilege to see this movie. It was marvelous to see the 50th Anniversary Edition available. I have seen other movies that portray Martin Luther as the person and the religious Doctor and leader of the Reformation. This movie is presented with objectivity and scholarship. The film presents Luther who sought to reform the Roman Catholic Church rather than a division. Luther's life is traced to accurately portray a guilt-ridden German Monk who prevailed in noteworthy episodes to lead the Reformation. Additional Features are added to this classic movie that enhance the facts and the history. It is a pleasure to have "Martin Luther" in my DVD collection and remains in a 5-Gold-Star rating!
Read more
Helpful
Comment Report abuse

Mark
5.0 out of 5 stars An Honest Portrayal
Reviewed in the United States on December 6, 2013
Verified Purchase
I remember I found this movie on VHS about 3 years ago. Back then I didn't know much about the Reformation and Martin Luther was a name I got confused with an African American civil rights leader. I watched the movie and it made a lasting impression on me. This movie is still the best adaptation of this historical reformer I have seen to date. I have watched the 2003 version with Joseph Fiennes and it also is a fine piece of work, but still prefer this old black and white version. Martin Luther is passionately played by Niall MacGinnis. This movie also proves you don't need all the fancy special effects to have a great movie to hold your attention.
After watching the movie a couple of times now, I can honestly say I think it does a fair job of presenting both sides of the issue (concerning Catholics and Protestants) fairly. For those who are looking for a deeper understanding into the life of Martin Luther, I would suggest the PBS documentary on him. It gives a better profile into what made the man "tick."

Neil Roger Chertcoff
4.0 out of 5 stars Reformation : Religion and Revolt in the 16th Cent.
Reviewed in the United States on March 27, 2015
Verified Purchase
Pretty Good . But i think it should have gone moreto the material and social reasons
for the German nobility, town merchants, and peoples disgust
with paying indulgincies to Rome. They felt it was just a TAX on them a way to
pluck money from the faithful for the interests primarily of the centre in
the Roman -Vatican led church.
But also society was growing anew into towns, small cities,
meerantilism and trade on goods , services was growing as these new Burghers, etc
felt THEy would not submit to to the autocratic Catholic imperial authority still hanging
over them That is the roots of the Reformation revolts themselves.
Martin Luther . very brave, was a key as politics then had to have a RELIGIOUS justification
to be heard out and accepted more widely! ,Luther was shown as eloquent in his knowledge of
Church doctrines, contradictions and hypocrisy .
Proof f this was how the struggle quickly spread as it had supporters n other European states.
Luther was lucky to have obtained the escort support of the princes at Worms for sure !

Dr Alan Clifford
5.0 out of 5 stars LONG LIVE LUTHER!
Reviewed in the United Kingdom on November 3, 2017
Verified Purchase
Despite the advances in cinema technology, this digitized version of the 1953 movie is splendid. It tells the story of Martin Luther with great clarity and conviction. Niall MacGinnis and other cast members portray the return to the authentic message of our Lord Jesus Christ with compelling integrity. The controversial theological issues involved are dealt with accurately and fairly. It is a 'must' for the current quincentenary celebration of the Protestant Reformation (1517-2017). In the face of ongoing ecumenical dilution and betrayal of the principles Luther and others contended for, this DVD serves as a much-needed and inspirational corrective.
Read more

Nim
5.0 out of 5 stars The ones are the best!
Reviewed in the United Kingdom on March 1, 2018
Verified Purchase
Great film. We enjoyed it very much, even though it's black and white.
Read more
Helpful
Sending feedback...
Thank you for your feedback.
Sorry, we failed to record your vote. Please try again
Report abuse

andy mac
5.0 out of 5 stars Martin Luther DVD
Reviewed in the United Kingdom on August 26, 2012
Verified Purchase
This is an excellent film, It helps us understand how our religion developed from the early state of roman catholicism and led to the bible being printed in a Language that people can understand. The service amazon provided in getting this DVD to me was excellent ,
Read more
5 people found this helpful
Helpful
Sending feedback...
Thank you for your feedback.
Sorry, we failed to record your vote. Please try again
Report abuse

Mrs. S. Adams
5.0 out of 5 stars A Life which changed the world
Reviewed in the United Kingdom on March 23, 2013
Verified Purchase
Great movie and in some ways better than the more recent version. Well pleased indeed with the movie and service
Read more
One person found this helpful
Helpful
Sending feedback...
Thank you for your feedback.
Sorry, we failed to record your vote. Please try again
Report abuse
Load more international reviews

Page 1 of 1 Start overPage 1 of 1
This shopping feature will continue to load items when the Enter key is pressed. In order to navigate out of this carousel please use your heading shortcut key to navigate to the next or previous heading.
Back
Next
Pages with related products. See and discover other items: german language movies, Explore projectors for churches