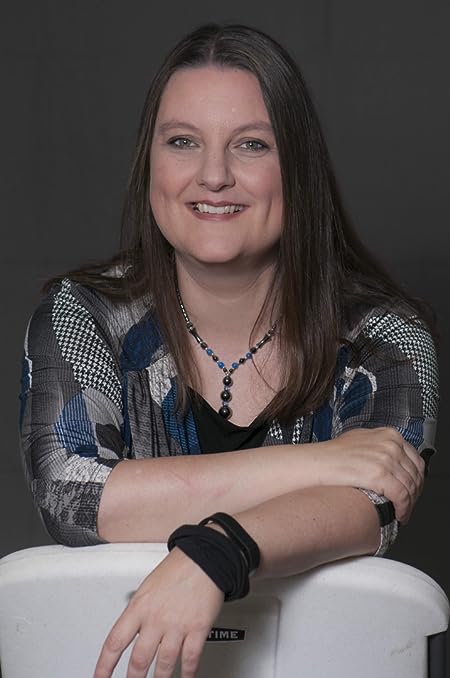 Martine Lewis is a forty something who was born and raised in the French speaking province of Quebec, Canada. She spent her childhood looking forward to her summer vacations at the farm, which were a nice escape from the suburbs where she lived.

Her first written endeavor was a 200-page handwritten Duran Duran bandfiction which she wrote when she was eleven years old. Of all her written work, this is the only one she no longer has.

All throughout high school, Martine wrote more bandfictions and some original work, then she went to write fanfictions in the Star Wars, Buffy and Harry Potter universes. Her fanficiton in the Potterverse are mostly centered on characters of her own creation and can be found on fanfiction.net.

Following her viewing of Roswell on Netflix in 2012, Martine wrote book two and three of the Gray Eyes Series, then went on to create the Gray Eyes Series universe in which she has been playing ever since. She writes contemporary coming-of-age romance fiction (young adult/new adult) with a twist.

Martine is an avid reader and rollerskater. She loves sushi, hot chocolate on a cold day, and the beach. But what she loves above all else is to curl on her chair with her computer and write more stories for her readers.

Martine currently lives in Houston TX with her two cats. 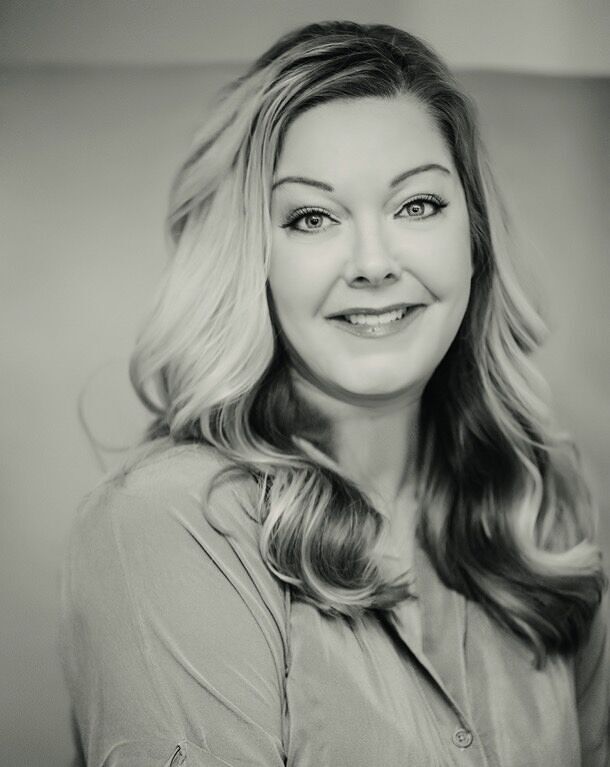 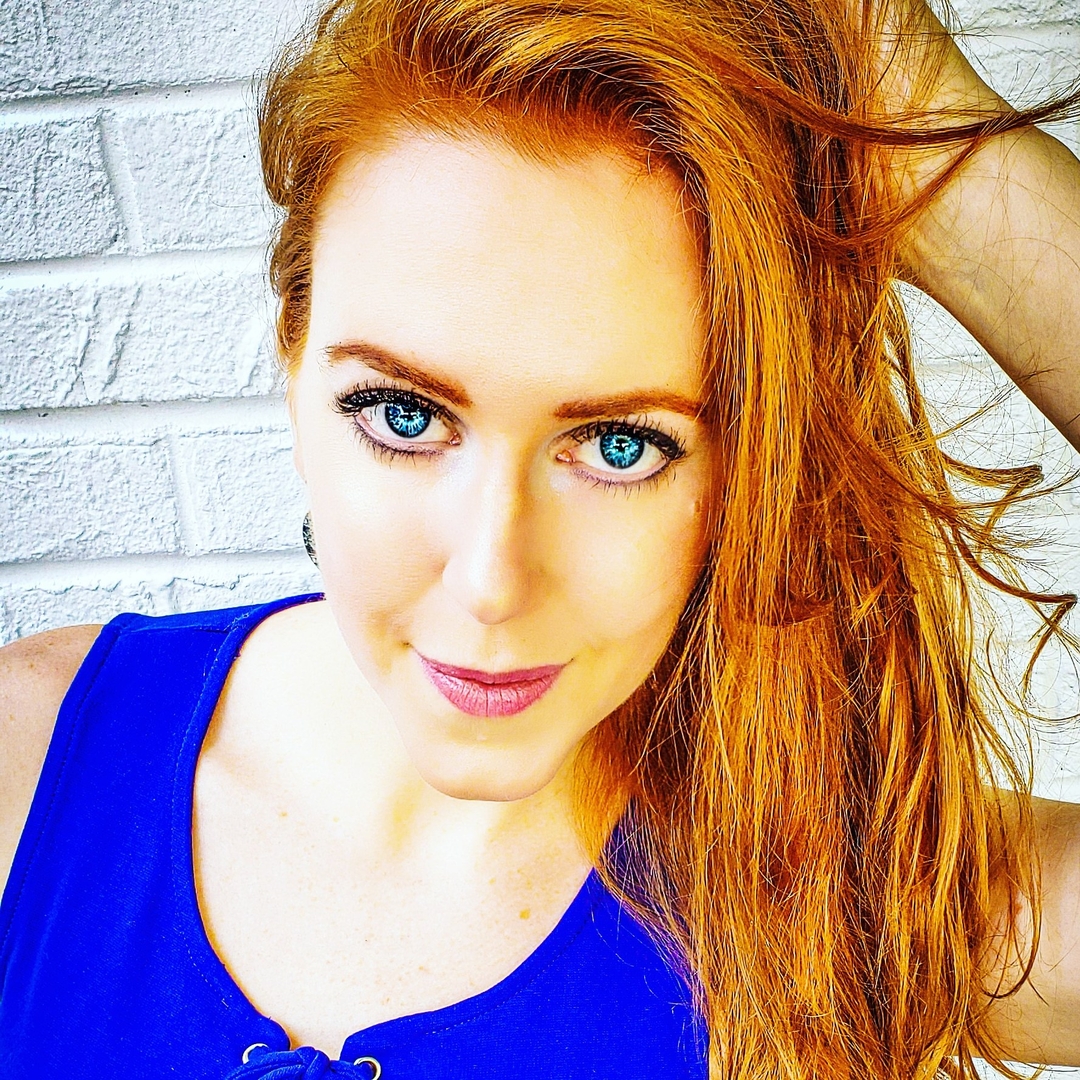 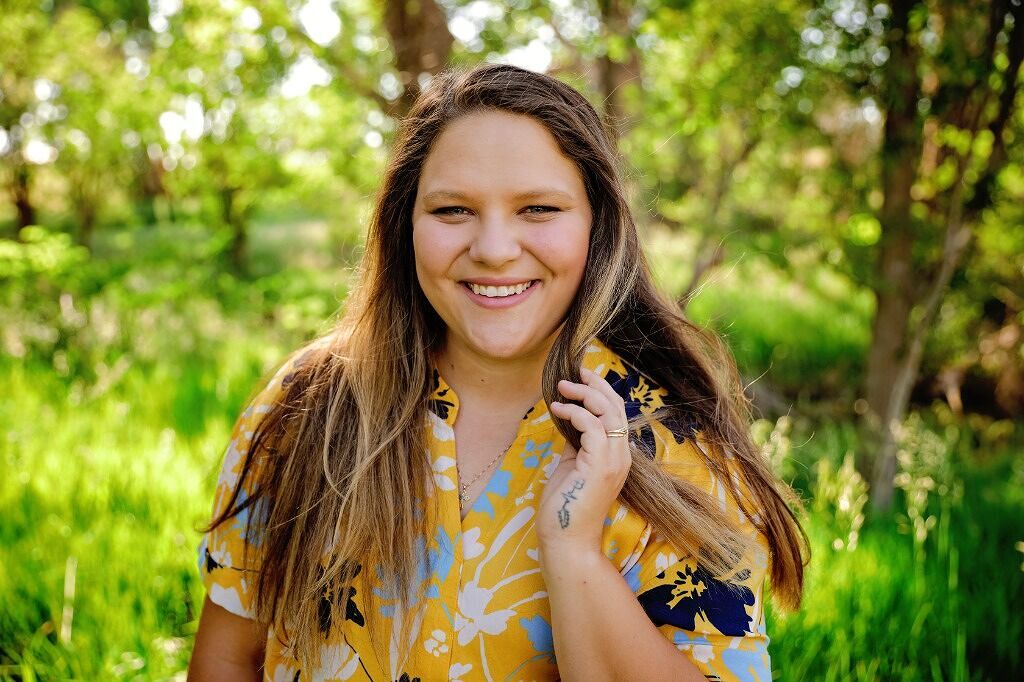 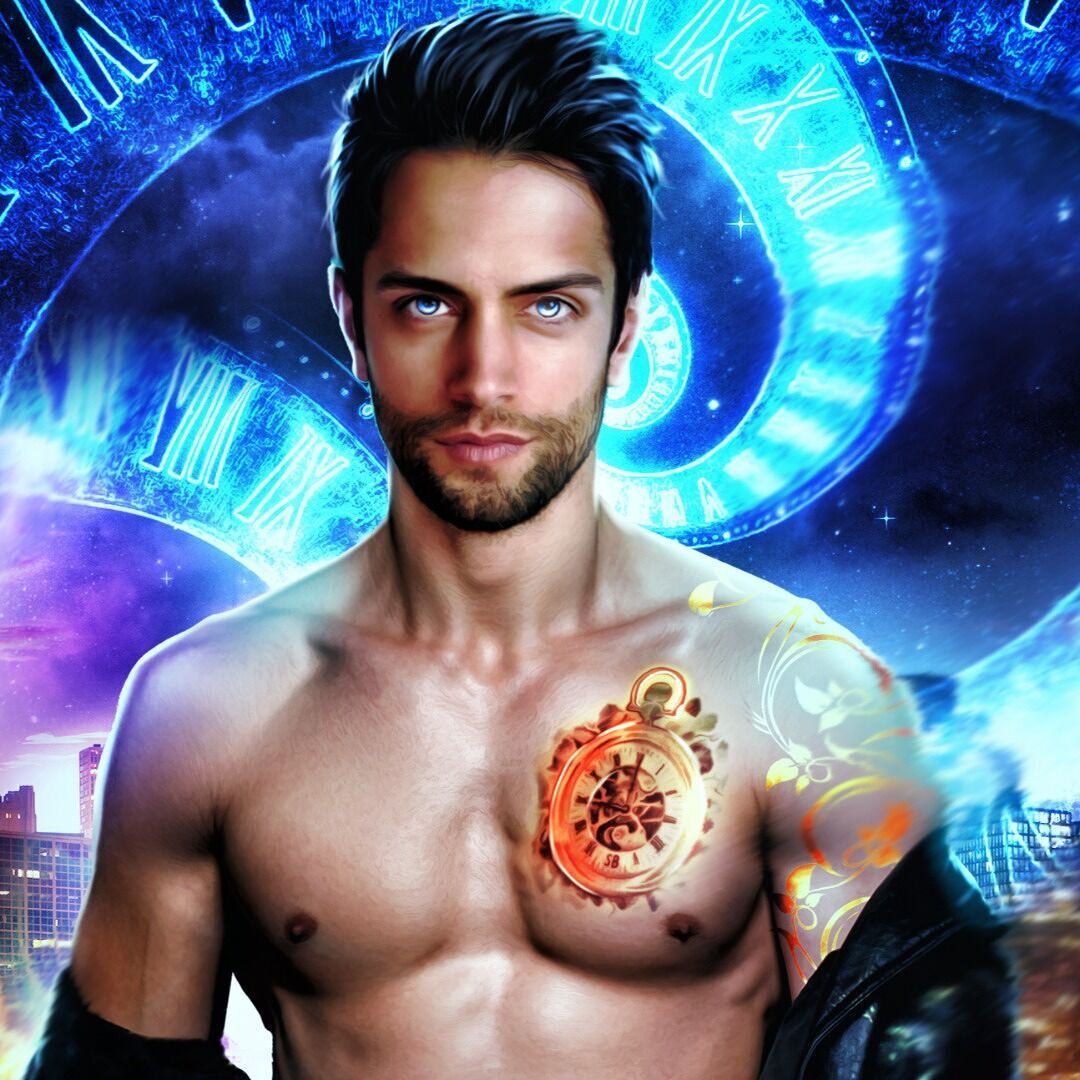 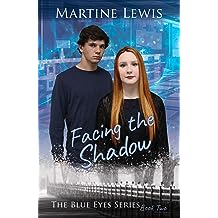 Facing the Shadow (The Blue Eyes Series Book 2) Mar 7, 2020
by Martine Lewis
( 1 )
$3.99
A girl afraid to live
A boy thrown into a world he would rather forget
A tangled web of love and deception

Empath and socialite Sara Wilson has it all: money, glamour, beauty. But when her younger brother disappears, she realizes she cannot reach out to the people she knows for help. She approaches Fisher P.I., a company her people stay far away from, a company owned by the enemy. When she meets with an intriguing but handsome blue-eyes man, she realizes there is more to him than what she had been taught.

Empath and company owner Martin Belkin is happy living a simple life. But when he is recruited to help find Sara’s brother, he is forced into a world of intrigue that requires him to use his powers again.

As threats mount, and the odds stack against them, Sara and Martin’s attraction for each other grows into a raging blaze that cannot be ignored. Can they survive the dangers around them and find their way away from the darkness?
Read more
Other Formats: Paperback 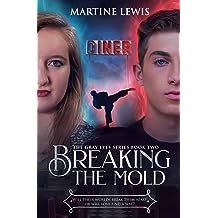 When empath and high school senior Alex Parker moves back to his small hometown in Texas after ten years away, he only wants one thing: Olivia Kendall, the girl he knew in second grade, the girl who never made fun of him and saved him from the bullies.

But is she still in town?
Will she be at school?
Did she remain the sweet girl he remembered?

Olivia looks forward to her senior year. But her world is shaken when a new boy walks into school, a boy her heart recognizes somehow. When Olivia decides to be her own person and go after what she wants, she discovers that not everybody is on board with her plans. Her father’s idea of how she should run her life doesn’t include Alex.

Will the two stay together despite a town that conspires against them?
Will Alex’s secret tear them apart?
Read more
Other Formats: Paperback 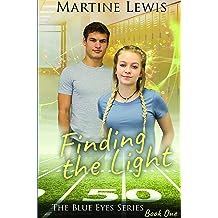 All empath Lana Volkov wants is to finish her senior year of high school without drama. After her family fled Belarus four years prior to avoid discovery, she was forced to give up her dreams of attending a music conservatory, but she refuses to stop playing the clarinet and joins the school band. When fate intervenes, and she's required to partner with the star quarterback, she realizes there is more to life than just making it through.

Tristan Samson loves playing football, but since his parents' divorce, he had to spend more time caring for his brother than doing anything for himself. His attraction to Lana finally pushes him to ask her out, and the spark between them ignites into a blaze neither can ignore.

But something sinister lurks in the shadows, something intent on destroying the young couple and their happiness. Can they survive the obstacles put in front of them and find their way to the light?
Read more
Other Formats: Paperback 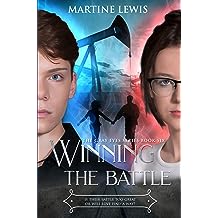 Winning the Battle (The Gray Eyes Series Book 6) Sep 1, 2018
by Martine Lewis
( 4 )
$3.99
A small town girl with big dreams.
The only thing empath and high school dropout Betty Scuttler has ever known is her small town of Jal, New Mexico. When a mysterious boy drives into town, he makes her want things she had always dreamed of but didn't think she could have.
A big city boy with small aspirations.
When his grandmother knocks on the door of his Manhattan condo, empath and private investigator Kyle Fisher wishes he hadn't answered. He is recruited to find the sixth gray eyes empath, the missing one. Little does he know that he is not the only one searching.
Will Betty and Kyle let their inner and external battles get in their way?
Or will they let love find a way?
Read more
Other Formats: Paperback 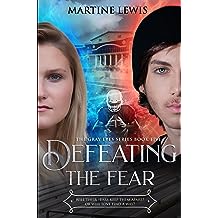 Defeating the Fear (The Gray Eyes Series Book 5) Mar 20, 2018
by Martine Lewis
( 3 )
$3.99
Haunted by the knowledge that his parents have always preferred his twin siblings over him, empath and quarterback Lex Lexington does not believe he is worthy of love. But when he sees Abby cheerleading on the sideline, something in her calls to his heart like nothing else before.

Hoping she has finally run far enough from a mistake that still haunts her, Abby Miller lands in Houston. When she meets Lex, something awakens inside of her, and she dares to hope she had a future after all, a future without fear where she can be her true self.

Can the two overcome their inner battles and their fear to be together? Or will their painful pasts keep them apart? 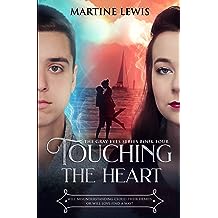 Touching the Heart (The Gray Eyes Series Book 4) Sep 19, 2017
by Martine Lewis
( 2 )
$3.99
A boy with an extraordinary intellect, afraid of losing his mind.
Jeremiah Dalton lives and breathes science. His perfect world is shattered when an honest mistake lands him in a psychology program in Sarasota, Florida. Away from everything that has ever brought him comfort and with a mom suffering from schizophrenia, can Jeremiah survive and strive while fulfilling the needs for love and friendship he didn’t know he had?

A girl with a gift, afraid to be alone.
After Elle Parker’s mother moves yet again to another town, Elle, who can feel other people’s emotions, enlists her father’s help to remain in her Sarasota beach paradise. As a condition of his support, her dad requires Elle to get help with her schoolwork. When she meets her new tutor, Jeremiah, for the first time, the connection is undeniable. But Jeremiah is nothing like the in-crowd she hangs out with.

Can the two overcome life’s adversities and their own insecurities to make their relationship work? 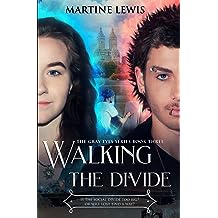 Empath and street kid Zander Fredrick has fend for himself for as long as he could remember, his only support a nun from the youth center. While painting in Central Park one day, he comes across a girl who calls to his soul, a girl who holds the promise of home and happiness.

Who is she?
Will he ever see her again?

Wealthy Manhattan upper class high school senior Elyssa Thompson wants something more from life, something meaningful beyond the drunken rich kid parties and shallow talks of clothes and makeup. A chance encounter with a boy at the youth center where she volunteers makes her yarn for something she has never had before: love.

Who is he?
Will she ever build the courage to talk to him?

Will Zander and Elyssa cross the social class divide to be together? 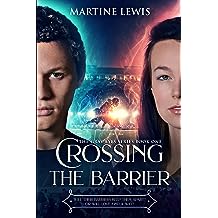 Especially for empath and band geek Lily Morgan. The only way she manages to survive with her sanity intact is by shielding from the emotions of people around her. But when Malakai Thomas, the star wide receiver and her secret crush, barrels into her in the hallway, she suddenly loses what makes high school bearable, sending her already complicated life into a tailspin.

Ever since he saw her across the hallway in freshman year, Malakai has had eyes for only one girl: Lily. Inadvertently tackling her to the ground while running inside of school was not how he thought their first meeting would go. Now, he can’t get Lily out of his head. Something draws him in, something that gives him no other option than to pursue her.

But can they cross the social barriers of high school to be together?

If you enjoy young love with a touch of the supernatural, you won't want to miss this!