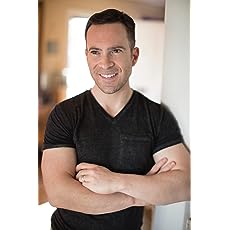 Marty Beckerman is the author of #1 Amazon.com bestselling parody THE HEMING WAY (St. Martin's Press), which USA Today called "laugh-out-loud," and most recently the 2018 novella KILLENNIALS. Business Insider calls him "the most famous author" from Alaska. A former editor at Esquire and MTV News, Beckerman has also written for the New York Times, the Atlantic, Wired, Playboy, Discover, Maxim, CBS Interactive, Mental Floss, the Daily Beast, and other leading publications. He lives in Los Angeles with his wife and their cat and Netflix.
Read more 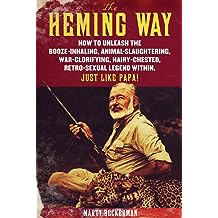 The Heming Way: How to Unleash the Booze-Inhaling, Animal-Slaughtering, War-Glorifying, Hairy-Chested Retro-Sexual Legend Within, Just Like Papa! Nov 27, 2012
by Marty Beckerman
( 24 )
$7.99

Marty Beckerman's hilarious guide for the modern man to booze, battle, and bull-fight his way to becoming more like Hemingway

More than fifty years have passed since the death of Ernest Hemingway, history's ultimate man, and young males today—obsessed with Facebook, Twitter, and Playstation—know nothing about his legendary brand of rugged, alcoholic masculinity. They cannot skin a fish, dominate a battlefield, or transform majestic creatures of the Southern Hemisphere into piano keyboards.

Advice includes:
How to kill enough animals to render a species endangered—just like Papa!
Getting your friends to think drinking a daiquiri is manly . . . just by drinking one nine yourself
Achieving sufficiently high testosterone levels to never have to worry about the chance of having a daughter instead of a son
And much more!

Profane, insightful, hilarious and loaded with more than 150 photos, facts and insights about Papa, The Heming Way is a difficult path, and not for the weak, but truth is manlier than fiction. 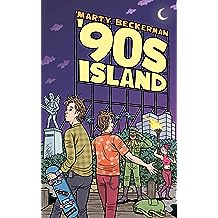 '90s Island May 9, 2013
by Marty Beckerman
( 16 )
$1.99
On the eve of their thirtieth birthday, twin brothers Jake and Zack Hind—bankrupt from the recession and obsessed with the lost golden era of the 1990s—drunkenly create a Kickstarter crowdfunding page for ’90s ISLAND, a tropical commune dedicated to recreating that beloved, carefree decade. When they wake up, Generation Y has collectively pledged millions of dollars.

At first it’s a thrilling return to the twentieth century: ’90s fashions, ’90s music, ’90s slang, ’90s video games, even ’90s junk food…but the fun turns to horror when Zack seizes dictatorial power, banning everything from modern books to medicine. Jake must stop his brother—but first he must conquer his own nostalgia. 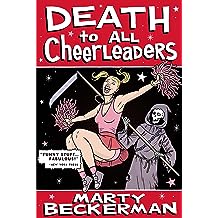 Death to All Cheerleaders: The Early Works of the Greatest Writer of His or Any Other Generation Dec 18, 2015
by Marty Beckerman
( 2 )
$2.99
Before he was a #1 Amazon.com bestselling humorist and a contributor to The New York Times, Esquire, Playboy, and MTV News, Marty Beckerman (“laugh-out-loud”—USA Today) was a sarcastic teenager from tropical Anchorage, Alaska, who had a column in the local newspaper and zero f***s to give. Week after week, he skewered high school rites of passage, decried adolescent superficiality, and chronicled his own hopeless attempts to get a date. In 2000, at age 17, Beckerman collected his cynical tirades into a book that went Web 1.0 viral, shipped 1,000 copies from his parents’ basement, and launched his career as a professional writer who sometimes even puts on pants before noon.

Fifteen years later, this expanded and revised edition—with 20,000 words of bonus content from 1998-2001—showcases the comedic origins of “the most famous author from Alaska,” according to Business Insider. (For the record, Beckerman—now a semi-mature adult man—no longer has a problem with cheerleaders, and even admits they’re probably okay people. We all lose our ideals eventually.)

“[A] hilarious gash against hypocrisy . . .” —PopMatters

“His articles show the evils in this world as he sees them, and take us through the typical teenage rites of passage. . . . His talent, wit, and confrontational nature promise him a bright future.” —The Mitzpeh (University of Maryland)

“Once the initial shock of Beckerman’s profanity and hatred wears off, there are some highly readable and humorous gags. . . . Frequently hilarious.” —The Anchorage Daily News

“Beckerman is able to have you rolling on the floor in a convulsive fit of relentless laughter. . . . It is very well worth the cost. Don’t miss out on this one.” —Union Weekly (California State University, Long Beach)
Read more 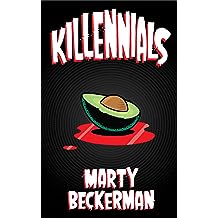 Killennials: A Novella Oct 22, 2018
by Marty Beckerman
( 7 )
$2.99
Adjunct professor Olivia has no savings, no stability, no hope...oh, and she's still living at home with her father, the university dean. Meanwhile, sky-high tuition is wrecking her students' lives. The solution? Kidnap the out-of-touch baby boomers running the school and demand cancellation of all college loan debt. What could possibly go wrong, except for a civil war between young and old?

Adjusted for inflation, millennials spend 50% more on rent, 75% more on healthcare and 150% more on college—while earning $10,000 less—than baby boomers did at the same age. Two-thirds can't afford to buy a house or save for retirement. It was only a matter of time until s**t went down...

"It's a boisterous amalgamation of DOG DAY AFTERNOON, BACK TO SCHOOL and LORD OF THE FLIES that somehow manages to be simultaneously hilarious, harrowing and informative. Beckerman skewers all, yes, but also reminds us that (almost) everyone’s sociopolitical quirks and rage have a legitimate root cause if we can bring ourselves to look for it."
—Rue Morgue

"[B]lood-soaked and thrilling… [A]n intelligent dialogue… Characters in the book come from all walks of life, and Beckerman brings a unique voice to each one, their strengths and weaknesses telling their own stories throughout the piece. 'Killennials' is recommended for adults and college-aged individuals alike, as it touches on relevant subjects for both generations in a format neither overwhelming nor dense."
—The Badger Herald, UW-Madison's Independent Student Newspaper

Praise for Other Books by the Author:

"Beckerman depicts sympathetic people who behave in hateful ways and, in doing so, manages to capture something essential about our generation."
—The Brown Daily Herald

"It is tempting to cut and paste huge blockquotes of Beckerman brilliantly skewering…but the choosing would be too difficult."
—Decibel magazine

"[Y]ou won’t be able to hold in your laughter..."
—Oregon Daily Emerald

"Beckerman carries the reader through with wit and intelligence, taking a shot at everything in his path."
—Beatdom

"[H]ilarious ... while at the same time sobering and disturbing."
—StarMetro Toronto

"Marty Beckerman [is] the Lenny Bruce of his generation."
—John Strausbaugh, author of Rock 'Til You Drop: The Decline from Rebellion to Nostalgia
Read more
Other Formats: Paperback 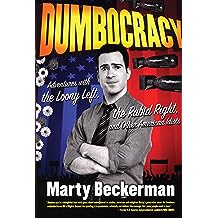 In every election year, we hear much about the all-powerful “bases” of each major party. Who are these activists? What drives them? And why are they all equally dangerous to our lives, liberties, and pursuits of happiness? In Dumbocracy, journalist Marty Beckerman spends four years with foot soldiers of the Left and Right—pro-choice and anti-choice, pro-gay rights and anti-gay rights, pro-war and anti-war—and delivers a searing, hilarious indictment of the True Believer mentality.

Whether it’s banning free speech to protect people’s feelings or banning adult entertainment to enforce morality, extremists have no use for our civil liberties. The ends justify the means for each side—such as brainwashing children and criminalizing dissent—because culture warriors have no other reason for living than victory. However, Beckerman is unafraid to expose their tactics—and their never-ending hypocrisies—with comical, over-the-top glee worthy of South Park or The Daily Show.

No extremist will escape unscathed, but moderate readers of all stripes will fall in love with Beckerman’s iconoclasm. In the tradition of P.J. O’Rourke’s Parliament of Whores and Michael Moore’s Stupid White Men, Beckerman’s grand political satire will have readers laughing on the floor and ripping the hair from their scalps. 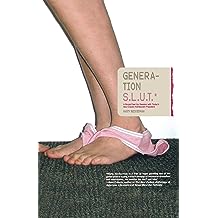 Generation S.L.U.T.: A Brutal Feel-up Session with Today's Sex-Crazed Adolescent Populace Feb 24, 2004
by Marty Beckerman
( 40 )
$12.99
The first exploration of the sex lives of modern teens, as reported from the frontlines by twenty-year-old Marty Beckerman.
Innovatively combining fact and fiction, the book is filled with mind-shattering stats, news reports, and confessions from adolescents nationwide about the new American "Hook-Up Culture," in which 7,700 kids lose their virginity every day.
Far from religious proselytizing, Generation S.L.U.T. seeks to find the balance between sexual freedom and sexual responsibility, and even the most cynical readers (not to mention parents) will find themselves speechless and heartbroken. Blunt and brutal, tackling everything from preteen oral sex to gun violence, sexual assault, and suicide, Beckerman's tour de force through contemporary adolescence will leave you stunned, breathless, and ultimately horrified.
Read more
Other Formats: Paperback