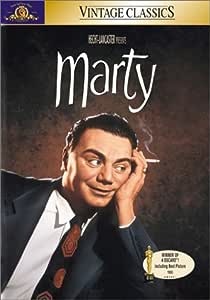 Share
STREAM ANYTIME with Prime Video from $13.99
Have one to sell?
Sell on Amazon

Americaand the worldfell in love with Marty, the first film to win* both the Best Picture OscarÂ(r) and the Cannes Film Festival's Golden Palm. Nominated** for a total of eight Academy AwardsÂ(r), this timeless classic is rich in laughs and tearsa masterpiece of warm-hearted storytelling (The Hollywood Reporter). I ve been looking for a girl every Saturday night of my life, says Marty Piletti (Ernest Borgnine). Yet, despite all his efforts, this 34-year-old Bronx butcher remains as shy and uncomfortable around women today as on the day he was born. So when he meets Clara (Betsy Blair), a lonely schoolteacher who's just as smitten with himas he is with her, Marty's on top of the world. But not everyone around him shares Marty's joy. Andwhen his friends and family continually find fault with Clara, even Marty begins to question his newfound love until he discovers, in an extraordinary way, the strength and courage to follow his heart. *1955 **1955: Best Picture (won), Actor (Borgnine, won), Director (won), Supporting Actor (Joe Mantell), Supporting Actress (Blair), Screenplay (won), B&W Cinematography, Art Direction/Set Decoration (B&W)

Originally broadcast as a 50-minute drama on Philco Television Playhouse in 1953, Marty ensured Paddy Chayefsky's status as one of the greatest writers of television's golden age. When Chayefsky, director Delbert Mann, and actor Ernest Borgnine reunited for this 90-minute film version, the play had been polished with extra scenes, further perfecting Chayefsky's timeless study of loneliness and heartbreak. And the film, in which Borgnine excels as the single, 35-year-old "fat and ugly" butcher Marty Pilletti, received well-deserved Oscars® for Best Picture, Director, Actor, and Screenplay. Although Chayefsky's central theme is the pain of being unwanted (as felt by Marty himself as well as his elderly Aunt Catherine, who's become a burden to her married daughter), the film is never somber or depressing, and achieves a rare quality of honesty, humor, and hopefulness without resorting to artifice or sentiment.

Marty's just about given up on love when he meets plain-looking Clara (Betsy Blair), a 29-year-old teacher who's endured similar cycles of rejection. Much of Marty explores the simple decency of these characters, their admirable qualities and mutual connection, and the slow escalation of self-esteem that will hold them together. Marty is a supremely compassionate film, but it's also an entertaining one, trimmed (like a good butcher's meat) of any dramatic fat. And although Blair (who earned an Oscar nomination) is superb in her role, it's worth noting that she's more conventionally "attractive" than Nancy Marchand (late of The Sopranos), who played Clara with arguably greater authenticity in the original 1953 telecast. --Jeff Shannon