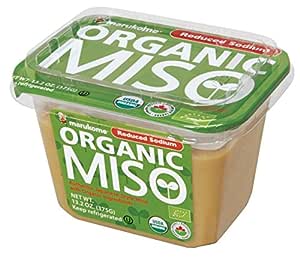 Miso's origins can be traced to China as far back as the 4th century BC. The written word Miso first appeared around 800 BC. In Japan, it is said that Miso was introduced in the 7th century by Buddhist monks. The process of making Miso was gradually refined and it became a vital part of the samurai diet. It was in the 17th century that industrial production of Miso first began. High in protein and rich in vitamins and minerals, Miso played an important nutritional role in feudal Japan. Miso is still widely used in Japan, both in traditional and modern cooking, but it has been gaining worldwide interest, as well. Marukome Co. manufactures approximately 100,000 tons of Miso annually, making it Japan's largest producer. Made from soybeans, rice, and salt, Miso is a fermented paste. It is brown in color and tastes pleasantly salty and tangy on its own. While the most common use of Miso is in Miso soup, Miso also adds a unique burst of flavor to salad dressings, sauces and marinades, baked tofu, vegetable dishes, and even dessert sorbets. Often called "soybean paste" by Westerners, Miso has played a vital role in the culinary life of Japan for hundreds of years. More and more, however, the salty taste and buttery texture of Miso is becoming popular in the West, as a favorite ingredient in a range of recipes. Miso is manufactured by mixing soybeans, rice koji and salt, and allowing them to ferment. The aging time, ranging from weeks to month, depends upon the specific type of Miso being produced. Once this process is complete, the aged miso is ground into a paste similar in texture to that of butter. The color, texture, and degree of saltiness of a particular Miso depends upon the ingredients used, and the duration of the aging period. Miso ranges in color from white to brown.

Page 1 of 1 Start overPage 1 of 1
This shopping feature will continue to load items when the Enter key is pressed. In order to navigate out of this carousel please use your heading shortcut key to navigate to the next or previous heading.
Back
Next
Pages with related products. See and discover other items: baked desserts, miso salad dressing, miso soup paste, miso soup, sauces and marinades, soybean sauce