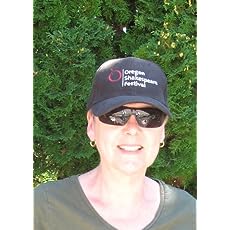 Marva Dasef is a writer living in the Pacific Northwest with her husband. Retired from thirty-five years in the software industry, she has now turned her energies to writing fiction and finds it a much more satisfying occupation.

Marva has published more than forty stories in a number of on-line and print magazines, with several included in Best of anthologies. She has several already published print and ebooks, and is now turning them into audio books. Seven audio books are currently available.

See a complete list of her published work at http://tinyurl.com/DasefAuthor/ and http://mgddasef.blogspot.com/
Read more 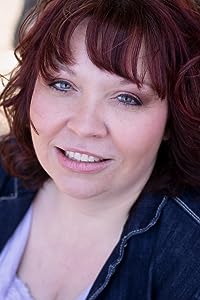 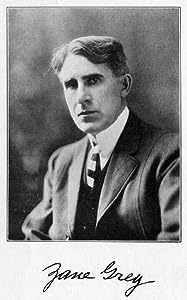 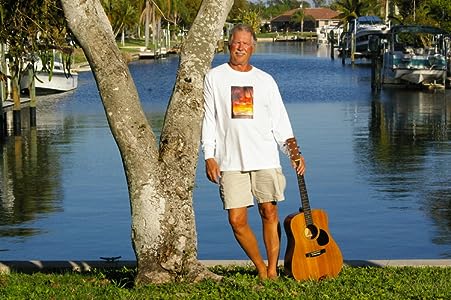 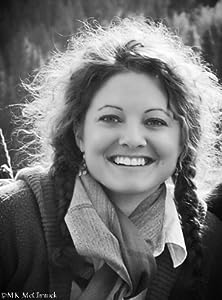 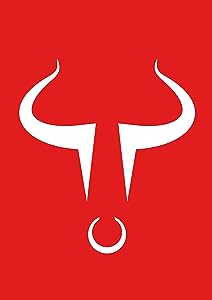 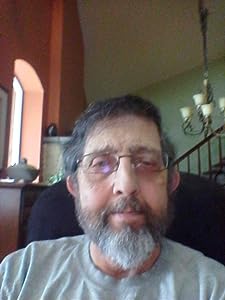 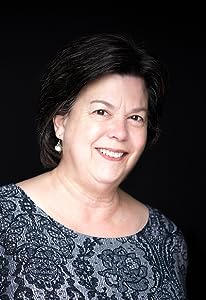 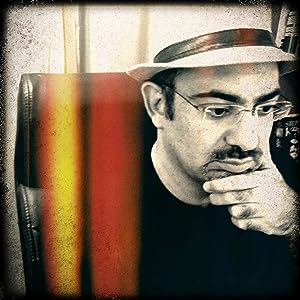 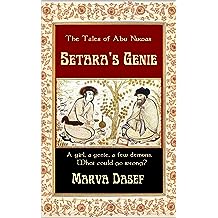 Abu Nuwas sits in the bazaar on his threadbare rug; a cup and sign proclaim him a teller of tales. For one small coin, he bids passers by to listen. A poor girl, Najda, sells spices from a tray. Would he, she asks, trade a tale for a packet of spice? Abu Nuwas agrees and begins the epic adventures of a girl and her genie.

As did Scheherazade before him, Abu leaves Najda hanging in the middle of each yarn to keep her coming back. Between stories, he questions the girl about her life. He discovers that she’s been promised in marriage to an old man whom she hates, but she must wed him to save her sick mother’s life. The rich bridegroom will pay for the doctors the mother needs. Meanwhile, Najda sells spices in the market to earn enough money to keep her mother alive.

He relates the adventures of Setara, the bored daughter of a rich merchant, and her genie, Basit, as they encounter the creatures of legend and folklore: a lonely cave demon seeking a home; a flying, fire-breathing horse who has lost his mate; a dragon searching for his family; an evil genie hunting for the man who put him in a lamp; and a merboy prince cast out of his undersea kingdom.
Read more
Other Formats: Audible Audiobook , Paperback 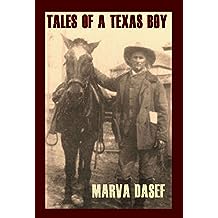 Tales of a Texas Boy Aug 9, 2008
by Marva Dasef
( 66 )
$0.99
How do you handle a crazy jackass? Eddie knows. If you ask Eddie, he'll tell you pigs can fly and show you where to find real mammoth bones. Take his word for it when he tells you always to bet on the bear. These are things he learned while dreaming of becoming a cowboy in West Texas during the Depression. Through Eddie, the hero of "Tales of a Texas Boy," we find that growing up is less about maturity and more about roping your dreams. Hold on tight. It's a bumpy ride. A wonderful read for anyone who enjoys books like "Little House on the Prairie" or "Tom Sawyer." A great bit of nostalgia for seniors, too.
Read more
Other Formats: Audible Audiobook , Paperback 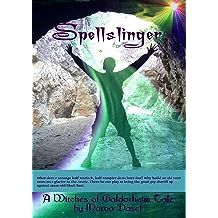 Spellslinger (The Witches of Galdorheim Book 5) Jun 22, 2013
by Marva Dasef
( 7 )
$0.99
What does a teenage half-warlock, half-vampire do to have fun? Why build an old west town on a glacier in the Arctic. There he can play at being the good guy sheriff up against mean old Black Bart.

That things will go horribly wrong is a given. But how does Rune get into and out of the predicament?

This prequel story to the Witches of Galdorheim series gives the reader a chance to get to know the smart-aleck kid, Rune, before he got his magic down pat.
Read more
Other Formats: Audible Audiobook , Paperback 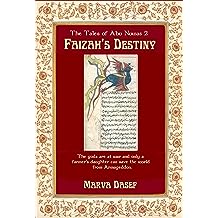 The village magician has gone missing. His four pupils think he has left a clue to his whereabouts in the Magicalis Bestialis--the book of magical creatures. They must seek the help of the elusive Simurgh, the mythical birds who know all the secrets of the universe.

However, this is not an easy camping trip into the mountains. Spirits, gods, and demons confront the four friends, who are not aware they’re being set up by otherworldly forces for a much larger task.

A farmer’s daughter, Faizah is chosen to lead the humans in the battle. She must persuade a slave, an orphan, and a rich merchant’s son to join in the battle on the side of good. Although divided by Dev, the evil god of war, the teens must band together to find the Simurgh, rescue their teacher, and stave off Armageddon.
Read more
Other Formats: Audible Audiobook , Paperback 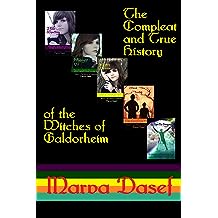 The Compleat and True History of the Witches of Galdorheim Aug 18, 2019
by Marva Dasef
( 1 )
$4.99
After 10 years in print as individual books, the Witches of Galdorheim saga is now presented with every word of of the four books and one short story comprising the entire series. This is it in all its radiant glory.
*NOTE: Compleat is an archaic spelling of the word complete. See Izaak Walton's "The Compleat Angler."

Bad Spelling: A klutzy witch, a shaman's curse, a quest to save her family. Can Kat find her magic in time?

Midnight Oil: Shipwrecked on a legendary island, how can a witch rescue her boyfriend if she can’t even phone home?

Scotch Broom: A magical trip to Stonehenge lands a witch in the Otherworld where an ancient goddess is up to no good.

Blood Ties Tested: Unfortunate events lead a half vampire boy into indulging his vampire side, leaving him with regret and sadness. Can dear old Dad help him forgive himself?

Spellslinger (short story): What does a teenage half-warlock, half-vampire do to have fun? Why build an old west town on a glacier in the Arctic. There he can play at being the good guy sheriff up against mean old Black Bart. That things will go horribly wrong is a given. But how does Rune get into and out of the predicament?
Read more 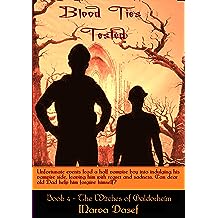 Blood Ties Tested: Book 4 of the Witches of Galdorheim Mar 19, 2018
by Marva Dasef
( 5 )
$0.99
Unfortunate events lead a half vampire boy into indulging his vampire side, leaving him with regret and sadness. Can dear old Dad help him forgive himself?

Following the events in the series Witches of Galdorheim, this additional tale relates what happens to Katrina the Witch's younger brother, Rune. Half vampire and half warlock, he faces life with a wisecrack and some powerful magic. Whatever happens, he does not want to be a vampire like his father. Unfortunate events lead him to fatally call on his vampire half. This failure leaves him in anguish. How can he assuage the guilt he feels? His mother thinks he needs to visit dead old dad, a vampire residing in the Tatras Mountains of Slovakia.
Read more
Other Formats: Audible Audiobook , Paperback 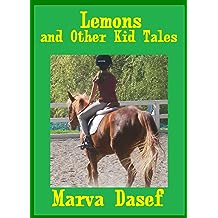 Lemons: And Other Kid Tales Sep 8, 2014
by Marva Dasef
( 4 )
$0.99
Lemons: Karen is horse crazy. One day, everything seems to go wrong.
One Fine Dog: Dogs weren't just pets, but working members of the family. Some, they could do amazing things and perform feats almost like magic.
Practical Cat: Boots wanted to explore outside, but finds out there's no place like home.
Read more
Other Formats: Paperback 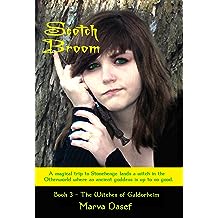 Scotch Broom (The Witches of Galdorheim Book 3) Apr 8, 2014
by Marva Dasef
( 11 )
$0.99
A magical trip to Stonehenge lands a witch in the Otherworld where an ancient goddess is up to no good.

Kat expects to have a great time on her graduation trip to Stonehenge. However, from the moment she leaves the witches’ arctic island, Galdorheim, she gets in nothing but trouble. Her younger half-brother tries to horn in on her trip, she gets lost in the magical Otherworld realm, is led astray by a supposed friend, then she has to confront a Scottish goddess who’s fallen on hard times.

While dodging the goddess’ minions and trying to find her way out of the Otherworld, Kat soon learns she shouldn’t underestimate the old has-been for one second; the crone still has a few tricks that can drain a witch’s magic in a flash. To make matters worse, Kat's brother secretly followed her into the Otherworld. Now he’s in danger too. Kat has to go one on one with the goddess to save herself and her brother. 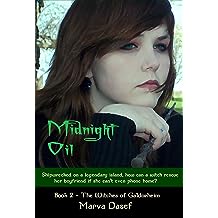 Midnight Oil (The Witches of Galdorheim Book 2) Apr 8, 2014
by Marva Dasef
( 11 )
$0.99
Shipwrecked on a legendary island, how can a witch rescue her boyfriend if she can’t even phone home?

Kat is a nervous wreck waiting for her boyfriend's first visit to her Arctic island home. He doesn't show up, so she's sure he’s given her the brushoff.

When she learns he’s disappeared, she sets out on a mission to find him. Things go wrong from the start. Kat is thrown overboard during a violent storm, while her brother and his girlfriend are captured by a mutant island tribe. The mutants hold the girlfriend hostage, demanding the teens recover the only thing that can make the mutants human again–the magical Midnight Oil.

Mustering every bit of her Wiccan magic, Kat rises to the challenge. She invokes her magical skills, learns to fly an ultralight, meets a legendary sea serpent, rescues her boyfriend, and helps a friendly air spirit win the battle against her spiteful sibling. On top of it all, she’s able to recover the Midnight Oil and help the hapless mutants in the nick of time.
Read more
Other Formats: Audible Audiobook , Paperback 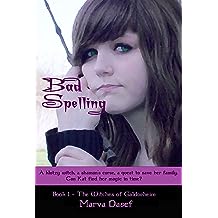 Can Kat find her magic in time? If you’re a witch living on a remote arctic island, and the entire island runs on magic, lacking magical skills is not just an inconvenience, it can be a matter of life and death–or, at least, a darn good reason to run away from home. Katrina’s spells don’t just fizzle; they backfire with spectacular results, oftentimes involving green goo. A failure as a witch, Kat decides to run away and find her dead father’s non-magical family. But before she can, she stumbles onto why her magic is out of whack: a curse from a Siberian shaman. The young witch, accompanied by her half-vampire brother, must travel to the Hall of the Mountain King and the farthest reaches of Siberia to regain her magic, dodging attacks by the shaman along the way.
Read more
Other Formats: Audible Audiobook , Paperback 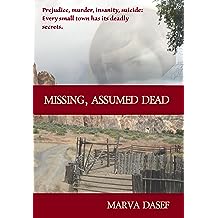 When Kameron McBride receives notice she's the last living relative of a missing man she's never even heard of, the last thing she wants to do is head to some half-baked Oregon town to settle his affairs. But since she's the only one available, she grudgingly agrees.

En route, she runs afoul of a couple of hillbillies and their pickup in an accident that doesn't seem...accidental. Especially when they keep showing up wherever she goes. Lucky for her, gorgeous Deputy Mitch Caldwell lends her a hand, among other things. Her suspicions increase when the probate Judge tries a little too hard to buy the dead man's worthless property.

Working on a hunch and trying to avoid the Judge's henchmen, Kam probes deeper into the town's secrets and finds almost no one she can trust. With Mitch's help, she peels away the layers of prejudice, suicide, murder, and insanity. But someone in town doesn't like her poking around, and when they show their intentions by shooting her through the police chief's office window, the stakes are raised. Kam must find out what really happened to her dead relative before someone in this backward little town sends her to join him.

And she thought Oregon was going to be boring.
Read more
Other Formats: Audible Audiobook , Paperback 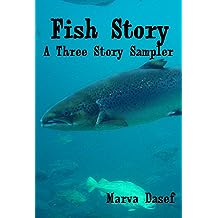 The Vision - Charlie can't get terrifying images out of his head, but why?

Chilpequin 22 Miles - The bartender is big and hairy. Could it be? Nah, it couldn't. Could it?
Read more