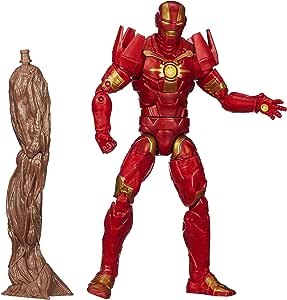 When Tony Stark teamed up with the Guardians of the Galaxy, he built a new suit of modular armor designed for extended missions in the blackness of space! The Guardians of the Galaxy need all the help they can get to save the cosmos from destruction and this is your chance to build them a mighty ally! This 6-inch Iron Man figure is ready for battle and he's armored to protect himself from the enemy - and outer space. But he also comes with the right leg part you need to build the plant-humanoid warrior Groot! Collect all 6 parts (other figures sold separately) and complete the hero's body! Then send your Iron Man and other figures (sold separately) into battle at his side. The action is epic when you build your own Groot figure! Marvel products are produced by Hasbro under license from Marvel Characters B.V.

4.4 out of 5 stars
4.4 out of 5
136 global ratings
How are ratings calculated?
To calculate the overall star rating and percentage breakdown by star, we don’t use a simple average. Instead, our system considers things like how recent a review is and if the reviewer bought the item on Amazon. It also analyzes reviews to verify trustworthiness.

Monty Moonlight
3.0 out of 5 stars Tie in Sales. Movie figure fans forced to buy comic-based figures. Ugh.
Reviewed in the United States on September 25, 2015
Verified Purchase
Honestly, I had no interest in this figure. I love Marvel and Iron Man, but while I AM a comic reader, I don't often read superhero comics (sometimes; I'm trying to do it more, but not often). I'm a huge superhero fan from other media. When it comes to action figures, I generally only collect the figures based on motion media (film, television, animation). Frankly, they just have waaaay more realism and detail anyway. I LOVE the Marvel Cinematic Universe, and I needed this piece of Groot to complete him. While I'm sure this Iron Man figure is probably a fine figure and fine representation of the version he is supposed to be, I kinda feel I was trapped into buying him, as well as the Nova figure, due to it being the only way to complete Groot. At the prices these figures run for (when newly released, anyway), it's so not cool. Now, I've gotta find a way to get rid of these two figures I don't want, and I am basically being charged 20 bucks per limb for Groot whenever it's a figure I don't want. What's worse, now they are releasing movie-based build a figure lines in which only one or two of the figures the parts come with are actual movie figures. Guess what this means, Hasbro? It means I'm just not getting any. I'm not buying a ton of figures I don't want at 20 bucks a pop just to build the Hulkbuster Iron Man or Ultron, or Thanos. I'd buy other movie characters for them though. C'mon, just do the logical thing and make the right products for the right audience. If the build-a-figure is a movie character, give us MCU characters. There are plenty of great ones we don't have: Daredevil, Scarlet Witch, TV's Agents of S.H.I.E.L.D., Agent Carter, Falcon, Pepper, Quicksilver, Ant-Man with his mouthpiece on, other Guardians of the Galaxy movie characters, Howard the Duck (heck, I'd even buy an 80's movie Howard the Duck, ha),... you get the idea. Anyway, the Groot figure was excellent when completed, but when you figure it up, the cost was terrible. I mean, when you have to get two figures you don't want, that's like paying 40 bucks for him right there. Kills the charm of a build a figure that is supposed to feel like getting a bonus, bigass figure for free.
Read more
One person found this helpful
Helpful
Comment Report abuse

AzaStudio
4.0 out of 5 stars Good but misses the mark.
Reviewed in the United States on January 6, 2015
Verified Purchase
I am quite amazed at the quality of all these(sorry this is mostly a copy paste review as all the figures are of the same build quality). Each one has nearly a full range of motion along with what seems to be high quality joints. Plus the groot piece is awesome, my kids are going crazy waiting to get the last pieces, but from what we do have, both legs, left arm, upper torso, I can say without a doubt that the groot figure is of the same crazy high quality.

Now more specifically, this Iron Man is not my favorite design, the colors are odd and one of his hands are closed, you wont be sharing a gun with this one, though honestly Iron Man is a weapon all itself. The other thing that bothers me a little is this is the original coloring, despite all the other figures mirroring the new style this one is the same, so I guess lets hope the next movie doesn't "improve" on the color making this one a stand out(if they bring in Iron Man at all).

antonio rodriguez
5.0 out of 5 stars Guardians iron man
Reviewed in the United States on August 29, 2019
Verified Purchase
Great figure! I love how it looks, the articulation is good, the paint looks awesome, and it's from my favorite guardians comic book. I don't know why it took me this long to review the figure. Get it for your iron man collection.
Read more
Helpful
Comment Report abuse

McLovin
3.0 out of 5 stars Iron Man
Reviewed in the United States on March 28, 2016
Verified Purchase
My oldest son who is eight and loves iron man was pretty happy with this one. One of the shoulder pads already fell off and with it being small and with a house full of Lego's and other action figures your guess is as good as mine as far as where it went. I would give it three and a half stars overall as durability is already an issue less than a week of playing with it.
Read more
Helpful
Comment Report abuse

IamSHERLOCKED78
5.0 out of 5 stars Not bad
Reviewed in the United States on January 20, 2015
Verified Purchase
I was holding out buying this because this is not the first Iron Man figure I wanted to add to my collection. When it went on sale for less then $10 I had to pick it up, the Groot leg alone was worth that price. Out of the box it actually looks pretty good. Better, actually, then I expected. Not may favorite and I still want to pick up the Marvel Select version.
Read more
One person found this helpful
Helpful
Comment Report abuse

Israel
3.0 out of 5 stars Seems good but...
Reviewed in the United States on September 7, 2015
Verified Purchase
I mean, it's Iron Man in the GoTG outfit but, WTF is wrong with the bicep's articulation? The overall figure looks amazing, but the ball jointed biceps and shoulders are fragile and with a little effort, they could become loose or worse, broken.

I'd recommend buying another IM figure in 6" scale, if you are more the Carded collector, pick this up, if not, move along, this is not the IM you are looking for

K. Bell
5.0 out of 5 stars The FINAL FRONTIER?
Reviewed in the United States on February 13, 2015
Verified Purchase
For the VALUE$ this is a great SPACE fairing IRON-MAN variant.

Full articulation, annoying SHOULDER-BOOSTERS one falls off easily - due to the angle arm is held in blister shell. And just like with the THOR/IRON-MAN COMIC PACK His head tilts back nicely for flight, whereas 6inch THOR does not.

Purchased for IRON-MAN, don't give a HOOT about GROOT..

Articulated Heroines
5.0 out of 5 stars Tony Stark teams up with the Guardians!
Reviewed in the United Kingdom on October 19, 2015
Verified Purchase
Nice looking figure of Tony Stark in his Space Iron Man suit that he wore during Brian Bendis run on the Guardians of the Galaxy. A neat variation on the usual look the suit itself is mostly red with small patches of Gold and a reactor core, and looks great standing next to other Iron Man Marvel Legends. The figure also comes with the Left Leg of Groot, and when you buy all the other figures in this series you can combine the parts together to make your own Groot figure. Groot will tower over the rest of the 6 inch figures, but looks awesome! Here's hoping we get some more comic styled Guardians soon in the Legends Scale.
Read more
Report abuse

Lolly Bear
5.0 out of 5 stars Detailed, quality, awesome!
Reviewed in the United Kingdom on October 3, 2016
Verified Purchase
Great quality! Collect the set to built your own Groot. Very detailed and no where near flimsy as some figures can be. Strong and very good quality :)! Happy children.
Read more
Report abuse

Meta
5.0 out of 5 stars Five Stars
Reviewed in the United Kingdom on April 3, 2015
Verified Purchase
JUST WHAT I WANTED
Read more
Report abuse
See all reviews

Page 1 of 1 Start overPage 1 of 1
This shopping feature will continue to load items when the Enter key is pressed. In order to navigate out of this carousel please use your heading shortcut key to navigate to the next or previous heading.
Back
Next
Pages with related products. See and discover other items: marvel figure, marvel's guardians of the galaxy, the thing marvel, stark armor