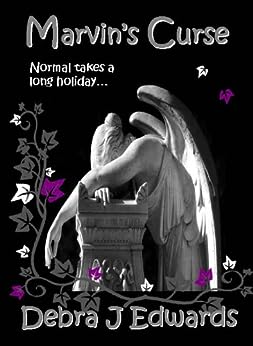 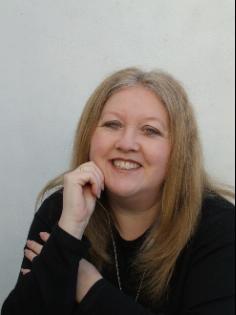 by Debra J Edwards (Author) Format: Kindle Edition
See all formats and editions
Sorry, there was a problem loading this page. Try again.
How would you handle the dead?

After losing his dad, 17 year old Marvin finds he can see and talk to the dead, an inherited 'gift'. Bonus, you might think, but Marvin hates it. It makes him different and he just wants to be 'normal'. He meets Stella in the graveyard that backs onto the house he's just moved into.

'My name is Stella, Stella McCartney. It says so inside my trousers.' (!?!)

A mysterious business card reveals that Stella has lost her memories and all signs point to Moghador, a gateway to hell where a pawnbroker holds the answers.
Read more
Previous page
Next page

Debra J Edwards never set out to be a writer at all. She wanted to be a window dresser - but ended up working at a bank. Many years later, after several failed attempts at writing poetry, Debra gave in to the fairies and started writing. For the past eight years, fairies have ruled her days and nights - stroppy teenage tooth fairies, that is!

Her middle grade stories about Aggie Lichen and her gang have sold around the world, and are loved by children from 9 - 90.

Writing also for young adults, Marvin's Curse is her first paranormal YA novel. A second novel, The Iron City, is due for release in December 2016.

Debra lives in Norfolk, UK. Home is a large wooden shack in a disused chalk quarry with husband and their psycho staffy, Buster.

4.4 out of 5 stars
4.4 out of 5
32 global ratings
How are ratings calculated?
To calculate the overall star rating and percentage breakdown by star, we don’t use a simple average. Instead, our system considers things like how recent a review is and if the reviewer bought the item on Amazon. It also analyzes reviews to verify trustworthiness.
Top reviews

Jada Ryker
5.0 out of 5 stars Imaginative Young Adult Paranormal/Horror Book
Reviewed in the United States on June 7, 2014
Verified Purchase
Marvin's life couldn't get much worse. He lost his father. He gained a stepfather. His stepfather has forced the family to move. The house is hideous, located next to a graveyard, and it smells. Of old, dead people.

Marvin's father still visits him as a ghost. He encourages his son to use his inherited ability to see ghosts. Marvin just wants to be a normal boy.

Xeia
4.0 out of 5 stars Very Good Young Adult Book
Reviewed in the United States on July 19, 2013
Verified Purchase
In general I do not read YA books, but I did read Marvin's Curse as I am a ghost junkie and well, I like the author. This book is geared as a Young Adult book and it's written very well. The storyline is awesome and although I had some problems (mostly little things like why she couldn't remember her name but could remember the name of the Ivy on the headstone, and the fact it was written with English (European) colloquialisms and being American I had to look words up - ha.) I have to say this author has a wonderful way of writing and I'd recommend this book, to both YA and adults (even if I found some fault of my own). I think all in all I'd love to see this character evolve, grow up, not have so much anger and perhaps come into his own as a spirit medium. This book certainly has the potential for the character to do so. I would like to see the idea behind the city in the book explored more, why, where, who, how, etc. The character I didn't care for though was Stella, I just simply didn't like her. But then as I stated I'm not a young adult, so perhaps that's why. Marvin sort of grated a bit as well in the beginning but was much better toward the end. I'd highly recommend this read to any YA, and to those of us who are older and into the ghost genre, but I caution here, this is written for young adults, remember that.
Read more
5 people found this helpful
Helpful
Report abuse

Ravannah Rayne
5.0 out of 5 stars Great book
Reviewed in the United States on July 5, 2014
So when I saw this book II was a bit hesitant because the book while its paranormal sounded like it was something that a young child would enjoy which typically isn't my cup of tea. However, after reading Marvins Curse I actually really liked it. The book puts a new spin on teenage angst and can be enjoyed by readers of all ages. The book follows this young boy who is cursed with the ability to see the dead which allows him to see his dad after he dies but its not a "gift" that Marvin wants. In addition to losing his dad he is forced to move to an old house that sits near a graveyard all thanks to his new stepdad. In addition to being pestered by his dead dad he does come in contact with a girl who will forever change the way he sees his "Curse". That is all the informaton that you are getting out of me so if you want to know more you must read this amazing book! If you have yet to get your copy of Marvins Curse you should definitely do so now!!!
Read more
10 people found this helpful
Helpful
Report abuse

Lakshmi C
3.0 out of 5 stars Interesting, Dark and Funny
Reviewed in the United States on May 15, 2016
This book is a great addition to the YA Paranormal genre. Marvin was easy to relate to, he had more problems than the average teenager and was trying to cope on his own.

1 Marvin
He was a teen who had a lot of trouble on his hands. He inherited the ability to see the dead but viewed it as a curse. His personal life was messy and he had no support system. He had the tendency to say the wrong thing at times which made him endearing.

2 Stella
She was suffering from amnesia, which makes both Stella and the reader clueless at first. She was funny and interesting, a great partner for Marvin. When you finally learn about who she was, its shocking and things take a dangerous turn.

3 Pawnbroker
The concept was interesting - where a person could get rid of his memories and nightmares. The act sounds reasonable but the consequences were horrible.

4 Moghador
The author has described the town really well. You can picture a dark, evil town, crawling with spirits and covered in fog. The setting dominates the story, takes you into unfamiliar territory and builds tension.

1 Inconsistent pacing
The introduction to Marvin's world was perfect. You learn about why Marvin is the way he is, which helps you understand him. Suddenly the pace slows to such an extent, it would make a tortoise proud. After that, it's fast again, with everything falling into place conveniently.

2 Ghosts
Marvin ignores the ghosts because they need him to deal with their unfinished business. But none of the ghost characters were developed, which seemed a bit odd to me.

<b>*The Graveyard Issue* </b>
Someone would wonder why Marvin seeks refuge in the graveyard, as there are lots of spirits waiting for him there. I think Marvin used the graveyard as a safe place, where he could ignore the dead and get away from the living.
I received this ARC in exchange for an honest review
Read more
One person found this helpful
Helpful
Report abuse

Lauren Alumbaugh
5.0 out of 5 stars Closure
Reviewed in the United States on May 21, 2016
This is a story about Marvin, a young man who can see ghosts, and is quite troubled in life. This isn't your classic ghost story, this is a story about finding redemption and closing open chapters of your life. I found the story line quite unique and interesting and absolutely loved Marvin. Hopefully there is going to be a second book where we find out if Marvin can repair his home life and what happens with Stella aka Rose. If you believe in ghosts or love a happy ending after a heck of a journey than give this book a read. I was provided a copy of this book by the author in exchange for my honest review.
Read more
5 people found this helpful
Helpful
Report abuse
See all reviews

tracy langsley
5.0 out of 5 stars Brilliant
Reviewed in the United Kingdom on June 23, 2015
Verified Purchase
I am a long way from being a young adult (and then some) but I really enjoyed this book! (Why should Young adults have all the fun) This would make for a great start to a series. I loved the description of Moghador and all the lost souls plus the relationship between Marvin and Stella. Would recommend this to any age group
Read more
6 people found this helpful
Report abuse

I bought this on my Kindle and thought I would just read the first chapter...a wee while later and I had read the whole thing from beginning to end as I just could not put it down!

The characters have real depth and you are drawn into the world(s) of Stella and Marvin. Supernatural, teenage and adult lives are all showcased in this book, the troubles and traumas that go alongside being a teenager are all expored in a sensitive and understading way, but Ms Edwards doesn't shy away from dealing with some very sensitive, and often hard to deal with, issues.

Now I am no YA (by quite a few years) but would recommend this to anyone who is interested in the ghostly/supernatural world, I would thoroughly recommend to YA's and older alike.

Debra J Edwards writing continues to impress me and I am very much looking forward to what ever she has planned next...
Read more
6 people found this helpful
Report abuse

AJE
4.0 out of 5 stars Four Stars
Reviewed in the United Kingdom on August 5, 2015
Verified Purchase
really enjoyed it,perfect for young adults
Read more
8 people found this helpful
Report abuse
See all reviews
Back to top
Get to Know Us
Make Money with Us
Amazon Payment Products
Let Us Help You
EnglishChoose a language for shopping. United StatesChoose a country/region for shopping.
© 1996-2021, Amazon.com, Inc. or its affiliates