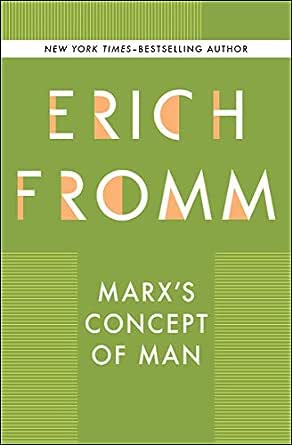 “Erich Fromm is both a psychologist of penetration and a writer of ability.” —Chicago Tribune

Erich Fromm (1900–1980) was a bestselling psychoanalyst and social philosopher whose views about alienation, love, and sanity in society—discussed in his books such as Escape from Freedom, The Art of Loving, The Sane Society, and To Have or To Be?—helped shape the landscape of psychology in the mid-twentieth century. Fromm was born in Frankfurt, Germany, to Jewish parents, and studied at the universities of Frankfurt, Heidelberg (where in 1922 he earned his doctorate in sociology), and Munich. In the 1930s, he was one of the most influential figures at the Frankfurt Institute of Social Research. In 1934, as the Nazis rose to power, he moved to the United States. He practiced psychoanalysis in both New York and Mexico City before moving to Switzerland in 1974, where he continued his work until his death.

4.1 out of 5 stars
4.1 out of 5
7 customer ratings
How does Amazon calculate star ratings?
Amazon calculates a product’s star ratings based on a machine learned model instead of a raw data average. The model takes into account factors including the age of a rating, whether the ratings are from verified purchasers, and factors that establish reviewer trustworthiness.
Top Reviews

That's the gut reaction of most of us. Why is this? Why is the man who's ideas stimulated nearly half the world to revolution automatically rejected without even being seriously looked at by most of us the U.S. today? What's that you say? "History shows us that communism is an impossible system that leads to the greatest tyranny."

The fact is Marx is much more than communism. His most famous work is not called Communism but Capital. (The manifesto was a small pamphlet next to the thousands of pages of the planned four volumes of Capital). He is strongest in his analysis of the very history and machinery of this economic system. In fact, it is in his critique of capitalism (not his proposition of communism) that he is most original.

Today, we see yet another crisis in global capitalism. Almost all of us who seek understanding of this crisis do so using the very same conceptual tools of the capitalist doctrine itself. But what if there are incorrect assumptions that the governments, universities and media networks of the world continuously overlook?

Marx's Concept of Man serves as an introduction to such an analysis. It is a compilation of various manuscripts of the early Marx and is quite digestible--especially after Fromm's preface. Erich Fromm--a significant 20th century philosopher in his own right--introduces us to some of the most timeless aspects of Marx's concept of man in a way that makes his thought significant to this day.

The Peripatetic Reader (James Kalomiris)
5.0 out of 5 stars Incredible and Enlightening
Reviewed in the United States on December 1, 2012
This is a book that should, but given the existing political culture, won't be made required reading in schools and universities.

Eric Fromm was a humanist writer who lived from 1900 to 1980, and exerted a strong influence on Baby Boomers with his popular books. This book about Humanistic Marxism shook the intellectual world when it was first published in 1961. It rattled the conventional wisdom at the time it was first published. The West had, as Fromm readily admits, a glaring misconception of what Marxism meant. They could hardly be blamed for this misunderstanding. The only example the West had to look towards to see Marxism in action was to observe the Soviet Union. The Eastern Block shares responsibility in misconstruing the meaning of Marx. Its monumental government apparatuses, unwieldy bureaucracies, its virulent oppression of human rights, all these characteristics were definitely NOT how Marx envisioned a communistic society.

Fromm goes into great detail on the humanistic philosophy of Marxism. If Hobbes' Leviathan emerged to protect man from a state of nature, the true goal of society according to Marx is to provide the conditions by which man may reestablish his relationship with nature, with others, with society at large, and with himself. The impediment to this reestablishment is alienation, a common concept of Marx, which drives a wedge between man and the other elements to his life and to himself. As Fromm repeatedly reminds the reader, alienation does not simply exist in Western societies; it is equally prevalent in those countries under a so-called "Communist" form of government. Fromm states that the governments of Lenin, Stalin and Khrushchev were simple totalitarian states.

There is a decided spiritual aspect to Marx, in that the goal of a person's life is self-realization. This self-realization, however, is one which allows a person to achieve their own personal goals, based on that person's abilities, talents and labor.

Fromm was addressing a world in the middle of the Cold War, and published in an America just emerging from the crushing conformity of the 1950's. It has continued relevance today, where the societal pressures are hidden and the urge to conform reemerging.

This is a short book and can be read in two or three sittings. It is a well worth read.
Read more
10 people found this helpful
Helpful
Comment Report abuse

M. A. Krul
4.0 out of 5 stars Marx as a humanist philosopher
Reviewed in the United States on December 14, 2006
"Marx's Concept of Man" is essentially a pamphlet establishing the humanist, philosophical side of Marx as against the orthodox, Soviet view of Marx as tyrannical and economistic, and against the degree to which this view has seeped into academic literature in the West also. Famous Freudian Marxist Erich Fromm uses the "Economic and Philosophical Manuscripts" as well as "The German Ideology" to stress the importance of humanist concepts such as alienation, freedom, and creativity for Marx, and in so doing explains what these and similar terms mean in Marx' work. Fromm has clearly paid careful attention to Marx' philosophy, and this part of the book is quite good as a simple overview.

The second half of the book covers the English translation of the aforementioned "Economic and Philosophical Manuscripts" by Tom Bottomore, as well as excerpts from various other works by and about Marx meaning to show his humanism, his good nature, and his sensitivity to culture. Of special interest are the excerpts from the memoirs of those who knew Marx, like his daughter Eleanor as well as Paul Lafargue. These works are often quoted, but rarely does one find a larger part in English, not even in McLellan's biography.

Fromm goes a bit overboard here and there in stressing Marx' 'spiritual' nature. Although nothing Fromm writes is of itself incorrect, it may unwittingly reinforce the old canard of Marxism 'really' being a religion, and Marx a millennarian prophet, and so on. Fromm obviously rejects this old refrain, but should have made that clearer. In other aspects this collection is an interesting primer on Marx as thinker on human action and human nature, and sheds good light on this side of Marxist thought for those not familiar with it.
Read more
21 people found this helpful
Helpful
Comment Report abuse

Craig Chalquist, PhD, author of TERRAPSYCHOLOGY and DEEP CALIFORNIA
5.0 out of 5 stars about time....
Reviewed in the United States on June 2, 2000
...someone dusted off Marx and took a good psychological look at the wealth in his writings! One needn't be a Marxist (I am not) to appreciate this fine book. My one concern is that Fromm is to Marx as Kaufmann is to Nietzsche: both men either ignore or euphemize the weaknesses in the visionaries they write about (e.g., Kaufmann's remark that Nietzsche's hateful, cynical, and demeaning remarks about women "do him little credit"). Nevertheless, this book provides a good compensation for the Western tendency to demonize a man very much misunderstood by those who turned his writings to political purposes.
Read more
12 people found this helpful
Helpful
Comment Report abuse
See all reviews from the United States

Serafina
4.0 out of 5 stars One step closer
Reviewed in the United Kingdom on August 21, 2011
Verified Purchase
No-one reads Darwin, no-one reads Freud, and no-one reads Marx. Our views of all these thinkers is based on what other people say they have said, with the results we see today. There's no substitute for the real thing, but we seem incapable of looking at reality full on. I myself have only looked at 'bits' of Marx, but at least I know he isn't what they say. If anything he belongs to an identifiable lineage of thinking, as does Fromm himself. This lineage you could say began in man's early days on earth, culminating in philosophies, which then become hardened into codes of laws at a later stage. Its possible that Marx is too 'hard' for us, and that a mediator is required, so its better to have one you trust. As a link in the chain, Fromm has read Marx, therefore the question is only whether he is to be trusted. I would say he is, from his other writings. There appears to be nothing startling in it, only what any reasonable person would already think about human beings. But there's the rub, the reasonable people are not creating the world. So what are we going to do about it?
Read more
2 people found this helpful
Helpful
Sending feedback...
Thank you for your feedback.
Sorry, we failed to record your vote. Please try again
Report abuse