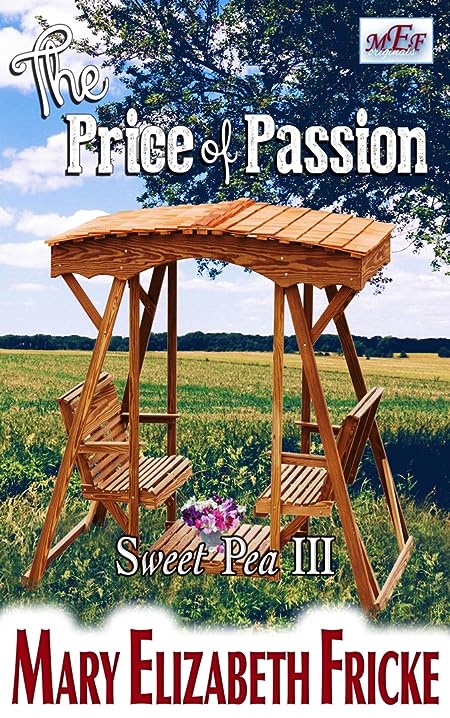 I am a published author who also works in partnership (owner/operator)with my husband on our family farm. The farm itself has belonged to and consecutively farmed by my husband's family for over 100 years. We have two grown (married) sons and two grandchildren.

I've had a number of articles and poems published in national magazines or the internet over the years. I've worked as a freelance writer publishing a wide variety of subjects--from historical and religious topics to sales descriptions and personal-feature writing, some poetry and my autobiography.

Dino Godzilla and the Pigs (My Life on our Missouri Hog Farm) was published in 1993 by SoHo Press. It is a serious recounting of our life during the years we were raising our sons and managing a productive 200 sow hog operation. These days, life is a bit different as our sons no longer live on the farm and we now raise Angus cattle instead of hogs.

I have also been a member of the Heartland Writers Guild since before 'Dino' was published and served as newsletter editor of the Guild's monthly newsletter, The Heartland Journal, from 2002 thru 2015.

2008 thru 2013 I contributed weekly articles to http://www.7Score10.com a website devoted to recounting day by day occurrences of the Civil War. and also wrote articles for the newsletter of http://www.patriotic-jewelry.com.

My Romantic Suspense Fiction E-novel PIGEON IN A SNARE was officially released By AKW e-books on May 16, 2014. AKW also released ROSES FOR THE SPARROW on Oct. 3, 2014.

I took a short breather over the holidays and decided the Sweet Pea story really should be under one cover so I published all three books of the trilogy as a gift set (for Valentines Day) in Feb. 2018.

Shattered Image was published in Dec. 2020 both as an ebook and paperback. Another romantic suspense set in mid-Missouri, it is totally unrelated to anything I've previously written. 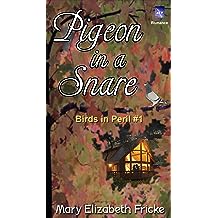 Pigeon In A Snare (Birds in Peril Series) Dec 31, 2014
by Mary Elizabeth Fricke
( 9 )
$1.99
He was her knight in shining armor. She was his lost love — the one girl with whom life might have been worth sharing — if another had not told lies deliberately intended to separate them. Now her life is in serious danger. Can he save her? Is it worth the blood and tears it will take to salvage not only themselves, but their families and their businesses, and rekindle their lost love? 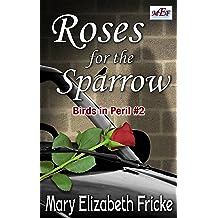 Roses for the Sparrow (Birds in Peril Series) Dec 31, 2014
by Mary Elizabeth Fricke
( 6 )
$1.99
It was bad enough that her best friend/employer took off on an extended honeymoon leaving Jani to oversee the building of their new business alone. In strolls this tall, dark and handsome contractor who makes it clear he intends to become the center of Jani's attention. But, is Rick too good to be true? Why is he the one who continually finds long stemmed roses on her car or at her door? What kind of admirer leaves expensive roses to freeze on windshields or be trampled on the floor?

Some girls have all the luck─ or maybe that's no luck at all.

How often does a girl have two stalkers after her at the same time? 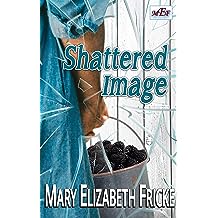 Shattered Image Dec 25, 2020
by Mary Elizabeth Fricke
( 6 )
$1.99
As a child, she was called 'Betsy'. In college, she became 'Liz' and "Elizabeth' as a woman of independent means ─or so she portrayed herself to others. The image of the child often taunted as 'the convict's daughter' to the woman known as 'the ice queen' was shattered in the realization that no matter what the name, what the image, underneath it all, everyone was not who others believed them to be. Especially not those she loved the most.
Read more
Other Formats: Paperback 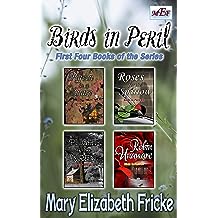 Birds in Peril Boxed Set Sep 6, 2019
by Mary Elizabeth Fricke
$3.99
Five women met, fell in love with and married men who aided the arrest and subsequent imprisonment of Sheldon Humsler. Even though the events that disrupted their lives, did not necessarily involve Humsler, they certainly invoked the conviction that one-day Humsler would find a way to enact his revenge. All of these women and the men they married are in some way closely connected to Humsler’s arch enemies, Benton Cromwell, T.J. Harvester and Thad Hunt. Because of Humsler, Benton Cromwell’s life and livelihood have become so precarious he now lives as an invalid on borrowed time. However, his friends, T.J. Harvester and Thad Hunt, continue to grow in family, and in deed. Both are well-loved by many. The time is near when a final confrontation with Humsler must occur. Humsler has an accomplice…someone closely connected to Hunt….but who could that possibly be?
Read more 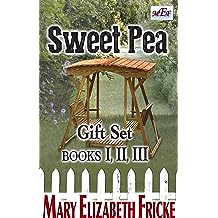 Sweet Pea: Box Set / Books I, II, III Feb 11, 2018
by Mary Elizabeth Fricke
( 2 )
$2.99
To one man she gave her virginity; to another, she gave her heart. One, she would mourn. With the other, she would share life's triumph and turmoil. With both, she would endure times of love, and passion and complete happiness as well as times of despair, confusion, and sorrow. One day at a time—each day, building unforgettable memories. 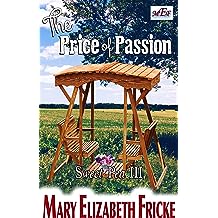 The Price of Passion (Sweet Pea III) Nov 30, 2017
by Mary Elizabeth Fricke
( 3 )
$1.99
Sweet Pea III: The Price of Passion (1984-1990)
Time has come and gone, years pass, Johnie’s children are growing and she has learned to accept her parents’ untimely death. Her friendship with Marsha continues to thrive. By the time ‘the 70’s’ become ‘the 80’s’, Johnie has also built an enduring relationship with her mother-in-law, Amie. Her marriage to Phil is a sham. Although they tried, they were never able to rekindle the trust they once shared. All those years, a secret part of Johnie’s soul survives nurturing the memory of Jake. Fate strikes several more dramatic blows and once again, everything changes.

Description of the Sweet Pea Trilogy: To one man she gave her virginity; to another she gave her heart. One, she would mourn. With the other, she would share life's triumph and turmoil. With both, she would endure times of love, and passion and complete happiness as well as times of despair, confusion, and sorrow. One day at a time—each day, building unforgettable memories.
The Sweet Pea Trilogy spans from the late 1960's into 2009. Set in rural Missouri, it is a story for those who remember the profound cultural changes and historical events that took place in the later part of the 20th Century.
This is a nostalgic story of growing up; of forging lifelong friendships and loyalty within family that supports every life event, good or bad. It is a story of love that binds a man and a woman despite all odds. It is also a story of obsessive hatred and how such hatred destroys not only the innocent, but those who hate.
Read more 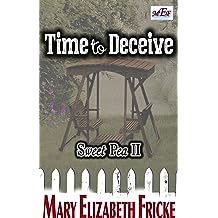 Time to Deceive: (Sweet Pea II) Oct 7, 2017
by Mary Elizabeth Fricke
( 2 )
$1.99
Getting married means you’re going to live happily ever after with your true love. Right? Unfortunately, for Johnie, the first thing she learns after marrying Phil is the necessity of deception as she conceals her love for Jake. Fate continues its cruel intervention when members of Johnie’s family meet untimely deaths and Jake returns to mourn the loss of his sister. Jake and Johnie reunite briefly, painfully, in determination to adopt their four-year-old nephew, B.J. Together, they tackle the on-going vengeance of Phil’s sister, Brenda. Johnie’s dream of happiness becomes a nightmare where Brenda cackles while Johnie boils naked in a cauldron of pea green soup. Because of Marsha’s return and steadfast loyalty, Johnie is able to endure even the most unthinkable. 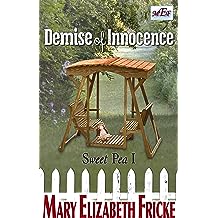 Demise of Innocence: Sweet Pea I Sep 2, 2017
by Mary Elizabeth Fricke
( 2 )
$1.43
Sweet Pea I: The Demise of Innocence (1968-70) At seventeen Johnie is no longer a child but still full of virgin innocence—and defiance. Her final year of high school isn’t exactly a picnic as she endures the untimely deaths of two friends, a third disappears on Prom night, and her boyfriend's primary intent appears to be to claim her virginity. The summer after graduation she encounters her first ‘real’ love and the loss of her virginity to a soldier bound for Viet Nam. By fall, she discovers the world of factory employment. As fate intervenes in every avenue of her life, throughout the harsh winter of 1970, she learns 'growing up' involves a lot more than physical loss of her virginity.

Sweet Pea Trilogy: To one man she gave her virginity; to another, she gave her heart. One, she would mourn. With the other, she would share life's triumph and turmoil. With both, she would endure times of love, and passion and complete happiness as well as times of despair, confusion, and sorrow. One day at a time—each day, building unforgettable memories. 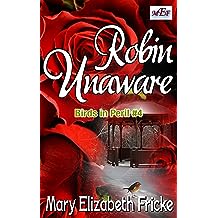 Robin Unaware (Birds in Peril Series) Jan 1, 2016
by Mary Elizabeth Fricke
( 5 )
$1.99
Life is constant change, sometimes planned, sometimes instant and devastating. For Stephanie Harvester-Garrett, life takes an abrupt curve when her husband is killed in a car accident.
Determined to secure a stable home for her three children, Stephanie returns to Missouri to be closer to family and to accept employment in her brother’s law office. A whole new world opens for Stephanie and her three children when they move into a log house owned by Hunt R&C employee, Todd Sellers.
However, the dream of living a peaceful country life is interrupted by unexpected ghosts of the past, and hatred spawned in the name of love. 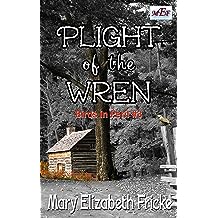 Plight of the Wren (Birds in Peril Series) Aug 15, 2015
by Mary Elizabeth Fricke
( 4 )
$1.99
Susie Wrener’s life became front page news when her abusive husband put her in the hospital and sent himself to jail. Three years later, life has returned to mundane, while Susie struggles to maintain a peaceful loving home for her two children as a single mom. Then she meets Ted Harvester and wins the lottery in the same week…
Ted Harvester leaps at the chance to become Hunt R&C’s in-house attorney; thus, rebuilding the business and relationships Sheldon Humsler destroyed. Ted is on a mission to see Humsler incarcerated for life, but his priorities change when he falls in love with Susie Wrener and her children. They embark on life together in a house with an intriguing past all its own.