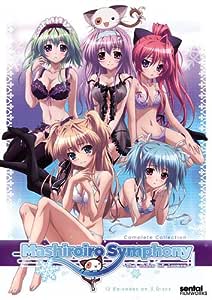 When boys suddenly get into places where they've never been allowed before, some girls tend to get upset. So when the decision is made to merge the elite Yuihime Girls' Private Academy and the coeducational Kagamidai Private Academy, everyone wants to take extra care in bringing the two Privates together. Therefore, rather than just sticking the Kagamida boys into the Yuihime girls all at once, a plan is concocted in which a group of test males will be inserted into the Girls' Private Academy first. Thus it is that poor young Shingo finds himself being thrown as a sacrificial lamb to the lionesses of Yuihime, who aren't exactly waiting for him with open arms. Will Shingo manage to survive the estrogen soaked death pit that is Yuihime? Can the girls learn to be more receptive to the boys? And just how long until something involving panties will cause emotions to flare, sparks to fly and the war between the sexes to explode? It's a desperate battle to turn discord into making sweet music together in MASHIROIRO SYMPHONY ~ The Color of Lovers!

Anime LoverTop Contributor: Manga
5.0 out of 5 stars What is the color of a good show?
Reviewed in the United States on December 12, 2012
Verified Purchase
When problems in a school district affects two schools, a plan is to put into action to integrate the Yuijio and Karabusa schools into one school. However there is a small problem, Karbabusa is a co-ed school while Yuijio is an elite all girls school. So to smooth things over a group of Karabusa students, both male and female, are send over to test the waters for integration. However the girls of Yuijio are not exactly welcoming to the male portion of the group, especially the daughter of the director. Shinjo and his sister are part of this group, and when he realizes that the fight will be hard, he starts to make friends with not only Airi (the daughter), but also the campus student maid, the man hater, and the third year president of the Neco Club (who help out hurt animals and releases them). But as the year proceeds he not only helps integrate the student body, he does not realize that several girls will develop strong feelings for him . Can he truly help make the plan work, and tell the girl he falls for how he feels for her (and survive the fall out that is sure to follow)?

This was an enjoyable series, it had everything you would expect from a romantic comedy, including love, a few real heart wrenching moments, and a lot of soul searching. You will feel for those that fall for Shinjo, even if they did not realize at the time they had fallen for him. While it is a TV-14 rating, this show does have a few short nude scenes and one kissing scene, but definately nothing adult. In fact the nude moments add to the humor of the story. The characters were well written and the story was amazing. In short this is a must have for anyone.
Read more
13 people found this helpful
Helpful
Comment Report abuse

D. Aiken
5.0 out of 5 stars Mashiroiro Symphony
Reviewed in the United States on November 8, 2012
Verified Purchase
Disregard the underwear art on the back or,if you got the other cover with a girl starting to hoist her skirt,be advised,this series has none of that;the cover and the large figures on the back of the case do not exist in that pose.There are three explicit nude scences,two involve the quirky sister.This series is not an ecchi/panty fest. In fact,I don't recall any panties except one of about two frames in length. This series is so delightful that any more ecchi/panties would probably sour it.
When the initial cadre' of boys arrive on the hereto all-girl academy,there are as many different reactions to them as there are girls,most of these girls simply have not been closley associated with members of the opposite sex that are also in thier same age group.
How or if they overcome the tensions of changes in thier comfort zones is what this series is about and it is one of the best drawn,acted and colorful series you are likely to find anywhere.
It is not a harem situation but serious relationships are formed and more than one heart is broken. This is such a delightful and touching series that the two short,and completley misguided scenes when the 16-year-old sister suddenly wants to take a bath with the 17 year-old brother are so far out of the plot that one has to wonder what someone was thinking putting that nonsense in. He wants no part of it and the whole scene is so far out of the character of the series as to be a possible distraction but,if you must be distracted,little sister ain't so little anymore. Just be aware of the suddeness of this bizare and out of step behavior so you will not be so distracted from the beauty of the rest of the series.
There is real heartbreak for one of the girls and it is so painful that you really have sympathy for her.
The highest of recommendations.
Read more
5 people found this helpful
Helpful
Comment Report abuse

Bruce Brakebill
5.0 out of 5 stars No problems with the seller will shop with them again.
Reviewed in the United States on June 4, 2019
Verified Purchase
A good series but they didn’t put a Christmas special and the results of the petition even though they did stay together at the end there should have been another season where she graduated and he moved on into his senior year etc.
Read more
Helpful
Comment Report abuse

Sesil
4.0 out of 5 stars Uncensored and worth buying.
Reviewed in the United States on September 7, 2015
Verified Purchase
Very good series. Is a little boring at times but overall gives new definition to the harem genre. Also, this version is uncensored. I watched the series 3 times censored on Crunchyroll, so it being uncensored here makes it much better and definitely worth the buy, seeing how cheap it is. Definitely check this series out.
Read more
Helpful
Comment Report abuse

Victor
5.0 out of 5 stars I give 100%
Reviewed in the United States on December 21, 2016
Verified Purchase
I happy with this anime I liked
Read more
Helpful
Comment Report abuse

Robert Daniel Mounts
5.0 out of 5 stars Five Stars
Reviewed in the United States on February 11, 2018
Verified Purchase
The storyline for the anime is beautiful, it keeps you wanting to see the end
Read more
Helpful
Comment Report abuse

bozeman1941
5.0 out of 5 stars Wonderful!
Reviewed in the United Kingdom on May 2, 2013
Verified Purchase
I just finished watching this series a few nights ago, and I thoroughly enjoyed every minute of it!

The title (which translates to 'Pure White Symphony: Love is pure white') centres around High School student Shingo Uryū, who is kind and compassionate, and hates to see anyone hurting or left out, whose school, the co-ed Kagamidai Private Academy, in the fictional town of Kagamidai, is being forced (due to falling numbers) to merge with another local high school, the posh girls academy Yuihime Girls' Private Academy (which is also known by the nickname Yuijo). Shingo is chosen to be one of the 'test' class from Kagamidai, known as 2-T, whose task it is to see how the integration would work in real life. Needless to say, the girls of the Yuijo are not best pleased at having their all-girl world invaded by those disgusting creatures known as 'boys', and many, including the student body president Airi Sena, who hates all boys, are initially very much opposed. The other female characters are Sakuno Uryū, Shingo's step-sister, who is cute, but has no sense of direction, and gets lost easily, even when just coming home from the shops! Then there is half-English 'stray-maid' Angelina Nanatsu Sewell, known to all as 'Ange', who dresses as a maid, and wants to be in service to a kind master (and of course, Shingo fits the bill nicely!); next is Miu Amaha, president of the Nuko Club, which looks after injured animals and returns them to the wild once recovered; she is cute and kind, and quickly begins to fall for Shingo too. Sana Inui, also from the Nuko Club, has a slightly more than healthy interest in Miu, and regularly batters Shingo for getting to close to her; she is insanely jealous of his growing affection for Miu, and does all she can to keep them apart. However, she eventually starts to feel differently about him, when he resolutely continues to be kind to her (and indeed all the others too) in spite of her best efforts to chase him off. The only other significant male character is Hayata Mukunashi, Shingo's friend and classmate; he is Kagamidai Academy's student council president too.

The story follows the girls growing affection for Shingo, and the daily shenanigans which go on in the school, and the various relationships that develop. Overall, it is a great story; heart-warming, affectionate, cute, funny, and even quite moving at times; it is a really good watch, and well worth the reasonable asking price. Picture and sound are fine, although Amazon have (yet again!) incorrectly marked the aspect ratio as 4:3; it is not, it is 16:9. There is also an 'extras' DVD included, which has various additional shorts, plus character songs, and a cute 15-minute piece in which a fully 3D-rendered version of Airi Sena (as opposed to the more normal 2D characters) talks to Shingo; that was really great!

I enjoyed this series more than a lot of other, more highly-regarded, animes I have seen lately; just get it - you won't be sorry! Highly recommended.
Read more
One person found this helpful
Report abuse