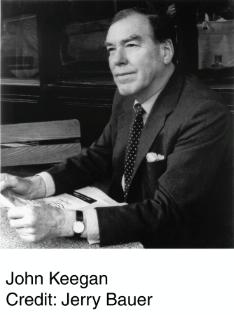 Four chapters on "heroic" military leadership (in the broadest sense of the word)Alexander the Great, Wellington, U.S. Grant and Hitlerlead up to what PW called a "masterful closing argument warning that in the nuclear age heroic leadership of any style would lead to the destruction of civilization." Photos.
Copyright 1988 Reed Business Information, Inc.

Sir John Desmond Patrick Keegan (1934–2012), was one of the most distinguished contemporary military historians and was for many years the senior lecturer at Sandhurst (the British Royal Military Academy) and the defense editor of the Daily Telegraph (London). Keegan was the author of numerous books including The Face of Battle, The Mask of Command, The Price of Admiralty, Six Armies in Normandy, and The Second World War, and was a fellow at the Royal Society of Literature.

Richard H.
5.0 out of 5 stars Wow!
Reviewed in the United States on May 25, 2020
Verified Purchase
All in all, this is the best book of analytical military history I've ever read.

Keegan's sentence structure is convoluted and painful. He's clearly not a devotee of Strunk and White. But his paragraphs have bones, his chapters are magical storytelling, and the arc, depth, and insight of the book are jaw dropping.

It's a tough read, but worthy of every hour that you'll put into it.

P.S. I found this book to be "timeless" in comparison to The Face of Battle, which had far too much regimental minutia for me.

Cody Carlson
5.0 out of 5 stars Four Commanders and their Methods
Reviewed in the United States on June 15, 2010
Verified Purchase
John Keegan's penetrating look at four military commanders, "The Mask of Command" is a wonderful examination of war, strategy, and generalship. One of our finest military historians, Keegan brilliantly examines the role leadership has historically played in ancient and modern warfare. His case studies include Alexander the Great, whose daring, even reckless disregard for danger earned him the respect and devotion of his Macedonian force and its Greek 'allies'. Keegan's careful breakdown of Alexander's force, the strategies it employed, and Alexander's overall flamboyance on the battlefield contribute to a greater understanding of the period and military realities of the day. The second study, the Duke of Wellington, offers a more detached, though still fully engaged mind. Keegan describes Wellington as the anti-hero, in contrast to Alexander's heroics. A British aristocrat well aware of his station, Wellington employed all of his resources and cunning to win, but did so without Alexander's dramatics. Third, Keegan explores U.S. Grant during the US Civil War. Grant is the democratic soldier, committed to the republican ideal. He is engaged in prosecuting the war and always keenly aware that war itself lifted him out of obscurity and placed him in the critical leadership role. Finally, Keegan explores the twisted, though occasionally militarily brilliant mind of Adolf Hitler. Hitler commanded far behind the lines and continually inserted himself further and further down the chain of command. His justification for his own military judgment was his experience in the trenches of World War I. Hitler's growing disconnect with military reality as the war progressed spelled ultimate doom for Germany.

Concise and well written, "The Mask of Command" offers fascinating insights into military leadership over the ages. Keegan is always worth reading and this work is one of his best.

Y. Sageev
5.0 out of 5 stars Engrossing and flawless
Reviewed in the United States on June 2, 2006
Verified Purchase
Prior to the publication of "The Face of Battle", much of military history focused on leaders and not on the led, set pieces and "macro" developments. With "The Mask of Command", Keegan returns from the raw shellshock of combat and furnishes four accounts of famous military leaders. However, his focus is not on strategic or tactical decisions, but on how these men led, the theatre and persona that these leaders cultivated to provide the trust and moral fiber which motivated their men. This is what Keegan means by "the mask" -- the image, the spirit, the incarnation of what subordinates needed to believe in order to fight. It is in some sense combative to claim that this persona is a "mask" -- that is, an artifice contrived to motivate and not strictly who these leaders "were". To some extent, it is impossible to know what any historical figure actually "was", or simply what we even "are", but in any event, these particular leaders had very interesting masks and Keegan does a superb job in each account.

Clearly, if a leader is to be effective he must have the respect and trust of his men. The problem is that the mechanisms for gaining this respect are either fraught with personal peril, require the embodiment of a cause which is rarely stain-free, or rest upon a non-trivial ideological framework. The simplest starting point, then, is to answer Keegan's question, "In front: always, sometimes, or never". "In front" always has the advantage of pressing home the point to the men that the leader is bold, unafraid to assume the same risks as his men for a purpose in which he must clearly believe. "In front" also has the disadvantage of placing the leader in mortal danger. So a complication arises, namely, that good leaders are rare and precious, that losing them does a belligerent no good, but that to eschew personal risk is to court mistrust. Alexander, Keegan's first case study, chose "in front". He was able to do so in part because early warfare did not have the lethality of later warfare -- arrows rarely hit their mark and skill at arms could tell in the local heat of combat. Alexander could thus afford it, but he too felt it incumbent to act more and more heroically, i.e., to take increasingly greater risks the more he demanded of his men, finally risking too much and losing his life. Wellington opted for "sometimes", rushing about from regiment to regiment at Waterloo, courting stray musket balls and grapeshot at every turn, exhorting and directing at all times. Still, he did not lead from the front, which was probably a wise decision when impersonal bullets could kill men in swaths. Grant more-or-less chose "never", as did Hitler.

The issue then arises for all leaders, but especially for those leaders who chose "never", to find other means of gaining trust and belief. Alexander would engage in dramatic antics, spending days in his tent in peevish anticipation of apology, and would don fabulous armor for engagements. Oration and rhetoric were vital to his success as he attempted to hearten at least a portion of his men. Wellington cultivated the persona of the stoic gentleman warrior, an iron will of perfection, fair to all but intolerant of sloppiness. Grant cultivated the image of being "one of the boys" -- surrounding himself with home-town friends, spurring his men by honestly showing them his hangdog vulnerability, and by relying on his men's belief in the justice of the Union cause - they were, after all, citizen-soldiers, volunteers, men of conviction.

Hitler's leadership required the constant bolstering of a seductive ideology, endless infusions of propaganda. Belief in his command was cemented by the ceaseless exhortations of Goebbels. Like the uncreative and largely ineffective generals of WWI, Hitler hid in secret bunkers while his men died far away. That Hitler could get away with it for so long and so successfully was largely due to the dramatic improvements in communications, but also through the constant retelling of the Fuhrer's heroism in WWI. Ultimately, Hitler was not a hero, but a false god whose command withered with the monstrous dream of the Third Reich and his distance from the realities of the front. Here, Keegan does a particularly fine job detailing Hitler's neurotic infantilism, his growing separation from reality, his insecure sense of isolation, and his final ignominious demise.

"The Mask of Command" is readable, compelling, and perhaps the most flawless of all of Keegan's histories. Quality, not quantity is the motto here. A brilliant and absorbing treatise.

irishpropheticart
5.0 out of 5 stars Awesome book by an awesome man
Reviewed in the United Kingdom on February 8, 2016
Verified Purchase
I was fortunate to have heard Dr.Keegan speak once and talk to him for several hours afterwards.What a professor of history he was.Sadly the world lost him just recently,but you did not loss him as his books are still here.This book deals with the mind of having to lead in the strategic sense more over the tactic sense like say 'Band of Brothers' Major Winter's.
Read more
3 people found this helpful
Report abuse

Lewis Tuff
4.0 out of 5 stars Decent Enough
Reviewed in the United Kingdom on October 1, 2019
Verified Purchase
I only bought this for the analysis of Hitler's military leadership but found the other chapters interesting. The book is well written. Sadly the author comes to a very typical, silly conclusion as to the wartime leadership of the Führer, offering nothing but repeated tropes. The detailed information about Hitler's daily activites during the war is excellent however.
Read more
Report abuse

Ajinkya Bawase
1.0 out of 5 stars Worst Copy provided by both uRead & Global Book Store
Reviewed in India on March 26, 2019
Verified Purchase
This book is one of the best books on Military history. Unfortunately both sellers named above provided me very cheap quality of this book. uRead provided me a copy which was clearly a xerox or cheaply printed copy. Global book store provided a copy which was not kept properly & totally different from what was displayed. Pages are completely yellow. Very poor and cheap behavior by both the sellers.
Read more
One person found this helpful
Report abuse
See all reviews