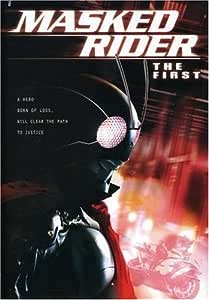 Takeshi Hongo, a man of extraordinarily keen intellect, has his promising future snuffed out by an evil secret society known as Shocker. They create experimental cyborgs in an attempt to take over the world. Eventually, Hongo is turned into a cyborg  Masked Rider 1  but soon regains his self-awareness. Realizing that he is now controlled by evil, Hongo escapes. Shocker views Hongo as a traitor and dispatches a new, nearly identical cyborg  Masked Rider 2  to destroy him. But they're too evenly matched and their duel ends in a draw. Growing impatient, Shocker sends two new cyborgs  Snake and Cobra  to kill them both. KAMEN RIDER THE FIRST is a new adaptation of the popular original manga created by Shotaro Ishinomori.

Yattaman X-79
4.0 out of 5 stars RIDER KICK!!!!!!!
Reviewed in the United States on September 15, 2013
Verified Purchase
I liked this update of the classic 1971 tokusatsu series Masked Rider ,although I thought that it could have had more fight scenes. At least another half hour and the director of the movie, could have had the Shocker foot soldiers. First attack Masked Riders 1 and 2, with machine guns and have our 2 heroes. Either dodge the bullets or have them bounce off of their armor. Besides the way that their armor looks , it looks like it's bulletproof anyway right? If I was creating cyborg soldiers, for my own secret organization. They wouldn't just have to be strong, fast, and, agile. They would also have to have bulletproof, yet lightweight armor to protect themselves. As for the soundtrack Bright our Future , that song was okay . But it would have been much better, if they have had Animetal's version. Of the Masked Rider theme playing, especially during the fight scenes. And of course more special effects especially when either, Masked Rider 1 or 2 does their legendary finishing move the Rider Kick. It would have been cool if they would had some kind of blazing energy. Surrounding whatever foot that they're, going to do the Rider Kick. With and also have them shout out Rider Kick , when they perform that move. Also I'm still wondering when Tokyo Shock is going to release Masked Rider the Next here in America, cause they've already should have released it here !!!!!!
Read more
2 people found this helpful
Helpful
Comment Report abuse

KEVIN L. SMITH
5.0 out of 5 stars The Origin Retold and a fans lament
Reviewed in the United States on December 12, 2013
Verified Purchase
I love Kamen Rider, but sadly not much of this 42 year old franchise has made it to the US.

Aside from the Ryuki's Dragon Knight and the abysmal Masked Rider adaptations and Generation Kikiada's DVD release of V3, there is no way to obtain one of Japan's greatest superhero franchises here. (unless you do it the sort-of-illegal way by torrenting or streaming fansubs. Which in most cases is your ONLY option aside from horribly subbed Hong Kong releases from shady dealers).

I'm glad that the movie that re-imagined the origin of the original Kamen Rider did get a release as it tells the bare bones of what Kamen Rider is. Dude with kung fu and superpowers activated by a belt and rides a motorcycle, kicks the butt of terrorists/aliens monsters/cyborgs who want to conquer/destroy the Earth.

The message the franchise has had throughout the course of its history is having the courage to face against impossible odds and that even the unlikeliest of people can make a difference for the greater good.

I only wish another company would buy the distribution rights so we USA KR fans could get more releases. I really want Kamen Rider Double on DVD or Blu-ray on my shelf with official English subs...And Kuuga..and Agito...and...well you get the idea.

Marc
5.0 out of 5 stars Henshin!
Reviewed in the United States on January 23, 2012
Verified Purchase
Having never seen any of the Japanese Kamen Rider shows, this was a good buy. I first became aware of Kamen Rider via Saban's Masked Rider, though I was not aware at the time that it was based on anything. ( I was fifteen at the time and had no real clue about live action imports of anything from Japan beyond the Godzilla film series)

However I later learned of the Japanese Kamen Rider concept when I saw that Kamen Rider: Dragon Knight (which still has yet to have a DVD release, sadly), listed in its opening credits that the show was based on a show called Kamen Rider created by a man named Shotaro Ishinomori. Since I liked Dragon Knight I recently began researching the concept on wikipedia and TVTropes and a few fan sites. (This research has led me to create my own novel series inspired by the concept) I learned of Masked Rider The First via Wikipedia, and while I was leery of the name, expecting it to somehow be related to Saban's adaptation, I was more than pleasantly surprised.

From all I have learned, The First is an attempt at a condensed retelling of a 1971 show by the name Kamen Rider (literally translated, it becomes Masked Rider, as Kamen is the word for Mask and Masked in Japan), which revolves around a man named Takeshi Hongo, who is abducted by a terrorist organization called Shocker (which is apparently actually an acronym for Sacred Hegemony Of Cycle Kindred Evolutional Realm. Yeah, I don't get it either.) and transformed into a super powerful cyborg initially called Hopper since his armored mask is designed to look like a grasshopper, and brainwashed into becoming a willing servant of Shocker. He breaks free of his mind control and begins to oppose Shocker, using the powers they themselves gave him. This prompts the creation of a second Hopper, Hayato Ichimonji, who is betrayed by and in turn betrays Shocker outright.

These two characters, though never explicitly called Kamen Riders, proceed to battle Shocker's forces over the last half hour of the movie in an attempt to save a girl who is the love interest of both men, and who has seemingly gained an affection for Hopper/Rider 1. Ironically, the second Hopper, Ichimonji, was her fiance until he was apparently killed and later resurrected by Shocker as Hopper/Rider 2.

If the movie is this good (and it is. The ending song, Bright! Our Future is all kinds of awesome even if I don't understand a word of it since the song wasn't subtitled) the series must have been something else for being a show made in 1971. Well worth the money if you can find a copy.
Read more
5 people found this helpful
Helpful
Comment Report abuse
See all reviews

Martin
5.0 out of 5 stars Masked Rider
Reviewed in the United Kingdom on May 14, 2020
Verified Purchase
I use to love watching the Masked Rider when I was a kid in the mid 1990's. I recorded some episodes because I loved it so much.
Read more
Report abuse

Thomas Barrett
5.0 out of 5 stars preview review
Reviewed in the United Kingdom on December 28, 2014
Verified Purchase
Hi I'm really looking foward to get this DVD as i thought these old tv programs wasn't ever released on DVD and can't wait to watch it i have seen this on the internet ITS AWESOME AND I LOVE IT looking foward to getting it thanks
Read more
Report abuse

MICHAEL HUNT
5.0 out of 5 stars Five Stars
Reviewed in the United Kingdom on June 7, 2015
Verified Purchase
Great, for time it took to get to me was great
Read more
Report abuse
See all reviews