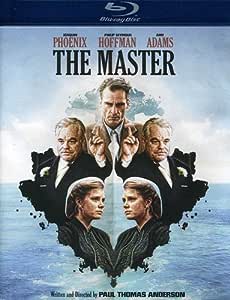 A striking portrait of drifters and seekers in post-World War II America, Paul Thomas Anderson’s THE MASTER unfolds the journey of a naval veteran (Joaquin Phoenix) who arrives home from war unsettled and uncertain of his future–until he is tantalized by The Cause and its charismatic leader (Philip Seymour Hoffman).

4.5 out of 5 stars
4.5 out of 5
192 customer ratings
How does Amazon calculate star ratings?
Amazon calculates a product’s star ratings based on a machine learned model instead of a raw data average. The model takes into account factors including the age of a rating, whether the ratings are from verified purchasers, and factors that establish reviewer trustworthiness.
Top reviews

Matthew D'SouzaTop Contributor: Batman
TOP 500 REVIEWER
5.0 out of 5 stars Challenging, Yet Fascinating Film
Reviewed in the United States on June 13, 2019
Verified Purchase
I could not look away from the screen.

Paul Thomas Anderson's psychological drama The Master (2012) is a strange, yet engrossing film. Anderson's masterful direction with beautifully filmed cinematography make ever shot of The Master a stunning work of art. Anderson's script forces you to confront a WWII veteran's struggle with PTSD, while we witness the rise of a cult leader trying to cure him. I do not think I even fully understood The Master, but I appreciate it. I will surely be thinking of it for years to come.

The Master recreates America in 1950 with a keen eye for detail, but the real thrill is the performances. Joaquin Phoenix transforms himself into a lithe monster of PTSD stricken madness and raging alcoholic insanity. His pleasant moments are interrupted by sheer force of will. Phoenix' breakdown during his non-blinking processing is an absolute powerhouse performance in The Master.

Likewise, Philip Seymour Hoffman gives an outstanding acting role as the constantly controlling and calm cult leader, whose tendency towards anger is unleashed once questioned. Hoffman is resolute and charming in his choices, while also finding a fury that is tremendous for The Master. One of Hoffman's best roles for sure.

I love Amy Adams as Hoffman's cult wife. Her sweet demeanor leads to a forceful personality. Like Hoffman's manipulations and lies, Adams finds strength in her character's blunt truth and commanding presence.

This story may be hard to follow, but The Master is so rewarding to patient viewers. Anderson's slow burn pace, with precise close-ups and breathtaking wide shots lead to all manner of emotions, stress, anger, sadness, and joy. The Master is wholly encompassing and reaches your limits. I would not say The Master is for everyone, but those that will enjoy this film, will undoubtedly adore it forever. With long takes of Joaquin Phoenix ranting, Philip Seymour Hoffman philosophizing, and Amy Adams scolding, The Master is unlike any other film. It dives into the problems of toxic masculinity as did Anderson's other films like Magnolia, There Will Be Blood, or Phantom Thread, but The Master feels like it sympathizes with these men much more.

Jonny Greenwood's score is mesmerizing, if scarce. Mihai Malamaire's cinematography is gorgeous and poignant. It forces you into Phoenix' perspective to all his madness. Leslie Jones and Peter McNulty's editing is wild and erratic, yet serene in its execution. It disorients on purpose and focuses in at precise moments of clarity.

In conclusion, though immensely dense, The Master is a triumph of masterful direction, creative filmmaking, challenging subjects, and brilliant performances.

KG
4.0 out of 5 stars A challenging, difficult, flawed, but ultimately rewarding film
Reviewed in the United States on September 22, 2012
Verified Purchase
Perhaps our most fascinating American director continues his evolution in a fascinating and frustrating film that I view with a mix of feelings.
It could well be argued that this is a step backwards from "There Will Be Blood", and certainly, after 2 viewings, this lacks, for me the cohesive
power of the best of Anderson's earlier work.

Some will just hate it. The pace is slow, the message often oblique, there's no catharsis, no easy answers. Just two riveting characters being
given riveting performances by two of our best actors, bouncing off each other, slowly giving us fragmentary glimpses into their souls.
Philip Seymour Hoffman plays the Master, a charismatic charlatan quasi-religious leader who desperately needs adulation, and seems to
have long ago lost track of how much of what he says he really believes, and how much he's just making up as he goes along. Joaquin
Phoenix plays Quell, an angry, possibly crazy young man suffering from what we'd probably now call PSTD after coming out of WW II.
He seems to need a father figure as desperately as Hoffman's Lancaster Dodd needs to be adored as a father, so these two are drawn
together, and yet repelled as they both can see the damaged souls under the other's surface, and in the eyes of the other see the reflection
of their own wounds. So begins a non carnal love story between these two characters. Indeed, to me the film seems to be about love and how
the American male has such a hard time asking for it, accepting it, giving it or taking it in any direct manner, so we start religions or become
acolytes ·(or become porn stars or heartless oil tycoons). The only thing these two polar opposites seem to have in common is that neither
of them can communicate without manipulation, or without burying their real meaning. And when they try to break through that, it inevitably
pushes them apart.

It's the tragedy of the American male, a theme Anderson has explored repeatedly (along with fathers and sons);we can't cope with our feelings,
our vulnerability so we slowly pervert our need for love into quests for power, or violence, adulation, or domination or submissiveness. Whether
it's "Hard 8" or "Boogie Nights" or "There Will Be Blood", Anderson's men are doomed by trying to be the men they think they have to be to
survive, thus distorting their perceptions and their hearts.

But there is a fuzziness here. One of Anderson's great strength as a film-maker has been his ability to make us sharply understand what's going
on viscerally, even if at moments it's hard to get on a literal level. But, at least for me, there were too many moments when I felt lost in the bad
way, not in a mystery, but a muddle. There are very interesting scenes, but in retrospect I'm not sure what some of them added to the story. I
expected a second viewing to reveal greater depths, but for me instead it made the film feel a little more shallow, as if maybe some of the leaps
in logic didn't actually have a point, but were just slightly unfocused storytelling.

I would still urge anyone interested in film-making or acting to see it. There is some spectacular work here, dramatically and visually. But, for
once, the sum of an Anderson film seems like less, not more than the sum of it's parts.
Read more
9 people found this helpful
Helpful
Comment Report abuse

John Blegen
5.0 out of 5 stars Best movie I’ve ever seen
Reviewed in the United States on June 11, 2019
Verified Purchase
This movie is brilliant and really showcases P.T. Anderson at the top of his game. I’ve read somewhere that he said this was his ever film he’d ever directed, and it really shows. Pheonix’s character is like an embodiment of recklessness, the death drive that Freud wrote so much about and which has been such a predominant force in modern story telling. For him to fall into the snares of a Scientology-like cult, in the midst of its meteoric rise, is brilliantly symbolic. Still, PT Anderson never lets his film stray into cheesy territory. You can never expect where the characters will go next, and because if that, the film feels so alive, so responsive to chaos like a living, breathing phenomenon.
Read more
One person found this helpful
Helpful
Comment Report abuse

Ian Shirley
5.0 out of 5 stars I fall on the side of masterful when it comes to this polarizing film
Reviewed in the United States on March 4, 2014
Verified Purchase
Couldn't be happier to experience this film again at home. I can understand the reviews declaring it polarizing, but I stand firmly on one end of that polarization. Paul Thomas Anderson delievers another masterpiece showing that his visual storytelling has never faultered and his direction of some of the most powerful and compelling actors of our time is both overbearing and seemingly invisible, and the two couldn't be mixed better. You are never aware you are watching a fabrication. Everything in this film comes and alive and feels organic, which just adds to how terrifying the content of the story is and how it will haunt you even after the credits roll. With the late Phillip Seymour Hoffman giving arguably the strongest performance of his life, it will be something he will be remembered for and his friends and family should be ever proud of this legacy and collaboration he left behind.
Read more
9 people found this helpful
Helpful
Comment Report abuse

Page 1 of 1 Start overPage 1 of 1
This shopping feature will continue to load items when the Enter key is pressed. In order to navigate out of this carousel please use your heading shortcut key to navigate to the next or previous heading.
Back
Next
Pages with related products. See and discover other items: amy adams movies, the weinstein company