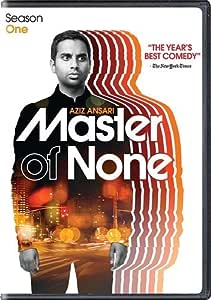 Master of None: Season One

Based on the comedic viewpoints of Aziz Ansari, Master of None follows the personal and professional life of Dev, a 30-year-old actor in New York who has trouble deciding what he wants to eat, much less the pathway for the rest of his life. Ambitious, funny, cinematic, and both sweeping in scope and intensely personal, Dev's story takes him through subjects as diverse as the plight of the elderly, the immigrant experience, and how to find the most delicious pasta for dinner.

3.4 out of 5 stars
3.4 out of 5
14 customer ratings
How does Amazon calculate star ratings?
Amazon calculates a product’s star ratings based on a machine learned model instead of a raw data average. The model takes into account factors including the age of a rating, whether the ratings are from verified purchasers, and factors that establish reviewer trustworthiness.
Top Reviews

Pat McCann
2.0 out of 5 stars Didn't Like this Show
Reviewed in the United States on September 18, 2018
Verified Purchase
I like Aziz Ansari, but I didn't like this show. I didn't think it was funny or had any good characters.
Read more
Helpful
Comment Report abuse

Robert W.
3.0 out of 5 stars Three Stars
Reviewed in the United States on July 21, 2017
Verified Purchase
Maybe it's just my copy by the second show on the DVD has no audio? CC works.
Read more
Helpful
Comment Report abuse

carol irvin
5.0 out of 5 stars This couldn't be timelier. It is as timely for 2016-2017 as Seinfeld was for the '90s.
Reviewed in the United States on February 10, 2017
I've seen his comedy stand up on a few DVDs. That is very good but this series is better. With this series he had much more range to give the character. He plays an Indian American who is trying to make it in show biz. As he does so you meet his family and friends. The characters he focuses the most attention on are, like him, hybrid Americans. His parents were from India and an arranged marriage and he leaves that intact for the show. Likewise his friends, one of whom is Asian, are American and it was their parents who moved here. These are all a bright bunch of people. Ansari's father, in both the show and real life, is a doctor.

There is attention given to the issues one faces when trying to get employment. He and his friends are all before the camera, not behind it, so they run headlong into what parts are believable for Indians, Chinese, etc., He also meets some interesting show business types along the way. Some of them are impossible people and some are actually helpful and good friends.

On its face, this has the same premise as "Seinfeld," but they are not very similar apart from the premise. Seinfeld was funny because it focused on this small group of incredibly self absorbed people in New York in their 30s. The people in this show are much more focused on trying to assimilate into becoming full Americans (even though they were born here). On the way to doing so they have to cope with a family who came from elsewhere and potential mates who are (usually) white Americans.

Ada Ardor
4.0 out of 5 stars Not what I expected.
Reviewed in the United States on January 29, 2017
Had to watch the show after Alan Yang's amazing Emmy speech.

Really enjoyed the show. Not exactly what I thought. Aziz Ansari, who usually comes off as acerbic and even off-putting in his comedy, is warm, tender and humorous. He's a wannabe actor, who struck some success in commercials, and he navigates through life and love.

I loved every second of the first episode except the first fifteen minutes featuring Rachel/ Noël Wells. Not her fault. Just not a good note to start. I found it awkward, and I wasn't sure where this show was going. But thank goodness, there was more. I found the pilot trying with children - ugh, but the show like an onion - more and more depth. Love, love the final five minutes - and especially the music.

I was wrong. The show had a theme, and I had miscalculated, and I'm glad to be proven wrong. Rachel/Noël Wells had a purpose. Poor Noël Wells/Rachel didn't have enough to do during that first episode. Nothing of her personality could be garnered from the first episode.

Liked Dev Shah/Aziz Ansari's friends. His best friend is played by Eric Wareheim, who towers over Aziz's Dev Shaw, and always seems to be there. But as endearing as Eric Wareheim/Arnold Baumheiser is, he needs more to do. He's not quirky enough to be funny, and not smart enough to be taken seriously. Eric Wareheim will be a standout; he just hasn't found his place. The other characters are just fine; in fact, I wish to see more of them. Aziz's real life father is a standout, but his mother is a robot. (Sorry but true.)

Yes
5.0 out of 5 stars Absolutely brilliant
Reviewed in the United States on May 25, 2017
Absolutely brilliant from head to toe. This outstanding series masters story with comedy. It speaks to the modern adult. A truly unique and moving series.
Read more
3 people found this helpful
Helpful
Comment Report abuse

Tiera Wright
5.0 out of 5 stars Fantastic Show
Reviewed in the United States on January 31, 2017
This show to me, is Aziz at his best. Master of None is incredibly funny and authentic. It's a great look at modern love, life and family. A great snapshot into the mind of the hilarious writers. From the writers to the awesome cast, this was a great start for an amazing series.
Read more
4 people found this helpful
Helpful
Comment Report abuse
See all reviews from the United States
Pages with related products. See and discover other items: aziz ansari, 2017 Comedy Movies on DVD