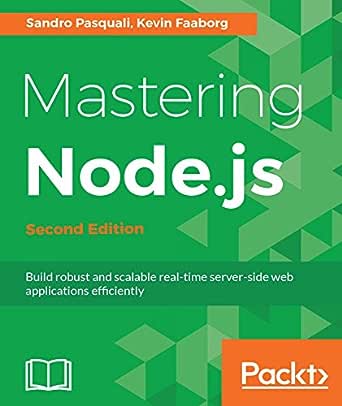 Flip to back Flip to front
Audible Sample Playing... Paused   You are listening to a sample of the Audible narration for this Kindle book.
Learn more
ISBN-13: 978-1785888960
ISBN-10: 178588896X
Why is ISBN important?
ISBN
This bar-code number lets you verify that you're getting exactly the right version or edition of a book. The 13-digit and 10-digit formats both work.

Node.js is a modern development environment that enables developers to write server- and client-side code with JavaScript, thus becoming a popular choice among developers.

This book covers the features of Node that are especially helpful to developers creating highly concurrent real-time applications. It takes you on a tour of Node's innovative event non-blocking design, showing you how to build professional applications. This edition has been updated to cover the latest features of Node 9 and ES6. All code examples and demo applications have been completely rewritten using the latest techniques, introducing Promises, functional programming, async/await, and other cutting-edge patterns for writing JavaScript code. Learn how to use microservices to simplify the design and composition of distributed systems. From building serverless cloud functions to native C plugins, from chatbots to massively scalable SMS-driven applications, you'll be prepared for building the next generation of distributed software.

By the end of this book, you'll be building better Node applications more quickly, with less code and more power, and know how to run them at scale in production environments.

What you will learn

This book is targeted at JavaScript developers who want to take an in-depth look at the latest Node.js framework to create faster, scalable, real-time backend applications. Basic JavaScript programming knowledge - and also some previous Node.js development experience - are mandatory to get the best out of this book

Sandro Pasquali formed a technology company named Simple in 1997, that sold the world's first JavaScript-based application development framework and was awarded several patents for deployment and advertising technologies that anticipated the future of Internet-based software. Node represents, for him, the natural next step in the inexorable march towards the day when JavaScript powers nearly every level of software development.

Sandro has led the design of enterprise-grade applications for some of the largest companies in the world, including Nintendo, Major League Baseball, Bang and Olufsen, LimeWire, AppNexus, Conde Nast, and others. He has displayed interactive media exhibits during the Venice Biennial, won design awards, built knowledge management tools for research institutes and schools, and started and run several start-ups. Always seeking new ways to blend design excellence and technical innovation, he has made significant contributions across all levels of software architecture, from data management and storage tools to innovative user interfaces and frameworks.

He is the author of Deploying Node.js, also by Packt Publishing, which aims to help developers get their work in front of others.

Sandro runs a software development company in New York and trains corporate development teams interested in using Node and JavaScript to improve their products. He spends the rest of his time entertaining his beautiful daughter, and his wife.

Kevin Faaborg is a professional software developer and avid software hobbyist. At Harvard, he learned C programming from visiting professor Brian Kernighan. He witnessed and contributed to how digital technology has shaped music distribution, working first at MTV Networks, then Lime Wire LLC, and now Spotify AB, where he designed and started the patent program.

3.8 out of 5 stars
3.8 out of 5
16 global ratings
How are ratings calculated?
To calculate the overall star rating and percentage breakdown by star, we don’t use a simple average. Instead, our system considers things like how recent a review is and if the reviewer bought the item on Amazon. It also analyzes reviews to verify trustworthiness.
Top reviews

- First: It doesn't go all the way with examples. I had to download the code. But I think when you are following a way of thinking it's best to show you all the way, not just part of it. Because if I am lost I can turn back and start over. Which was not possible in several examples.

- Second: The use of paid examples. I don't have accounts in amazon, twillio, or digital ocean, which makes the examples provided hard to follow. As I said previosly in the first point, I would prefer to follow it all through.

But that is just my opinion. Besides that, I recommend it very much. Very rich and the autor show his incredible mastery of Node.
If you want to improve your knowlodge in Node... go for it buying it !

gzelenak36
4.0 out of 5 stars Good for node.js developers who just started with Node.js
Reviewed in the United States on December 16, 2019
Verified Purchase
I liked topic about modules it gave me plus info though other JS articles describe the theme very well.
I found this book very useful.
Read more
Helpful
Report abuse

Amazon Customer
3.0 out of 5 stars Not so great
Reviewed in the United States on September 1, 2018
Verified Purchase
The way things are explained is absolutely awful, which really sucks because the topics presented are great.
Read more
Helpful
Report abuse

Cheung Wai Lok
5.0 out of 5 stars I keep it as my nodejs reference book
Reviewed in the United States on October 10, 2018
Verified Purchase
It seems to be the best nodejs book i have ever discovered
Read more
Helpful
Report abuse

Franco Embarcadero
1.0 out of 5 stars Trash
Reviewed in the United States on July 22, 2018
Verified Purchase
Trash. Save your $$.

No diagrams, half and half code where rest of a given test app is a github download and that disrupts continuity. The descriptions of the APIs feels cheap and copied out of Node.js site. So far the reference to sink Node.js to full understanding is 'Node.js The Right Way'.

I can't explain why Packt Publishing books feel rushed, lacking diagrams and are far far away from the league of books from Addison-Wesley, Manning or even O'Reilly.
Read more
2 people found this helpful
Helpful
Report abuse

I will also note that this Packt title is written damn well and flows properly which is a requirement for my expectations at this point.
Read more
7 people found this helpful
Helpful
Report abuse

Darrel O'Pry
5.0 out of 5 stars Surprisingly rich in detail, much more than your usual mastering a programming language book.
Reviewed in the United States on February 1, 2018
This in depth book on Node.js 9.x provides a takes a deep dive into the history, internals, use cases, and API's of Node.KS. More importantly, the updated edition adds insight into the new features of 9.x such as async/await, gives an excellent overview of micro-services architecture, walks through working with Kubernetes locally to speed up development and prepare for production deployments, and takes a run at debugging and testing. This is a great read for new Node.JS developers, and experienced developers looking to get up to speed with Node 9.x and current best practices.
Read more
3 people found this helpful
Helpful
Report abuse
See all reviews