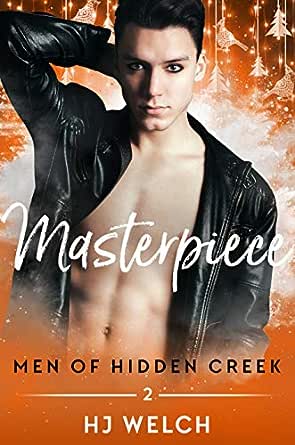 You've subscribed to Men of Hidden Creek Season 3! We will preorder your items within 24 hours of when they become available. When new books are released, we'll charge your default payment method for the lowest price available during the pre-order period.
Update your device or payment method, cancel individual pre-orders or your subscription at
Your Memberships & Subscriptions
There was an error. We were unable to process your subscription due to an error. Please refresh and try again. 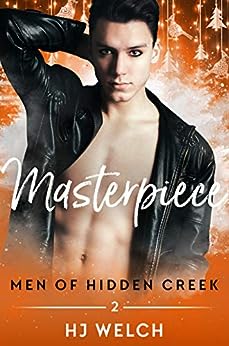 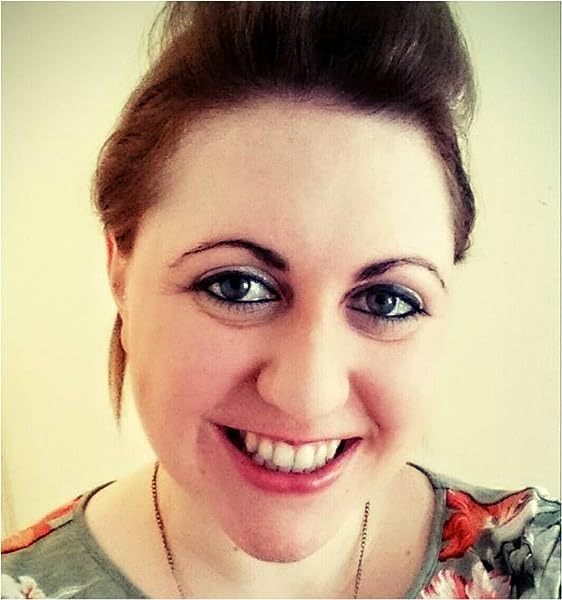 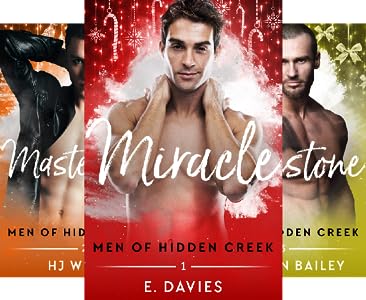 4.7 out of 5 stars
4.7 out of 5
60 global ratings
How are ratings calculated?
To calculate the overall star rating and percentage breakdown by star, we don’t use a simple average. Instead, our system considers things like how recent a review is and if the reviewer bought the item on Amazon. It also analyzes reviews to verify trustworthiness.

Kate B
VINE VOICE
5.0 out of 5 stars Awesome Book
Reviewed in the United States on January 3, 2020
Verified Purchase
I really loved this book. I loved the relationship between Kody & Vince and I think that it progressed naturally like it didn’t feel forced.

Koby is pan-sexual, agender artist that during his school years he was bullied by the jocks as well as being looked down upon by school admin for being an art student. Even though he’s done quite a few commissions like he even did a sculpture for NASA Houston but doesn’t really have much regonition for this accomplishments. Koby receives an email from his hold community college to commission a sculptor of alumni NFL player Vince “Lumberjack” Russo for the new football stadium that is being named after him. Koby is initially apprehensive given his past experiences with bullying but decides he’s going to do it. Koby knew who Vince was as they grew up together but they’d never talked but he knew that Vince didn;t bully him when they were younger.

Vince “Lumberjack” Russo is home recovering from a concussion he received while playing in the NFL and while he’s recuperating from his head injury his old Community College is dedicating the new football stadium in his honour and have commissioned a sculpture from his former classmate Koby Duval who he remembers. Right from the start Vince was fascinated with Koby's art and what goes into the process of making a sculpture, Vince liked the vast difference between Koby and Vince but they still work really well. , After having a few odd reactions to Koby and spending theme with he realises that he’s not 100% straight like he always assumed. After Koby explained this sexuality things started to make more sense for him. I liked how supportive all Koby’s art class friends are and how they’d a;ll clipped in to help with his rehab but that;s okay.

Since this is my go to read of the Men of Hidden Creek (MOHC) Series & the books in the MOHC universe, series.

JD
5.0 out of 5 stars Learning a new love
Reviewed in the United States on December 11, 2018
Verified Purchase
Koby is an artist that grew up being bullied by the jocks and looked down upon by school administrators by being an art student. He is now called on by his alma mater to make a sculpture of the local football star.

Vince is home recovering from a concussion. His old community college is naming their new field in his honor. One of his former classmates is making a sculpture of him. He was always fascinated with Koby's art and can't wait to see what he has planned. Koby knows who he is and who he is attracted to. Vince didn't have doubts until now, but he is open to exploring.
Learning new things about yourself while dealing with recovering and reconnecting with family and friends is hard enough, but throw in a new possible romance and dealing with someone that is bent on destroying the art and it can make anyone stressed.

I loved Koby and Vince. I found them to be open and accepting and wonderful characters. I really liked how open Vince was and appreciated everything that Koby went through.

I received an ARC of this book from LesCourt Author Services. This is my honest opinion and review. I also purchased a copy since I loved it so much.
Read more
Helpful
Comment Report abuse

I love Koby and Vnce in this story! The author did a remarkable job writing a story-line that would keep my mind engaged and made me feel all the way too.

I really enjoyed how we got to know each of these MC's and we saw their authentic vulnerable person. We saw the strength of their characters and we also saw their despair and pain.

T. Walters
5.0 out of 5 stars Unwavering support
Reviewed in the United States on December 6, 2018
Verified Purchase
I really love Koby and Vince. They are such sweethearts. Koby is so loving and supportive of everyone that he comes into contact with he is genuine and thoughtful and so darn feisty. I love the way that he sees things and the unwavering support that he has for everyone around him. Vince is so fun and is just a giant cuddle teddy bear of a man. He is learning new things not just about himself but in general and it's amazing to see the honest love and honesty that is him. The two of them are perfect together.
Read more
Helpful
Comment Report abuse

Rugby8
5.0 out of 5 stars Excellent!
Reviewed in the United States on December 9, 2018
Verified Purchase
Vince and Koby! Love their story....touching, sweet, just enough angst.
They are one of my 3 favorite couples in all of Hidden Creek!
.....Chase and Hunter are my hands down #1 😎😎😎
Really love how often other townies are in the book.....especially Chase, Kayla and Trooper
Read more
One person found this helpful
Helpful
Comment Report abuse

Kindle Customer
4.0 out of 5 stars First time gay
Reviewed in the United States on December 26, 2018
Verified Purchase
I love the Men of Hidden Creek. Koby and Vince were destined to be together. A sexual awakening for Vince who had never been with another man before. Koby didn't want to have anything to do with Vince, he was the image of all the bullies from his school years, but he quickly learned that Vince was different. Some angst, a jealous, homophobic best friend almost ruins everything. Great read.
Read more
Helpful
Comment Report abuse

TL Travis
5.0 out of 5 stars The artist and the jock
Reviewed in the United States on December 10, 2018
Verified Purchase
I enjoyed this story because it was different than anticipated. Both characters had been judged based upon their likes versus getting to know who the person underneath. It was eye opening when all assumptions were cast aside.
Read more
Helpful
Comment Report abuse

T J
5.0 out of 5 stars Love
Reviewed in the United States on December 4, 2018
Verified Purchase
Koby and Vnce are amazing for each other. Gentle giant Vince shows Koby how to let his walls down and that not everyone is what they appear.
Koby shows Vince that it's okay to be you, even if it doesn't conform to the expectations others have for you.

Together, they are magic pure and simple. The sex scenes are wonderful as are the beginning interactions when they are still trying to feel each other out.
Read more
Helpful
Comment Report abuse
See all reviews

Suzanne Robinson
5.0 out of 5 stars Absolutely fantastic
Reviewed in the United Kingdom on December 7, 2018
Verified Purchase
WOW I absolutely love this book and the whole series it's some seriously amazing writing, My Koby finally got his HEA with his Vince, there is one person in the book that I instantly hated but other than that I love love love that it worked out the way it did well done Helen absolutely beautiful and extremely well written I love it so much never stop writing because I will never stop reading your books <3
Read more
Report abuse

SarahH
4.0 out of 5 stars I love HJ Welch!!
Reviewed in Australia on December 12, 2018
Verified Purchase
This is such a story of opposites attracting - Koby loves art and Vince is a jock but despite this they are absolutely perfect together. Both men have walls they have built around themselves to keep themselves safe, but as a couple they help each other feel safe enough to bring these walls down to allow love in. It’s written with Helen’s usual beautiful style and character development and I love the way she brings her characters to life and into each other’s lives. Such a feel good read!

I received an arc of this book and am voluntarily leaving an honest and unbiased review. In addition I enjoyed this book so much I have gone on to buy a copy of this book
Read more
Report abuse

Kindle Customer
5.0 out of 5 stars Koby is fragile...who knew
Reviewed in Canada on December 4, 2018
Verified Purchase
After 2 seasons, the one thing we all wanted and were waiting for is here..Koby.

Seeing Koby through the previous seasons, I thought he had everything together and would be the protector of the lover he chose. Helen through that out the window and this story was sooooooooooo much better than I ever imagined it would be. I was in tears multiple times and could not be happier that Vince is the man who was able to make Koby the best and happiest man he could be.

Desi
5.0 out of 5 stars Fantastic !
Reviewed in Germany on December 6, 2018
Verified Purchase
I love the entire Hidden Creek series. Koby and Vince are a great couple. Koby, agender and pan, it was great to have a character who is not "just" bi or gay.
It's an emotionally charged book, with a bully who is really sick.
As Vince and Koby find together, is written fantastically, also the uncertainties, the vulnerability of the characters.
And I love Pac Man.
Read more
Report abuse
See all reviews