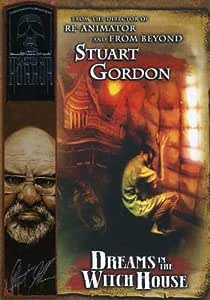 Masters of Horror - Stuart Gordon - Dreams in the Witch House

WHEN STRESSED-OUT STUDENT WALTER GILMAN RENTS A ROOM IN A DECREPIT OLD HOUSE, HIS GRADUATE THESIS STUDIES BEGIN TO TAKE SOME VERY STRANGE TWISTS. HE SUFFERS NIGHTMARES AND SUSPECTS THAT A GATEWAY TO ANOTHER DIMENSION MAY EXIST BEHIND ONE OF THE WALLS IN HIS ROOM.

Director Stuart Gordon picked an H.P. Lovecraft story for his installment of Showtime's Masters of Horror series. So what did you expect? This filmmaker gained his horror-movie spurs with his wild and wonderful Lovecraft flicks Re-Animator and From Beyond (following up years later with another H.P. tale, the fishy Dagon), so nothing could be more super-natural. For his hour-long episode, Gordon chose Dreams in the Witch House, which follows a student (Ezra Godden) at Miskatonic University (that's Lovecraft's frequently-mentioned fictional school) as he moves into a suspiciously cheap boarding house. When he has intense nightmares about a rat with a human face, it should be a warning sign, but the student is mightily attracted to a single mom at the house, played by the mighty attractive Chelah Horsdal. Some acceptable mood-setting comes courtesy of Godden's elderly downstairs neighbor, and the half-dozen shocks are just fine. Somehow the straight-line story disappoints, as the ultimate outcome of it all seems fairly obvious from the opening scenes, and there's nothing much to complicate the slide into evil. Still, this episode merits a passing grade by the strict standards of Miskatonic U. --Robert Horton

3.8 out of 5 stars
3.8 out of 5
42 customer ratings
How does Amazon calculate star ratings?
Amazon calculates a product’s star ratings based on a machine learned model instead of a raw data average. The model takes into account factors including the age of a rating, whether the ratings are from verified purchasers, and factors that establish reviewer trustworthiness.
Top Reviews

John's Horror Corner
3.0 out of 5 stars An entertaining horror segment, but not quite worthy of being a full-fledged Lovecraft film.
Reviewed in the United States on January 25, 2019
Verified Purchase
Stuart Gordon’s adaptation of H. P. Lovecraft’s story for Masters of Horror.

A physics graduate student of the Miskatonic University, Walter (Ezra Godden; Dagon) is torn between questioning his sanity and suspicions that he’s been sleepwalking after renting a room in an old house previously the residence of a 17th century witch. Walter is haunted by a series of disturbing dreams, he wakes up in strange places, and he comes to fear for the lives of his neighbor and her infant.

The special effects are serviceable but nothing to brag about. When Walter has dreams of a rat with a human face, it seems like something from a PG-13 horror for kids; very Goosebumps-ish. Then he is seduced by a sultry naked witch (Chelah Horsdal; Altitude, AVP: Requiem) in a disturbing sex scene and there is a satisfyingly gushy eye-gouging scene. But for me, the most entertaining bits were the final scene with the human-faced rat (during the gory finale) and the simple inclusion of the flesh-bound Necronomicon as we’ve seen in so many horror films before (e.g., Jason Goes to Hell, Evil Dead, The Babysitter, The Unnamable).

Based on the story (of the same name) by H. P. Lovecraft, this is probably the weakest work by director Stuart Gordon (Dagon, The Pit and the Pendulum, Re-Animator, From Beyond). The writing is a bit dry and, outside of the star (Godden), the performances seem unrefined—as if trained actors walked in and did one take without feeling out the characters. If it were a bit shorter—clipping exposition but keeping all the effects scenes—it would make a fine segment for a lower budget anthology film. And, being part of the Masters of Horror series, I essentially view it as part of a huge anthology.

Jared P.
4.0 out of 5 stars Great series, great director, enjoyable film
Reviewed in the United States on June 4, 2019
Verified Purchase
Stuart Gordon has probably made the most Lovecraft adaptation movies to date. If there is another director that has made more, I'm not aware of them. The thing about Stuart Gordon films, especially his Lovecraft films, is he likes to put his own spin on them. This means they'll be a little different from the stories and usually include one or more brief scenes of nudity. I won't question his methods since he makes good films but I will note it whenever discussing his movies. Overall really good Lovecraft film albeit quite short (less than an hour). A lot of the other Masters of Horror movies are quite good as well although not Lovecraft stories. If you like and desire a Lovecraft movie, you'll be pleased with this one and other Lovecraft movies Stuart Gordon has done. If you're a purveyor of horror, look at some of the other Masters of Horror films.
Read more
Helpful
Comment Report abuse

Leo Hott
5.0 out of 5 stars Lovecraft blends science, theology & the occult into a horrifying tale!!!
Reviewed in the United States on November 26, 2015
Verified Purchase
One of my favorite H.P. Lovecraft movie adaptations! I really like how Stuart Gordon worked in the concept of the physic's M-Theory into this movie. H.P. Lovecraft's horror stories seem so far out there that many fail to realize that "The old Ones" are mentioned in the Bible & Moloch & Dagon were actually worshipped in great antiquity! I discovered H. P. Lovecraft through Robert E. Howard, they were contemporary's & corresponded by mail. Both authors wrote horror based on the Cthulu mythos. Author Stephen King also joined the club so to speak with his short story Crouch End. One thing every H.P. Lovecraft fan knows is its hard to translate his visions of horror to the big screen & becomes used to alterations. Stuart Gordon seems to be one of the best at bringing Lovecraft tales to the big screen & mercifully adds some humor that is not in the mind bending stories of Lovecraft. "Dreams in the Witch House" has less comic relief than other Gordon / Lovecraft interpretations & ranks near the top of the all time scariest movies, especially if you believe practitioners of the black occult are still practicing their evil arts! Alistair Crowley's Grimoir "The Lesser Key of Solomon" is still selling thousands of copies a year! Scary!!! And the physicist at C.E.R.N. are trying their hardest to open forbidden doorways!!! Let us all hope that the horror fiction of H.P. Lovecraft is not as prophetic as H.G. Wells or Jules Verne!!!!
Read more
One person found this helpful
Helpful
Comment Report abuse

Yukon Jack
3.0 out of 5 stars Good movie,with Disappointments.
Reviewed in the United States on December 7, 2014
Verified Purchase
This Is Another Interesting Rendition Of A Famous horror Story By H.P. Lovecraft. However,I am really some-what Disappointed,In The way it was Done,On film. While I was reading the story,I was riveted,and could really sense and feel the horror of it,coming at me,out of The pages,But the film rendition really isn't as good. They bring in some intense romance,which was never in the written story,and which I feel has No Place whatsoever,in The Film,Either. I feel,This Is An Extremely Bad Botch-Up. It shouldn't have Been Put In,Because,The way the story was written;There Is an Aura Of Increasing and worsening Terror,That Builds slowly But Relentlessly,as the reader starts to realize that the protagonist Is Doomed. There Is no way he can escape. He tries everything,But nothing works,and,In The End,He Is Finally Killed,By The Evil Agencies That Tormented Him,From The Start. The written story gets this across,fantastically well,But,Bringing romance into the film of it;I Think,Just Totally Detracts from the general theme,of the eeriness and horror,of his Ultimate Fate. So,I'd say That was A Total No-No. Shouldn't Have done It. Otherwise,I Think It's Quite Good. I'd recommend this to those,who don't mind seeing a semi-good horror film,with some botch-ups in it.
Read more
Helpful
Comment Report abuse

Master of Reality
3.0 out of 5 stars It's OK, but Could be Better
Reviewed in the United States on September 26, 2009
Verified Purchase
Based on the HP Lovecraft story about a legend of a house in which a a witch travels through dimenions thru the angular design of the house. The plot and storyline have so much potential, if you have ever read Lovecraft's work you will know why, but the adaptaion of the screen play does not truely capture the intense and spectacular imagination of the actual story. The acting is very good, but the direction is flawed thus casuing some loss of intrest. There are some good edge of your seat momemnts and a good scare or two, but don't execpt too much. Some nudity and very violent content, so not recommended to be seen by kids.
Read more
Helpful
Comment Report abuse
See all reviews from the United States

Page 1 of 1 Start overPage 1 of 1
This shopping feature will continue to load items when the Enter key is pressed. In order to navigate out of this carousel please use your heading shortcut key to navigate to the next or previous heading.
Back
Next
Pages with related products. See and discover other items: hp direct