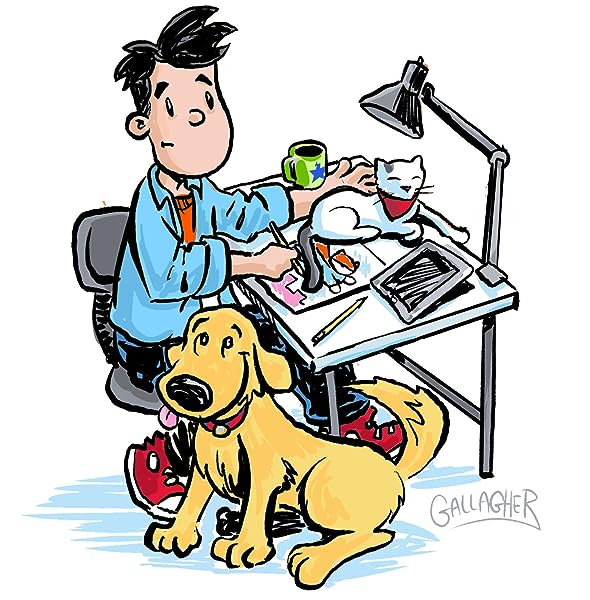 Gr 2-5-Welcome to Kittyopolis, where an anthropomorphic cat named Max Meow, in desperate need of viewers for his vlog, decides to film a segment at his friend Mindy Microbe's secret science lab. Unbeknownst to them, a nefarious rodent by the code name of Agent M has sent Robot Reggie to steal Mindy's meteor meatball, and during the ensuing struggle, Max accidentally bites into the meatball and becomes the Cat Crusader. Now with super strength, the ability to fly, and a tail that sends out bolts of electricity, Max tries to save the city all while keeping his viewers entertained. Gallagher's story is light on text but big on vibrant, high-energy artwork-a combination that's sure to keep even the most hesitant of readers engaged. Max must learn not only how to be a superhero but also, more important, how to be a good friend, by not taking credit for Mindy's accomplishments. Depicted with dark skin and dark curly hair, Mindy is no mere sidekick; indeed, she could very well have gotten title billing alongside Max. VERDICT Fans of Dav Pilkey's "Dog Man" series will love this quirky graphic novel.-Amanda Melilli, Univ. of Nevada, Las Vegasα(c) Copyright 2011. Library Journals LLC, a wholly owned subsidiary of Media Source, Inc. No redistribution permitted.

MEOWZA! Here's what people are saying about MAX MEOW:

“Full of humor and action, this new series opener will be catnip for fans of Dav Pilkey’s Dog Man.” —Kirkus Reviews

"A heaping helping of candy colored fun!" —Ben Hatke, creator of the Zita the Spacegirl and Mighty Jack series

"Cats and kittens alike will be thrilled to finally have a hero they can look up to." —Mike Maihack, creator of Cleopatra in Space series

"Max Meow is sure to save any young reader's day with super-laughs on every page!" —Norm Feuti, syndicated cartoonist and creator of the Hello, Hedgehog series


"Big on vibrant, high-energy artwork—a combination that’s sure to keep even the most hesitant of readers engaged. . . . Fans of Dav Pilkey’s “Dog Man” series will love this quirky graphic novel." —School Library Journal

John Gallagher is the art director of the National Wildlife Federation's "Ranger Rick" magazine and has been drawing comics since he was five. John is also the cofounder of "Kids Love Comics" (an organization devoted to using graphic novels to promote literacy) and leads workshops teaching kids how to create their own comics. John lives in Virginia with his wife and their three kids. Visit him at MaxMeow.Com, on twitter @johnBGallagher, on facebook @MaxMeowCatCrusader and on instagram @johngallagher_cartoonist.
Read more

Start reading Max Meow Book 1: Cat Crusader on your Kindle in under a minute.

4.8 out of 5 stars
4.8 out of 5
152 global ratings
How are ratings calculated?
To calculate the overall star rating and percentage breakdown by star, we don’t use a simple average. Instead, our system considers things like how recent a review is and if the reviewer bought the item on Amazon. It also analyzes reviews to verify trustworthiness.

Anna
5.0 out of 5 stars Super fun graphic novel!
Reviewed in the United States on October 14, 2020
Verified Purchase
Max Meow is a great new superhero! We read it aloud to our 4. 5 year old, and we know he'll love reading it on his own when he's older. Lots of clever surprises in the book, and the cartooning is terrific. If you like Investigators, or Dog Man, you will love this! Already looking forward to the next installment!
Read more
6 people found this helpful
Helpful
Report abuse

Debbie Werrlein
5.0 out of 5 stars Engaging, witty, cute. A great read!
Reviewed in the United States on October 12, 2020
Verified Purchase
I bought this for my niece and thought I'd take a quick look before sending it to her. I ended up reading the whole thing cover to cover! It's engaging, witty and cute - how does Gallagher make a square-headed legless robot who is supposed to be one of the bad guys so lovable? And I appreciated the little nods and jokes to adults, like the phrases "Why I oughta..." and "Oh the humanity!" It reminded me of how the old-time comics used to do that. Also, beautiful bright bold illustrations perfect for young kids.
Read more
4 people found this helpful
Helpful
Report abuse

Kathy Brown
5.0 out of 5 stars Great fun for all ages!
Reviewed in the United States on October 13, 2020
Verified Purchase
What a cute and fun book! It pays homage to the superhero cartoons of our childhood (cliffhangers at the end of each chapter.)
I loved the humor and the graphics are excellent. A great book for kids and adults alike . Two thumbs up. Max Meow and John Gallagher are PAW-SOME!

Brandy Gee
5.0 out of 5 stars Perfect for my 7 year old
Reviewed in the United States on December 9, 2020
Verified Purchase
My older son who is 11 now is a huge fan of the Dog man series so I wanted something for his younger brother to like that was similar to peek his interest in reading for fun.
This book did the trick. My 7 year old is reading this for pleasure which is fantastic. I think it is because it written more like a comic and less like a text book. It keeps them reading longer and the pictures keep their focus longer. Can't wait to get him the next one.

Liz M.
5.0 out of 5 stars This book is a game changer for kids learning to read!
Reviewed in the United States on October 21, 2020
Verified Purchase
Thank you, John Gallagher, for creating this awesome book. Our younger boys (8 and 11) are obsessed with it since it arrived October 6th and they are already anxiously awaiting the next one (which we pre ordered already!). The story line and the graphics are great and has captured their true interest in reading every day! It was a bit of a struggle to get them reading every day with joy (especially for our 8 year old) but after reading this book, they are so excited about reading...for that I give you a big Thank you!! We are looking forward to reading the next one and hopefully many more to come.
Read more
2 people found this helpful
Helpful
Report abuse

kanani7
5.0 out of 5 stars Team PUNK TACO loves Max Meow!
Reviewed in the United States on October 15, 2020
Verified Purchase
Both my boys loved Max Meow and can't wait for the next one. They both read it multiple times and I am sure will read it more. Great book for all ages.
Read more

kyleandmegan
5.0 out of 5 stars Great!
Reviewed in the United States on October 9, 2020
Verified Purchase
My 8 year old son loved it! Read it right away and finished it same day.
Read more
2 people found this helpful
Helpful
Report abuse

Frank J Radics
5.0 out of 5 stars It teaches you about friendship.
Reviewed in the United States on October 20, 2020
Verified Purchase
We bought Max Meow for our daughter's 11th birthday as she is a big graphic novel reader. She loved the graphics and laughed a lot at the very funny parts in the book. She was lucky to meet John and she says he is a 'very lovely, nice and funny man'. She can't wait for his next book to be released.
Read more