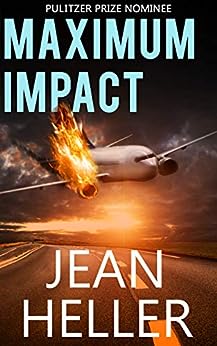 The new Sexton 811 aircraft, fast and fresh and filled with passengers, tumbles off the runway at Dulles International Airport in Washington, D.C., killing more than 300 people and getting this deftly written, suspenseful first novel off to a stomach-churning start. As the various agencies gather to determine the accident's causes, ace aviation reporter Steve Pace quickly discovers the possibility that evidence is being concealed. Was the cause pilot error, a bird sucked into the engines or faulty design? Are the investigators thorough and unbiased, or are they involved in a cover-up? And who are the thugs in the blue van? While Pace works phones and friendships to unearth the truth, potential sources are being bought off or killed and it is soon clear that the reporter's own reputation--and even his life--are in danger. Heller, who has won the Polk Award for her investigative journalism, offers an accurate insider's view of news reporting, the aviation industry and the seamier sides of corporate and political manipulation. Her management of a large cast of characters is deft and she keeps readers guessing until the stunning final surprises. Her debut is as vivid and exciting as a bolt of summer lightning.
Copyright 1993 Reed Business Information, Inc. --This text refers to an out of print or unavailable edition of this title.

A Pulitzer-winning aviation reporter for a Washington, D.C., daily sticks with the story of a downed jumbo jet and uncovers a sinister web of political, bureaucratic, and industrial corruption without the help of Carl Bernstein--in a first novel from a celebrated investigative reporter. The Consolidated Pacific jetliner that went down at Washington's Dulles airport was carrying, in addition to hundreds of doomed passengers, the reputation of an Ohio engine manufacturer hoping to crack the world jet market. How unfortunate, then, that it was one of those Buckeye engines that caused the crash. Or was it? In the confusion of the aftermath, acting on orders from somebody with a Great Deal of Money, a member of the NTSB investigative team plants a big squished bird in the engine, steering inquiry away from the possibility of defective parts. But there's a witness, and the witness threatens to squeal. There's also pressure from a nasty Ohio senator to wrap up the investigation quickly and without any suggestion of Buckeye culpability. The single bird theory is close to acceptance until Washington Chronicle reporter Steve Pace, who persists in his investigation despite the threat of a couple of hired Baltimore goons, gets to the bottom of things. In the process, Pace loses a friend, regains a lost love, and has a nice visit from his daughter. Populated with faceless, unlovable bureaucratic dweebs, drowning in journalistic detail, and much too long. The only twist to the plot comes too late for anyone to care. -- Copyright ©1993, Kirkus Associates, LP. All rights reserved. --This text refers to an out of print or unavailable edition of this title.

John R. Linnell
4.0 out of 5 stars If you can find it - buy it!
Reviewed in the United States on May 15, 2001
I started this novel on an airline flight...which either shows my confidence in the industry or the fact that I love stories about planes and such. This book has been on my "books to read table" for some time and for reasons I am unable to fathom it took me a few years to get to it. The story starts with a horrendous airline disaster which occurs on take off as the #3 engine of the plane in question destroys itself and everyone on the flight. From that simple premise the author takes us through the investigation of such a tragedy, but it is the investigation and the manner in which it is being conducted which is quickly the focus of the piece. The NTSB investigation is flawed..not by incompetance but by corruption. The uncovering of the corruption by an investigative reporter is the peeling of the onion which exposes shortcomings in all of the professions it explores. The book which I read is the paper back version and it is a bit longer than necessary, but it is nevertheless an entertaining and informative read which is about all we ever look for in a novel these days. The book is apparently out of print at the moment, but the effort by the author deserves a review ....
Read more
4 people found this helpful
Helpful
Report abuse

Bernadette Beck
5.0 out of 5 stars Leaves you craving for her next book!
Reviewed in the United States on June 4, 2020
Heller does not disappoint! There’s a disturbing reality about Maximum Impact with its complex characters and twists and turns. I highly recommend this well written thriller that promises to keep you up at night and leave you craving for her next book!
Read more
Helpful
Report abuse
See all reviews

Kindle Customer
5.0 out of 5 stars Excellent read
Reviewed in the United Kingdom on July 6, 2021
Verified Purchase
I love aviation novels, and this one came up as a suggestion on Kindle. If ever there was a good suggestion this was it. Action, intrigue and twist a plenty. Not read Jean Heller before, but will do so from now on.
Read more
One person found this helpful
Report abuse

David Phipps
5.0 out of 5 stars A very good page turner!
Reviewed in the United Kingdom on March 3, 2021
Verified Purchase
597 pages of intrigue and a must read for aircraft fiction fans about the crash of a new airliner. Highly recommended and an ending 'out of the usual'.
Read more
One person found this helpful
Report abuse
See all reviews

Tags that will help you discover similar books. 5 tags
mystery, thriller & suspensehard-boiledpsychologicalgenre fictionpsychological thrillers
Results for:
Page 1 of 1Start overPage 1 of 1
Previous page
Next page
Where do clickable book tags come from?
Book tags are created from a variety of sources, some of which are customer-generated. Amazon is not legally responsible for the accuracy of the tags represented. If you are an author or publisher and would like to remove a tag associated with your title, please contact your vendor manager or publisher support team.
Back to top
Get to Know Us
Make Money with Us
Amazon Payment Products
Let Us Help You
EnglishChoose a language for shopping. United StatesChoose a country/region for shopping.
© 1996-2021, Amazon.com, Inc. or its affiliates