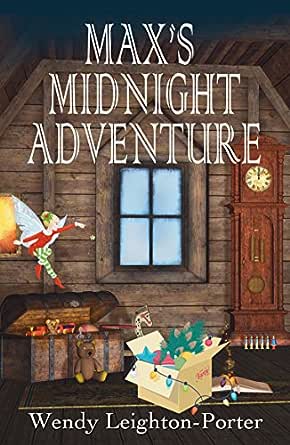 You've subscribed to Shadows from the Past! We will preorder your items within 24 hours of when they become available. When new books are released, we'll charge your default payment method for the lowest price available during the pre-order period.
Update your device or payment method, cancel individual pre-orders or your subscription at
Your Memberships & Subscriptions
There was an error. We were unable to process your subscription due to an error. Please refresh and try again. 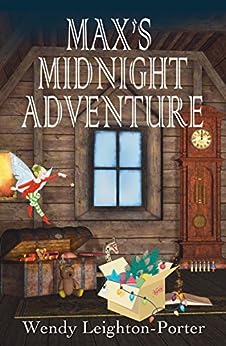 Max's Midnight Adventure (Shadows from the Past Book 11) Kindle Edition 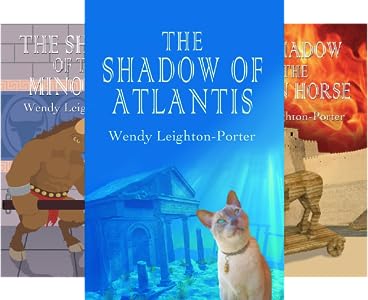 "This is a wonderful peep into Max's life that affords lots of laughs, largely due to the inventiveness of the author, the hilarious interactions between the various characters, and the ultimate charm of Max, the big-hearted (albeit slightly cowardly) hero of the series."
Fiona Ingram, author of the Chronicles of the Stone series

"Another heartwarming adventure short story by Wendy Leighton-Porter. Max's Midnight Adventure combines forgotten toys from the past with the magic of Christmas. This is such a cute story. It was enjoyable to see another side of Uncle Richard. It is another perfect book to help you get in the holiday spirit. With a surprise and funny ending, you don't want to miss this wonderful Max's Adventure. Don't forget to read the author's notes. It contains more Christmas-y goodness. A must-read for Shadows From The Past and Max's Adventures fans!"
READERS' FAVORITE --This text refers to the paperback edition.

5.0 out of 5 stars
5 out of 5
5 customer ratings
How does Amazon calculate star ratings?
Amazon calculates a product’s star ratings based on a machine learned model instead of a raw data average. The model takes into account factors including the age of a rating, whether the ratings are from verified purchasers, and factors that establish reviewer trustworthiness.
Top reviews

Cheryl Carpinello, author of MG Arthurian Tales and others. See my Amazon Author Page
5.0 out of 5 stars What do my Christmas decorations do in my basement?!!
Reviewed in the United States on March 2, 2020
Verified Purchase
In this adventure, Max gets to experience every child's dream, or is it a dream that turns into a nightmare?

After investigating a light in the attic, Max crawls into a cardboard box to sleep. When he wakes up, he is locked in. Darn, that means he is going to miss the vacation with Uncle Richard, the twins, Charlie, and his mom. He is desperate to find a way out. The only problem: only old toys and Christmas decorations are in the attic.

Suffice it to say, the author tells an enchanting tale of toys that come alive, a fairy called Tinks who is mad at Max, and a host of classic Christmas decorations including the entire cast of the Twelve Days of Christmas!

Will Max be saved by accidentally wishing on a plane? You'll have to read this one to find out!!
Read more
Helpful
Comment Report abuse

Richard and Liz
TOP 500 REVIEWER
5.0 out of 5 stars ~~ Talking toys from the past and three insulting French hens?! ~~
Reviewed in the United States on December 9, 2016
Verified Purchase
Although no time travel in this one (Max suffered quite the ordeal in The Shadow of the Two Princes which precedes this book), it is definitely not one you will want to miss if you are a fan of this series. Uncle Richard has just announced that he is taking the twins, Joe and Jemima, and Max to the seaside tomorrow. That means going up into the attic to find the suitcases. Of course, Max being nosy, follows him up. Whilst up there Uncle Richard has a nostalgic look at some of his and James' (father of the twins who has got lost in time along with their mother) childhood toys. Not wanting to intrude, Max curls up and takes a snooze.

Uh oh! Max is now trapped in the loft with Action Man, Tinks, Colonel Nutcracker and many more! Why is Tinks so mad at him? Can they all work together to help bring notice of Max's distress to the folks below? ENJOY this short and rather humorous story. I purchased this book for my Kindle. I was not required to write a review but chose to do so. Thanks, Liz
Read more
Helpful
Comment Report abuse

Kimberley
5.0 out of 5 stars Fall about laughing with this gem of a novella
Reviewed in the United States on January 16, 2020
Max’s Midnight Adventure takes us into the third of the solo adventures written for Max the Tonkinese cat, Wendy Leighton-Porter’s breakout star from the Shadows from the Past series, and I am HERE for it. Toy Story meets the Nutcracker in this gem of a mini tale, which for once does not feature any time travel or historical references. Instead, the nosy and adorable Max gets trapped in the attic when he follows Uncle Richard up the stairs in his quest for holiday suitcases. Max gets more than he bargains for as he meets a charming and varied array of personalities from the Christmas fair to an actual Action Man.

This was a hoot and a half. I love Max’s cowardly ways, and after the events of Shadow of the Two Princes, I felt like it was very necessary for readers to slip off with Max for a mini adventure that relieves some of the tension and his experiences in that book. As always Wendy Leighton-Porter weaves her magic in the atmosphere and storytelling, but the real star of this novella is in the artistry of her character development. Where the author is usually working with figures from real history and adapting them to her story needs, here she’s set free with total invention from the toys in the attic and it showcases a wide variety of personalities an fantastic inventions of idiosyncrasy and temperament. Where kids will absolutely fall over laughing at the antics of Tinks, the Colonel and those darned hens, adult readers can truly marvel at the sophistication and ease with which these larger than life figures are brought into being. A fantastic tale for one and all, and a perfect winter read.
Read more
Helpful
Comment Report abuse

Fiona Ingram
5.0 out of 5 stars A Delightful Peek Into Max's Life!
Reviewed in the United States on July 2, 2016
Max’s Midnight Adventure by Wendy Leighton-Porter is a short, delightful story starring Max himself. Anyone who has been following the Shadows From the Past series will, by now, know a lot about Max. A lilac-coloured Tonkinese cat, big boned (definitely not fat), with aquamarine eyes, Max belongs to Jemima and Joe, the twins who’ve been staying with their Uncle Richard after their parents stepped into a magic book and disappeared. They’re not dead, and the twins know this because during their adventures back in time, using the magic book that belonged to their dad, they’ve either caught glimpses of their parents or heard news that they’re alive but have moved on in time. Uncle Richard, a professor of Archaeology and a bachelor, is at a loss as to how to entertain his niece and nephew, but he does his best. Uncle Richard suggests a holiday away down at the coast, in Devon, for a few days and the kids are very excited about the idea, as long as Max can come with.

A holiday means suitcases and they’re in the attic, along with a whole bunch of old boxes, filled with the stuff one usually finds in attics – old toys, Christmas decorations, favourite stuffed animals that no one has the heart to throw out. Max, although short on courage, is long on curiosity and several close shaves during their time travel adventures have done little to diminish his nosiness. He follows Uncle Richard into the attic and does his own poking around. He’s astounded to see the twin’s uncle clutching a shabby old teddy bear and weeping over the loss of his brother, and realises that just because adults don’t say much doesn’t mean they don’t feel sadness. It’s all a bit much for Max who thinks a quick snoozette, while Uncle Richard is pottering about, is in order. As you can imagine, Uncle Richard finishes up in the attic and goes back downstairs, leaving Max curled up inside a box, but there’s someone else in the box as well… How is Max going to get out of the attic? Will he be left there while the kids and their uncle go on holiday?

I love author Wendy Leighton-Porter’s style. In just a few lines of dialogue we meet and get to know a variety of characters, from Colonel Nutcracker (a pompous regimental sort) to Tinkerbell (aka Stinkerbell) who is particularly nasty and sarcastic to poor old Max just because he broke her wand by accident (which could have happened to anyone!), to Action Man who can’t stop flexing his muscles and showing off, to the entire cast of The Twelve Days of Christmas … with the French hens going on strike, the nine ladies getting into a huddle with the football team, to absolute chaos and mayhem. This is a wonderful peep into Max’s life that affords lots of laughs, largely due to inventiveness of the author, the hilarious interactions between the various characters, and the ultimate charm of Max, the big-hearted (albeit slightly cowardly) hero of the series.
Read more
Helpful
Comment Report abuse
See all reviews from the United States

Loddie
5.0 out of 5 stars Another great book
Reviewed in the United Kingdom on March 9, 2017
Verified Purchase
This is the second book I have read by this fabulous author and I loved it.
Read more
Helpful
Sending feedback...
Thank you for your feedback.
Sorry, we failed to record your vote. Please try again
Report abuse