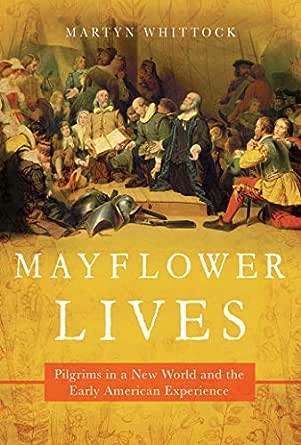 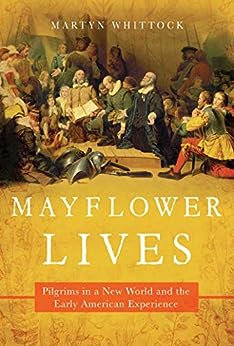 Enjoy a great reading experience when you buy the Kindle edition of this book. Learn more about Great on Kindle, available in select categories.
Read more Read less

Martyn Whittock has written numerous educational and history books, including titles on Viking and Anglo-Saxon history. He has been a consultant for the BBC, English Heritage, and the National Trust and has written for Medieval History magazine and other archaeological journals. He lives in Oxford, U.K.

Amazon Customer
5.0 out of 5 stars Loved reading this!!
Reviewed in the United States on October 18, 2019
Verified Purchase
I enjoyed reading this very much. It reads more like a novel than just stating boring facts. It highlights the lives of the passengers of the Mayflower and key figures in Plymouth Colony. It fleshed out the people who lived there and had no problem holding my interest. I highly recommend it.
Read more
8 people found this helpful
Helpful
Comment Report abuse

Amazon Customer
5.0 out of 5 stars Mayflower Lives: Pilgrims in a New World and the Early American Experience
Reviewed in the United States on February 5, 2020
Verified Purchase
I am a Mayflower descendant and my husband has done decades of family research on both sides of the family. I gave this book to him as a gift. He is very pleased with it. Says that the author has captured a different perspective on the Mayflower passengers. It delves into their lives before the trip as well as their experience settling in their new land. It is the first book on the Mayflower passengers that has this perspective. He has read much on the subject and this book adds tremendously to the wealth of information out there.
Read more
5 people found this helpful
Helpful
Comment Report abuse

A Wisconsin Reader
5.0 out of 5 stars A Fascinating Look at the Early Americans
Reviewed in the United States on August 6, 2019
Quite honestly, I expected to learn a great deal from this book, but I didn’t expect to enjoy it nearly as much as I have done. This properly footnoted history reads like a novel, and it is hard to put down. The reader keeps wanting to see what happens next! This book is simply compelling, and Martyn Whittock is to be commended on taking what could have been a repetitive, dry history and turning it into a tour-de-force. I have been recommending this book to everyone I know who is interested in history.

“Mayflower Lives” tells the history of the founding of Plymouth Colony by a group of Puritan English people by regaling the reader with the interesting, albeit shortened biographies of a number of the people at the founding of the colony. We tend to think of the “Pilgrims” as a collective group, and can easily forget that each was an individual. The biographies range from the elite members of the church, to Native Americans, to women and children. We see those who prospered, those who never fit in, and we see those who died especially during the first winter of 1620-1621.

The only thing I regret about this book was that it wasn’t longer. Although the mix of biographies is stellar, it whetted my appetite for more. I am just greedy, I guess. It is so interesting to read about actual people, not just amorphously faceless “Pilgrims.” In the course of the subjects’ lives we get a good, if somewhat cursory look at the history of the Plymouth Colony in its early years, when its survival was uncertain, to its integration into the later, larger administrative area which came to be called New England. One life, that of Richard More who was about six years old in 1620, carries us to the Salem witch trials of 1692 and beyond.

I heartily recommend this book. It is not a magisterial (read: dry) history of Plymouth Colony, it is an alternate way of looking at that history. The plentiful footnotes (and I am a reader of footnotes) give interesting paths for further reading and research; I have already availed myself of some of them. The lives described in “Mayflower Lives” are worth reading about, as these people and their culture have had such a big effect on American life and culture. If you are at all interested in history, this is a book worthy of your time.

Thanks to the publisher and NetGalley for the ARC.

J.K
TOP 1000 REVIEWER
5.0 out of 5 stars Fresh look
Reviewed in the United States on August 6, 2019
Whittock provides a fresh facet at the original people who sailed to North America on the Mayflower. He focuses on their individual stories and how they fit within the broader spectrum of colonization. I thoroughly enjoyed his research. Reading the early Court records was more salacious than a trashy novel. The saddest and most compelling story were the four children who were aboard. They were deemed illegitimate by the court and ripped from their mother and shipped to the New World, unwanted and unloved. Only one would survive the first winter. THe author follows through with the mother's story and what happened to the surviving child. Nothing I have ever read about the Mayflower ever mentioned those four children. Mayflower Lives is a significant contribution to the canon of scholarship concerning the early history of America. Thanks to NetGalley for the advance read.
Read more
8 people found this helpful
Helpful
Comment Report abuse

American Express
1.0 out of 5 stars Really?
Reviewed in the United States on October 21, 2019
A lot of 21st century Monday morning quarterbacking if you ask me. Stop judging history by today's standards! It's absurd to do this. I really have a distaste for this kind of writing.
Read more
7 people found this helpful
Helpful
Comment Report abuse

Stephen T. Hopkins
4.0 out of 5 stars Personal
Reviewed in the United States on July 23, 2020
Thanks to covid-19, there will be no vacation trip to Cape Cod in Summer 2020, so I took a virtual journey to that area thanks to reading Martyn Whittock’s book titled, Mayflower Lives: Pilgrims in a New World and the Early American Experience. Whittock profiles fourteen individuals as a way to personalize the lives of the saints and strangers who came to the New World in the 17th century. One of those profiled is my namesake, Stephen Hopkins, one of the strangers and not a saint, probably the only thing we have in common. Every time I read a book about this time and place, I learn something new. Fans of history are those readers most likely to enjoy the well-told stories in this book.

Yorky Bar Kid
5.0 out of 5 stars Well researched
Reviewed in the United Kingdom on February 27, 2020
Verified Purchase
It was an interesting read of a number, but not all, of the first passengers of the Mayflower. Well researched and with copious references to use as follow-ups.
Read more
Report abuse
See all reviews