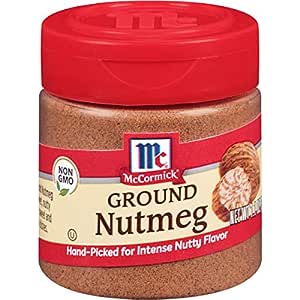 Pantry orders of $35 and up ship for free- a $5.99 shipping fee applies to orders under $35. Due to high demand, delivery may take longer than usual. Learn more
In Stock.
Ships from and sold by Amazon Pantry.
Want it Tuesday, Aug 18 ? Details

At McCormick, we hand-pick the whole nutmeg for intense nutty flavor. Our Ground Nutmeg adds distinctive sweet-spicy flavor to a variety of sweet and savory dishes. Nutmeg is at home in dishes around the world, including in Indian curries, French bechamel, Swedish meatballs and Middle Eastern lamb dishes. So versatile, it works with savory recipes for scalloped potatoes, glazed carrots, creamed spinach and cream soups. At holiday time, ground nutmeg fills the kitchen with a sweet, nutty aroma when spiced cookies and gingerbread are baking. Use it in rice pudding, pumpkin pie and in beverages like eggnog and mulled wine or cider. It pairs with similar spices, including cinnamon, allspice and mace to enhance the taste of dessert recipes.

4.8 out of 5 stars
4.8 out of 5
354 customer ratings
How does Amazon calculate star ratings?
Amazon calculates a product’s star ratings based on a machine learned model instead of a raw data average. The model takes into account factors including the age of a rating, whether the ratings are from verified purchasers, and factors that establish reviewer trustworthiness.

S. McCandlish
4.0 out of 5 stars Convenient, but a bit over-priced
Reviewed in the United States on August 4, 2020
Verified Purchase
It's nice to get nutmeg pre-ground, since you otherwise need a dedicated nutmeg grinder (the whole spice is large and woody). Nutmeg isn't a spice most of us need very often, and these little packages stack up so that two of them (maybe nutmeg and allspice, or nutmeg and mace) take up the same space as one regular spice jar. However, you're paying a premium here, both for McCormick brand name and for packaging. So, this is not a good deal if you actually use a lot of this stuff. Sure, spice snobs will also want to grind their own fresh. But for typical baking uses, this is just fine.

Nutmeg is quite strongly flavored and scented, and goes a long way. As with other spices that have that sweet-and-aromatic "holiday" kind of taste and and aroma, this will blend well with cinnamon, cloves, mace, allspice, and coriander (and some less common spices like long pepper and – use this one very sparingly or it overpowers – cubeb pepper), so you can experiment until you get exactly the pumpkin pie (or whatever) custom mix you want. Nutmeg is also called for in various African, Middle Eastern, South Asian, and Caribbean dishes, so it's good to have some around. And it's also an major ingredient in Old Bay-style East Coast seafood seasoning (for Boston or New York red chowder). A California spice merchant also makes a San Francisco Bay seafood seasoning that uses a fair amount of it (to my taste buds, it seems kind of like a cross between Old Bay, Italian herbs, and taco seasoning).

Suresh
5.0 out of 5 stars Real antioxidants
Reviewed in the United States on March 20, 2020
Verified Purchase
I happened to read a nice article about the nutmeg and its benefits recently which made me buy this product and it didn't disappoint me. Nutmeg is rich in antioxidants, including phenolic compounds, essential oils, and plant pigments, all of which help prevent cellular damage and may protect against chronic diseases. Nutmeg has a warm, sweet flavour that pairs well with many different sweet and savoury foods. Sometimes it may cause stomach upset if you consume too much at one instance.
Read more

Trend
TOP 1000 REVIEWER
1.0 out of 5 stars Weird Flavor/Putrid Tasting
Reviewed in the United States on May 11, 2019
Verified Purchase
I normally like McCormick Nutmeg. I have considered it the best, but this imparts the worst flavor I've tasted in my sweet potato pies. The flavor is weird. It gives a putrid flavor to my pies. Unfortunately I made up a big batch of filling with this nutmeg....enough for 6 pies. I had to throw it out.

Originally, I thought I got a bad batch of sweet potatoes. So I made some more filling. The new filling had that same flavor, I smelled the nutmeg. Sure enough, that is the problem. The pies tasted like the nutmeg smells. Slightly putrid. Maybe the jar I received was old. I don't know. I've never had a problem with nutmeg spoiling. Maybe they have changed their source for nutmeg. I just know this was the absolute worst I've ever had.
Read more
One person found this helpful
Helpful
Comment Report abuse

Smalls
5.0 out of 5 stars Excellent expiration date
Reviewed in the United States on January 27, 2017
Verified Purchase
I've seen a lot of posts, on this item, where people have complained that the item they ordered had an expiration date within months/weeks of arrival...

Najat
5.0 out of 5 stars Excellent
Reviewed in the United States on June 7, 2020
Verified Purchase
Very excellent product like it size very much.
Read more

Susie
5.0 out of 5 stars Very fresh
Reviewed in the United States on June 8, 2019
Verified Purchase
Convenience of size. I go through a lot. Also freshness. It is very fresh. Thank you for making this available.
Read more
One person found this helpful
Helpful
Comment Report abuse

Andrea B.
5.0 out of 5 stars Great price for the size
Reviewed in the United States on June 30, 2019
Verified Purchase
If you do a lot of cooking then this size spice for the price is a great bargain
Read more
One person found this helpful
Helpful
Comment Report abuse
See all reviews from the United States
Pages with related products. See and discover other items: scalloped potato