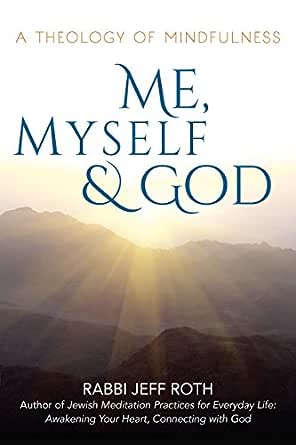 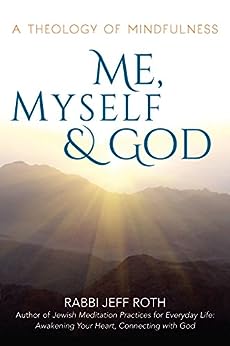 Me, Myself and God: A Theology of Mindfulness Kindle Edition

"A theology of mindfulness is unique! Practitioners who have found that mindfulness has deepened their religious sensibilities will rejoice to find the God-language that resonates with their experiences of freedom and compassion."
―Sylvia Boorstein, author, That's Funny, You Don’t Look Buddhist: On Being a Faithful Jew and a Passionate Buddhist

“A literate and nuanced synthesis of mindfulness practice and the study of Torah.”
―Rabbi Lawrence Kushner, Emanu-El Scholar at Congregation Emanu-El of San Francisco; author, Honey from the Rock and God Was in This Place and I, i Did Not Know

“Jeff Roth has dedicated his life to seeing clearly, knowing directly and understanding truly for the sake of wisdom.... Here he invites us to join him―and it is worth doing!”
―Rabbi Jonathan P. Slater, DMin, Institute for Jewish Spirituality; author, RA Partner in Holiness: Deepening Mindfulness, Practicing Compassion and Enriching Our Lives through the Wisdom of R. Levi Yitzhak of Berdichev’s Kedushat Levi

“Bringing his deep understanding of Torah together with his wise understanding of Jewish and Buddhist teachings on meditation, Rabbi Jeff Roth unfolds a complex and compelling theology of mindfulness.”
―Rabbi Rachel Cowan, executive director, Insitute for Jewish Spirituality

“A fascinating and profound integration.... Will challenge you, inspire you and open your heart and your mind!”
―Rabbi Sheila Peltz Weinberg, Institute for Jewish Spirituality

“A truly inspiring work of theology, radically grounded in experience, not doctrine and dogma.....This excited, exciting and revelatory book is a must for the reader seeking direct access to Torah for our time.”
―Norman Fischer, author, Experience: Thinking, Writing, Language and Religion and What Is Zen? Plain Talk for a Beginner’s Mind

“A wonderful example of the fruits of interfaith seeking.... Most certainly a gift to practitioners.”
―Ebn Leader, faculty, Hebrew College; co-editor, God in All Moments: Mystical and Practical Wisdom From Hasidic Masters

Rabbi Jeff Roth helps spiritual seekers cultivate gratitude, awe and an awareness of the Divine Presence from a Jewish perspective. A well-known meditation practitioner, teacher and facilitator of Jewish retreats, he is founder and director of the Awakened Heart Project for Contemplative Judaism and co-founder of Elat Chayyim, where he served as executive director and spiritual director for thirteen years.

Jeffrey A. Smith
4.0 out of 5 stars Concise and alternative way of looking at the Bible.
Reviewed in the United States on February 6, 2017
Verified Purchase
Well written for a lay person. Rabbi Roth provides a different way to look at the Bible. Some portions require a slower and careful reading.
Read more
One person found this helpful
Helpful
Comment Report abuse

Susan C. Richards
5.0 out of 5 stars This book is a fascinating contemporary update of traditional Jewish ...
Reviewed in the United States on November 24, 2016
This book is a fascinating contemporary update of traditional Jewish mysticism, drawing on Rabbi Roth's broad familiarity with many spiritual traditions that is experientially based. Here is an example: "Buber would say that the "I-Thou" experience arises in a moment of grace and cannot be manufactured.... But we can foster the conditions in which these moments of grace are more likely to become manifest. In particular, the practice of Loving Attention to the unfolding of each moment will allow us to deeply see the truth of interconnection as the fundamental reality of life." He includes many invaluable specific ways to practice Loving Attention, and elaborates what it really is and really means. Mindfulness, or "heartfulness", will never be the same for me. (less)
flag
comment · see review
Read more
Helpful
Comment Report abuse
See all reviews from the United States