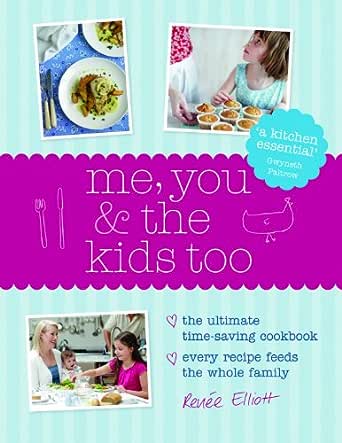 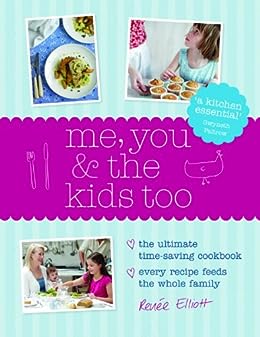 Me, You and the Kids Too: The Ultimate Time-Saving Cookbook - Every Recipe Feeds the Whole Family Kindle Edition

Renée Elliott is the founder of Planet Organic, the UK's largest organic supermarket. She is the author of Healthy Eating for Your Baby & Toddler (Duncan Baird).

3.6 out of 5 stars
3.6 out of 5
5 customer ratings
How does Amazon calculate star ratings?
Amazon calculates a product’s star ratings based on a machine learned model instead of a raw data average. The model takes into account factors including the age of a rating, whether the ratings are from verified purchasers, and factors that establish reviewer trustworthiness.
Top Reviews

prisrob
TOP 50 REVIEWERVINE VOICE
4.0 out of 5 stars Family Eating
Reviewed in the United States on March 18, 2012
Verified Purchase
Renee Elliott, is the founder of the Planet Organic supermarkets in the UK. She has always been interested in eating healthy foods. Before she had children she was heavily involved with nutrition. And, then her first child came, and as the months went by she realized her child would need to eat solid foods and she had no idea what to feed her. Jarred or canned Baby food was not acceptable to her. She developed meals and as more children came she wrote a book on how to feed children. Soon, she realized that work and taking care of children and feeding them, left very little time for food for she and her husband. Thus she started looking for meals that she could make for her children and their parents.

This is an attractive cookbook and covers everything that you would want to know. Renee Elliott starts with an Introduction which explains her philosophy of cooking. The second chapter discusses healthy food for the entire family and her philosophy of sugar, what kinds of milk to use, oats etc. The Wonder Foods, garlic, buckwheat and so on. And, then the stages and ages and development of babies until they are ready to eat what everyone else in the family eats. This is all great information for everyone. I am an experienced mother and I found most of this information was explained very well.

Renee then goes on to the chapters covering recipes, there are over 85 recipes with information on how to make variations for babies. There are four chapters that pretty much cover all of the food you will need for a day. Starting the Day Well, the first recipe, Pear and Pecan Smoothie caught my attention, does it sound wonderful! Time For Lunch, Around The Table, and Baked Treats follow. Many of the recipes are new and have an interesting combination of foods. Each recipe has enough food for two adults, one child and one baby. There is information on prep time, cooking time, and storage. The one issue I have is that the photographs are not vibrant enough, they did not capture my eye. They are attractive and well done, but too subdued.

This cookbook will be a gift for my daughter. My two year old granddaughter will benefit from some of these recipes. Her parents are very concerned that she eat healthy organic food. This is a great place to start.

Healthy Eating for Your Baby & Toddler: Delicious Recipes Right from the Start

Me, You and the Kids Too

DarrenIngram_dot_com
3.0 out of 5 stars Mixed views
Reviewed in the United States on February 18, 2013
For a time the busy family mother (and it is mostly ladies with some notable masculine exceptions) have been led to believe that convenience and ready-made foods have been their saviour in the battle to achieve some form of work-family-life triangle. There is now a renaissance for home cooking and healthier eating, yet many younger people don't REALLY know how to cook! Help!

Fortunately this book cheerfully comes to the rescue without being patronising or overly-complex with its informal teaching style. This is not a specific "teach yourself cookery" book but even the inexperienced will be able to make a good meal after following the book's advice. And if you are a bit of a star in the kitchen, you might pick up a few new recipes, a few tips and maybe some time-saving routines into the bargain.

Cleverly, the author has planned everything so that you can prepare healthy, nourishing food for the entire family from just one recipe, making food suitable for adults, youngsters and even small babies at the same time. No separate meal planning and preparation! Modifications are easy and you even get some extra for your lunch the following day or the freezer.

As part of the author's quest to eat healthily there is inevitably a degree of "perception programming" which some readers may find off-putting. It is a fine line to get between stating fact and stating opinion and some of the recipes are based around the author's own perceptions, such as that cow's milk is meant for baby cows and not human beings, so alternatives are recommended where possible. A lot of information is given for the reader, such as an extensive overview of "wonder foods" which are highlighted as they are said to offer something above and beyond what most people eat every day and are worth including in your diet. Basic advice is also given about the art and methods of cooking and basic nutritional background information. Then it is on to the recipes, which are split into several logical sections covering typical meal times.

Many of the recipes are what one might fairly describe as basic, such as smoothies, fruit breakfasts and burgers, but the range overall is impressive, not repetitive and certainly appealing to the adult who really does not want more mushed vegetables. Of course, the younger ones might not care so much at the time, but hopefully they also learn through exposure and experience. Following the recipes is fairly simple, thanks to the informal and clear writing style, clean layout and overall demeanour of the book and thus combined with the wide range of recipes this could be an appealing proposition to many, particularly when combined with the quite unique "one recipe suits all" style.

Sadly though, the book does seem to lack a certain something to transform it from a good, regular book to a particularly super book. It might be the slightly nannying tone concerning ingredients that manages to cast a little shadow. It is hard to decide. But like restaurants, a three or four star restaurant is by no means bad, even if the chef had wished it could be a five star establishment. Perhaps that is the same for the author. Here is a good book, a quality "three or four stars" but it is not up there in the rarified atmosphere of a five-starer.

If you are expecting a child or have a young family, you might want to at least take a closer look at this book. If it gels with you and your expectations then you will be very pleased. Otherwise you need to find something particularly appealing in this book to pluck it out from many similar other ones.
Read more
One person found this helpful
Helpful
Comment Report abuse

A.L.E
4.0 out of 5 stars Love it
Reviewed in the United States on June 25, 2013
This is a wonderful book! I've only tried the fish cakes so far but they were the best homemade fish cakes I've ever had. Look forward to trying more..
Read more
Helpful
Comment Report abuse
See all reviews from the United States

J MK
3.0 out of 5 stars Three Stars
Reviewed in the United Kingdom on November 26, 2016
Verified Purchase
I personally wasn't blown away but that's just me,
Read more
Helpful
Sending feedback...
Thank you for your feedback.
Sorry, we failed to record your vote. Please try again
Report abuse