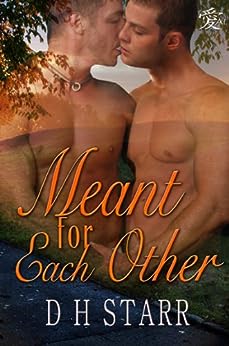 Meant For Each Other Kindle Edition

3.5 out of 5 stars
3.5 out of 5
18 global ratings
How are ratings calculated?
To calculate the overall star rating and percentage breakdown by star, we don’t use a simple average. Instead, our system considers things like how recent a review is and if the reviewer bought the item on Amazon. It also analyzes reviews to verify trustworthiness.
Top reviews

Francesca
3.0 out of 5 stars Not too good, nor too bad
Reviewed in the United States on September 8, 2012
Verified Purchase
Craig and Jeremy, best friends since childhood and parted after their freshman year in high school, find each other 15 years later when both are in committed relationships. Craig's boyfriend, however, is a money-grabbing egotist and unfaithful to boot, and the romance has faded from Jeremy's relationship because of his boyfriend's desire for the finer things in life, although at the core he is a good a decent man. With all the book's issues, I did enjoy the story, although parts of it dragged and was repetitive, and there is a large amount of missing pronouns and prepositions.

The very first chapter had some pretty blatant errors and nearly put me off from finishing the book. First off, the boys climb 70 feet up into a tree. The author, apparently, has no concept of just how high 70 feet is, and I doubt it was a giant redwood that soared 6 stories into the sky. Then Craig talks about wanting to get into computers, and Jeremy says they can keep in touch after he moves via Skype. In 1995, Skype was not even a gleam in it's founder's eye, and was 8 years into the future. Anyone remember how computers were in 1995? I do, and have been trying to remember if we even had mice back then. If we did, they were brand new, and the internet was in its infancy.

The book is full of stereotypes and the constant adjusting of boy bits - as if two grown men can't control themselves under any circumstances. There is also a large amount of missing pronouns and prepositions.

The redeeming quality in the book is Craig and Jeremy's story, although I doubt I will reread this one.
Read more
Helpful
Report abuse

I'm not going to tell you about the characters, others have done that before me,
but I will say this; they are flawed and that makes them so real they will tug
at your heartstrings and make you hope that they find their way through the
maze of unknowns that surround them.

It's one of the most heart warming and loving books I have read.
I intend to read it again and again until I have it memorized.
Why? Because like the title indicates, some things are just
meant to be...
Read more
8 people found this helpful
Helpful
Report abuse

Twin Cities G
4.0 out of 5 stars nicely intriguing for near middle age readers
Reviewed in the United States on May 28, 2012
Verified Purchase
Decent conversations, romance and adequate sex, fair background, yet less than fair insights to what character's are really wondering, and quite shy on general description of scenes that might help the reader appreciate the meaning of such for the characters. The plot has a nice twist, though rather predictable. I hope to read more from Starr especially about lives of middle-aged gays. I for one, am tired of reading coming-out stories, and appreciate reading more about the challenges that longer-term couples encounter and overcome.
Read more
Helpful
Report abuse

Flowsignal
4.0 out of 5 stars Great Read
Reviewed in the United States on June 7, 2015
Verified Purchase
I really enjoyed this story of love and hope. All of the characters have their own distinct voices and personalities that draw you into their worlds. One thing I would of liked is if the story had better pacing. Some things were q little drawn out. Other than that, a great read.
Read more
Helpful
Report abuse

Dean Jones
5.0 out of 5 stars A tender love story
Reviewed in the United States on April 24, 2011
Verified Purchase
I just finished the book and enjoyed it immensensley.
I loved the twist in the plot many times by the author; there was not predictability.
I was able to relate a personal experience.
Thanks D.H. Starr for a great love story. I'm so glad that Craig and Jeremy found each other and settled down.
Read more
Helpful
Report abuse

Joren44
1.0 out of 5 stars One of the Worst Story I've Ever Read
Reviewed in the United States on July 4, 2011
Verified Purchase
This is actually a 0 star story. This is not a M/M romance or fiction story. This is a Western Yaoi story which is a whole nother category all by itself. A Western Yaoi is an off shoot of Yaoi except that the two main M/M characters are Caucasian and not Japanese and typically one of them is basically a woman in a man's body. That would be Jeremy in this case. Yaoi and Western Yaoi are for the most part really childish, flat, draggy stories that are really written more for teenage girls than adults. The plot are usually immature, lame, dull, soap operatic melodramas that make you go WTF who writes this bad. I wouldn't buy from this writer again now that I know this person only writes Western Yaoi. This story is really, really mind numbingly bad. It is right up there with "Touch Me Gently" bad. No self-respecting man Causasian or otherwise would allowed himself to be used as a doormat and then make excuses for the abusive boyfriend for like a hundreth time. He would have been out of that relationship so fast it would make your head spin. The story reads like a badly translated Yaoi novel like someone who doesn't know American Englsih very well. Dialogue is stilted and word usage were bizarre that make you wonder who speaks like that? I couldn't finish it. Only got 1/4 of the way through before I started skipping and finally decided my time can be better spent reading quality M/M novels. Skip this, save your money, and read any stories by Josh Lanyon, Jordan Castillo Price, Urban and Roux, and James Buchanan just to name a few top notch, excellent M/M writers out there. They know how to write male characters and keep them male. They write page turning, complex, multi-layer stories that is really meant for adult taste and not geeky teenagers.
Read more
7 people found this helpful
Helpful
Report abuse
See all reviews

MALCOLM
4.0 out of 5 stars ITS NEVER TO LATE.
Reviewed in the United Kingdom on August 13, 2013
Verified Purchase
A good read.But not what I expected. I thought it was a growing up and falling in love type. Wrong. It quickly shifts to separation. I am not going to give away the story line, but it swung towards an erotic novel and you are going to get a lot of sex. No problem with that. However it was almost as though the author never quite made up his mind as to genre or he was advised to sex it up a bit. Overall worth aread as a kindle, I might have been less sure as a paperback.
Read more
Report abuse

Dr Max
5.0 out of 5 stars Great Story of First Love Rediscovered
Reviewed in Canada on September 19, 2011
Verified Purchase
I've read any number of stories on the theme of two men who were childhood best friends and then were separated by circumstances, rediscovering each other and seeing if what was between them many years ago is still there. That's the theme of this book and the author does an excellent job of developing the characters and the story line.

Craig Harper and Jeremy Finn first met on the day their parents took them to daycare and became friends right away. They went to school together, hung out together, and were as close as any best friends could be. And then, at the end of their sophomore year in high school Jeremy's parents moved across the country to be near an ailing parent and the two boys were separated for the first time in their lives. On the very last day before the move the boys realize the depth of the connection between each other and share a blistering kiss for the first and only time.

The book flashes back and forward between those early years and a time in New York 15 years later. We discover that both men are now living in New York, unaware of the other's presence. Both are in a long-term relationship and both are beginning to realize that things are not going well in those relationships. Each finds himself thinking more and more about that kiss 15 years earlier and wondering what might have been.

Then the author sets up the meeting that's inevitable. It's coincidence that while Jeremy and his partner, Andrew, are moving to a new home that looks out onto Central Park, the developer who's redoing the building has an open house at which he introduces his graphic designer who will be heading up the project. The designer is Craig and, inevitably, the two former best friends see each other at a reception.

The author has painted a detailed sketch of each of the principal characters and of their living arrangements with their respective partners. At the same time, through the various flashbacks and reflections we get a pretty good idea of the kind of bond that had grown up between Craig and Jeremy throughout their childhood. Now, of course, comes the difficult situation of what's going to happen next.

With their relationships already strained at home, Craig and Jeremy's lives are further shaken by their meeting. They still have that connection and still have that immediate, complete, shared understanding. There is no judgement in their friendship. But what about their respective partners?

Without giving it away, I will say that the decisions that are made are not easy ones and each man handles his life differently. In the end, however, love conquers all. This is a wonderfully rich story with interesting, likeable characters and a thoroughly believable plot. Sure, there are some lucky events that make their lives a little easier but, after all, it's supposed to be a feel-good story. There's some very explicit sex but it's never overwhelming and doesn't direct the plot.

I enjoyed this book a great deal and will likely read it again and again. I give it an easy 5 star rating.
Read more
Report abuse
See all reviews
Back to top
Get to Know Us
Make Money with Us
Amazon Payment Products
Let Us Help You
EnglishChoose a language for shopping. United StatesChoose a country/region for shopping.
© 1996-2021, Amazon.com, Inc. or its affiliates