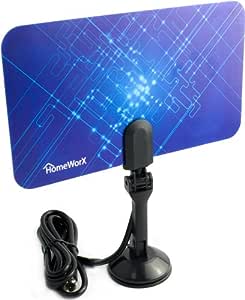 Add to Cart
$9.74
& FREE Shipping on eligible orders. Details
Sold by: AmazinXpress Wholesale Group
Add to Cart
$7.49
+ $8.29 shipping
Sold by: DiscountsJungle
Have one to sell?
Sell on Amazon

3.8 out of 5 stars
3.8 out of 5
9,412 customer ratings
How does Amazon calculate star ratings?
Amazon calculates a product’s star ratings based on a machine learned model instead of a raw data average. The model takes into account factors including the age of a rating, whether the ratings are from verified purchasers, and factors that establish reviewer trustworthiness.

Cedanea Booker
5.0 out of 5 stars im not returning it because its a great investment and works
Reviewed in the United States on January 8, 2017
Verified Purchase
I notice alot of people blaming the produce for not working so im going to explain how this actually works.
First please google your zip code and find out how far away you are from your local tv towers,this will help you with picking any type of antenna for your tv.
My zip codes says im 35 miles from the towers with that being said this produce is not right for my area since it only goes to 25 miles. however i was still able to pick up about 20 channels which was way more then zero. because i didnt check before my purchase i dont get channel 7,11,13 and other local movies channels. but i still get 2,4,5,9 and other closer channels. second you must set your tv to digtal settings to use this product,my tv is a toshiba from 09 and i get clear pictures with this antenna. im not returning it because its a great investment and works. im buying a 50 mile antenna because i want to be able to watch the other channels and im cutting all my cable services and only paying for internet.

Aisling D.Top Contributor: Writing
5.0 out of 5 stars Amazing! Works with tall buildings all around us, and 25 miles from the broadcast station. Crystal clear reception!
Reviewed in the United States on January 9, 2017
Verified Purchase
For the price, I doubted this would work. And, when it arrived, I was not impressed by its appearance. It looks like a painted piece of cardboard (or thin plastic) on a cheap plastic stand.

Also, we're about 25 miles from the one channel (CBS) I wanted to watch. (I won't watch it online, and -- via Roku -- CBS All-Access had far too many glitches.)

But, within minutes of plugging this antenna into my TV, I not only had crystal-clear CBS, but also ABC, Fox, three college-based educational channels, about 10 retro-vintage TV stations (called things like Buzzr, Decades, Antenna, and Grit), and nearly as many Spanish-speaking channels.

We live on the edge of the Disney World property, so we're far from downtown Orlando, and few broadcasters are nearby. Worse, our apartment complex is in a slight gully, so even cellphone reception can be iffy, here.

About six years ago, we switched to streaming TV (via Roku). Within weeks, we'd quit cable TV altogether, and never looked back. Most gaps in our viewing options were resolved with Amazon Prime TV, Netflix, Hulu, and Acorn TV, plus a wide array of free channels. Better TV, on demand and commercial-free, for far less money than cable... we love this!

However, CBS kept singing a siren song, mostly for "Big Bang...," which I can't get via any other streaming service. And, with this antenna, CBS -- the regular broadcast channel -- is free.

I am SO delighted to have a cheap and FUN addition to our TV viewing options. And, several of our new channels have no commercials; they're supported by regular, 30-minute infomercials.

This antenna works great. For the price, and how easy it is to install, I can't imagine paying more for any indoor antenna.

DenverJohn1
5.0 out of 5 stars A really, really good little antenna! Especially when you use two in parallel!
Reviewed in the United States on June 23, 2019
Verified Purchase
I bought this originally in 2018 just to try OTA reception and really didn't spend much time understanding how to aim and scan channels. I have since "cut the cord" so I have spent considerably more time learning to use OTA. I have purchased and mounted an external antenna and another smaller "Powered" antenna. I have connected this Homeworx antennae in the bedroom and was able to receive most of the channels that I get from my external antenna I only had to point it in the right direction because we basically have two major transmission sites that are geographically separated. Here's where it gets good. I bought another inexpensive Homeworx antenna, mounted them both on a glass of a picture frame, pointed in different directions, connected to a splitter an reverse fashion and now I get all my stations using both antennas. If reception is more important than having a couple of thin blue sheets mounted on your wall then this is a great solution. The suction mounting system with the swivel makes it possible. I'm really happy how well it works! BTW, this is much better than my other more expensive powered indoor antenna.
Read more
10 people found this helpful
Helpful
Comment Report abuse

Nirm
5.0 out of 5 stars Great Reception in a tiny antenna!
Reviewed in the United States on December 6, 2018
Verified Purchase
Just received and installed today, As far as product quality a little smaller than I expected , but that was a pleasant surprise. The stand was flimsy but I ran the coax and taped to where I got the best signal.No need for the stand in my case. As far as the reception I picked up 64 channels but most important for me I was able to receive ABC,CBS, NBC, FOX,CW and PBS all the local channels I care about. It’s important to note I went to antennaweb.org punched in my zip and the furthest tower was 18 miles away which is within the 25 mile range of this antenna. Each user of this antenna will experience different results based on location, distance, and other factors , but for the price I paid and the fact it works for me, this was an absolutely amazing deal!
Read more

LapsedUnitarian
4.0 out of 5 stars Worked great, great price, cable is on the short side
Reviewed in the United States on June 11, 2016
Verified Purchase
Plugged into my HDTV and put it on a tall ledge above the TV and despite the signals for all 6 stations I wanted to get having to come all the way through the house from the other end the picture is sharp. I knocked off one star because the cable is too short to get it far enough above the TV to catch the signal. That means scrounging a coax cable (which I had) and a connector (I used a splitter I had because I could NOT find a connector which I KNOW is around somewhere). It is also very light and easily pulled over. I clamped it into a very heavy cast iron decorative piggy bank that happened to be sitting on that same ledge, which worked great. In other words unless you can just mount it right above your TV you might need to get a bit creative to mount it in an effective and attractive way. Great value for $7 and now that I know I can get a signal I've ordered the Homeworx OTA DVR ($30, no fees, bring your own USB drive). Combined with Streaming video I am saving a lot compared to my former DirecTV fees.
Read more

Page 1 of 1 Start overPage 1 of 1
This shopping feature will continue to load items when the Enter key is pressed. In order to navigate out of this carousel please use your heading shortcut key to navigate to the next or previous heading.
Back
Next
Pages with related products. See and discover other items: air antenna, digital tv antenna reviews, ota antenna, over air antenna, high definition tv, tv satellite