Medical Terminology Mastery and millions of other books are available for Amazon Kindle. Learn more 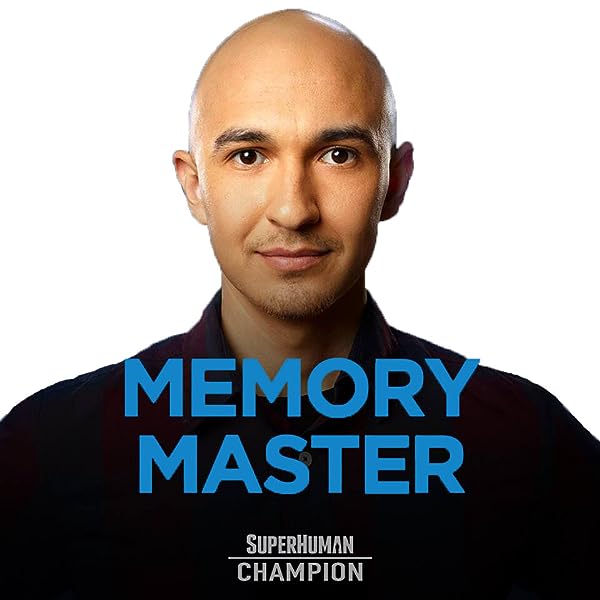 by Luis Angel Echeverria (Author)
4.0 out of 5 stars 35 ratings
See all formats and editions
Sorry, there was a problem loading this page. Try again.

Tags that will help you discover similar books. 5 tags
graduate schoolmemory improvementtest preparationself-helpmcat
Results for:
Page 1 of 1Start overPage 1 of 1
Previous page
Next page
Where do clickable book tags come from?
Book tags are created from a variety of sources, some of which are customer-generated. Amazon is not legally responsible for the accuracy of the tags represented. If you are an author or publisher and would like to remove a tag associated with your title, please contact your vendor manager or publisher support team.

Before becoming the 1st Memory Master Champion on FOX's Superhuman Show, Luis Angel Echeverria was struggling in school because of his bad ability to Focus and Remember. He had a 1.0 GPA his Freshman year and ended his Senior year in high school with a slight increase to a 1.75 GPA. He then went on to learn how to improve his memory from his memory coach and raised his grades in college to a 4.0 GPA! See what other things Luis Angel has accomplished by improving his memory and the memory of thousands of others who struggle with retaining information. * 1st Memory Master Champion on FOX's SUPERHUMAN * Founder and Main Memory Coach at AE Mind - Accelerated Empowered Mind * Competed in the USA Memory Championship, Australian Memory Championship, Taiwan Memory Championship, Spain Memory Championship, and more * Memorized a 120 digit number in 5 minutes with Perfect Recall * Memorized a Deck of Cards in 2 min. with Perfect Recall * Was the Youngest American to Compete in the World Memory Championship * Coached the AE Mind Memory Team to a 1st Place Medal in the Numbers event at the USA Memory Championship * Started AE Mind Memory Clubs in Los Angeles High Schools and in Universities such as UC Irvine and UC Santa Barbara. * Speaker for Schools, Organizations, and Companies to help students and professionals have a "Better Memory Now" * Author and Creator of the AE Mind: Better Memory Now Series
Start reading Medical Terminology Mastery on your Kindle in under a minute.

4.0 out of 5 stars
4 out of 5
35 global ratings
How are ratings calculated?
To calculate the overall star rating and percentage breakdown by star, we don’t use a simple average. Instead, our system considers things like how recent a review is and if the reviewer bought the item on Amazon. It also analyzes reviews to verify trustworthiness.
Top reviews

Buy It From Hope
5.0 out of 5 stars Worth every penny! Easy read, informative, and impactful!
Reviewed in the United States on June 10, 2016
Verified Purchase
It’s all about visualization to Luis, “the power of creating a story.”

We are particularly good at this skill when we are children; we become “creative story tellers.”

He brings about the understanding of how our forefathers would transfer knowledge their sharing stories. Luis seems to imply that various points in the brain are activated when we are taking in a story.

I don’t want to spoil the book for anyone, definitely worth every penny.
Read more
3 people found this helpful
Helpful
Report abuse

Valerie P.
4.0 out of 5 stars Worked great for me
Reviewed in the United States on March 4, 2018
Verified Purchase
Worked great for me! Depends on what you're expecting from it... if you're looking for a complete guide/list/dictionary type of book, this probably won't be for you. Medical terms are based on prefixes, suffixes, root words and abbreviations. The author gives a couple memory techniques and follows up with EXAMPLES of his versions. There are many terms with definitions included but don't expect a full list.
How it worked for me: used his technique to create my own (what it teaches you to do) and it was freakin amazing!!! I was also able to build off of the concepts & apply it to other more complex areas of study. I'm incredibly impressed with my results 😁 Hope this helps!
Read more
One person found this helpful
Helpful
Report abuse

nyc amazn customer
2.0 out of 5 stars Not Very Useful
Reviewed in the United States on July 15, 2017
Verified Purchase
The author gives an intro that has an extremely good method for memorizing unfamiliar or random sets of items.

But, past that, the list of mnemonics, specifically for medical nouns, functions, descriptors, is a) not the set of mnemonics and mnemonic acronyms common to medical professions (not, e.g. a list such as RICE- Rest, Ice, Compression, Elevation, for sprains)

The list of mnemonics for memorizing, e.g. medical term prefixes, is SO colorful, near arbitrary and so divorced from the use and meaning of the term one is trying to memorize, that it is a counterproductive distraction FROM memorizing the terms.

(Infra- below. Picture an infrared cat, under a table. This is the mnemonic for memorizing structures below the temporal cranium. There is so arbitrary a correlation between anatomical structures below the temporal cranium, and an an infra-red cat under a table that by the time you've memorized the bizarre mnemonic, remembering the actual term, much less structure or function, or role in medical diagnosis or treatment is lost)

Actually just learning common Greek and Latin roots, and anatomical location terms (supra, saggital, posterior...), and using traditional medical mnemonics is a much much better way to memorize, and also to retain the medical sense of the material, rather than memorizing sheer random term-recall mnemonics)

I would not wish to be treated by any medical professional who used this book as a medical study guide.

That said, the introductory techniques are great for memorizing objects who's meaning or use is not of any direct functionality- eg, the technique is great for memorizing, say, names, or or unrelated sets of objects.
Read more
3 people found this helpful
Helpful
Report abuse

Kelli Doby
4.0 out of 5 stars Good Book
Reviewed in the United States on August 8, 2016
Verified Purchase
I am using these methods now and will be using them in my classroom to help my students to succeed. It seems easy to follow and has excellent tips on how to master the terminology.
Read more
2 people found this helpful
Helpful
Report abuse

Nathen Springs
5.0 out of 5 stars Another Great Book from Luis!
Reviewed in the United States on August 5, 2016
Verified Purchase
If you follow Luis like I do, you know he's put in the work at what he teaches and you can see the amazing journey he's creating. Follow this guy and get his books and you'll improve if put the effort into it...I have no doubt.
Read more
2 people found this helpful
Helpful
Report abuse

Omid Kazravan
5.0 out of 5 stars Super Helpful
Reviewed in the United States on June 26, 2016
Verified Purchase
I learned so much from this book. It was by far the most helpful medical terms book that I have gone through because of the various visual examples that Luis Angel presents here. The mnemonic triggers helped me learn the terms in a fraction of the time that it would have normally taken me.
Read more
2 people found this helpful
Helpful
Report abuse

Amazon Customer
5.0 out of 5 stars Five Stars
Reviewed in the United States on June 7, 2017
Verified Purchase
was a gift for a nursing student she loved it
Read more
One person found this helpful
Helpful
Report abuse
See all reviews

June
3.0 out of 5 stars Don' t buy
Reviewed in the United Kingdom on November 1, 2016
Verified Purchase
Not good. Much easier ways to remember by association.
Read more
Report abuse

Weike
2.0 out of 5 stars At least it was not expensive.
Reviewed in Spain on July 30, 2018
Verified Purchase
I’m a bit disappointed.
Read more
Report abuse
See all reviews

Page 1 of 1 Start overPage 1 of 1
Previous page
Next page
Pages with related products. See and discover other items: nursing student books, prefixes and suffixes, nursing books for students
Back to top
Get to Know Us
Make Money with Us
Amazon Payment Products
Let Us Help You
EnglishChoose a language for shopping. United StatesChoose a country/region for shopping.
© 1996-2021, Amazon.com, Inc. or its affiliates