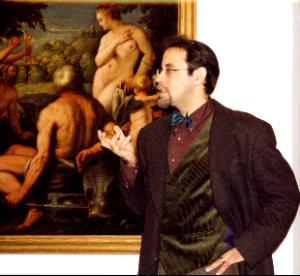 The Medieval Haggadah: Art, Narrative, and Religious Imagination Hardcover – May 9, 2011

Shows with remarkable sophistication and an acute visual sense how [medieval haggadot] did much more than illustrate the story of the Exodus, creating, rather complex statements about the role and place of Jews in the society of the time, as well as producing remarkable works of art.-Gabriel Josipovici "BOOKS OF THE YEAR" Times of London

Marc Michael Epstein is professor of religion at Vassar College.

Seth H. Rosenzweig
5.0 out of 5 stars Intelligent and Deep
Reviewed in the United States on May 24, 2011
Verified Purchase
I heard Professor Epstein lecture at the Skirball Center in Los Angeles, and he was terrific, so when I got home, I bought the book, sight unseen, and I have to say, it, too, is wonderful--not only beautifully illustrated but also fascinating on many levels, touching on themes of loss, freedom, the role of women in Judaism, and the role of art in the world. He even delves into the cross-pollination between the Jewish and Christian traditions in Medieval religious art. As I said, fascinating stuff, intelligent and deep.
Read more
4 people found this helpful
Helpful
Comment Report abuse

Stacy Leeman
4.0 out of 5 stars Creative and Illuminating
Reviewed in the United States on May 17, 2011
Verified Purchase
Epstein writes a book with humor, thoughtfulness, and clarity. This book is truly stunning in it's format but also in content. Epstein asks difficult questions, poses creative answers and makes the reader think. This book has implications and ideas that relate to many of us. It's audience should include more than just Medievalists.
Read more
2 people found this helpful
Helpful
Comment Report abuse

Karen A. S.
5.0 out of 5 stars gorgeous book
Reviewed in the United States on March 25, 2013
Verified Purchase
this is a beautiful book, with amazing reproductions of pages of four early illustrated haggadot. the commentary is interesting and readable.
Read more
3 people found this helpful
Helpful
Comment Report abuse

Buda Zsofia
5.0 out of 5 stars Intellectual adventures illustrated
Reviewed in the United States on May 30, 2011
Marc Epstein's new book is outstanding in more than one sense. Its revolutionarily fresh approach to medieval Jewish visual culture is paired with an entertaining style and magnificent, high quality images, and all this at an affordable price.
The author examines the illustrations of four medieval Haggadot of the fourteenth century: the Birds' Head Haggadah, the Golden Haggadah, the Rylands and the "Brother" Haggadot. His innovative analysis oversteps the frames of traditional art history and takes the reader on an intellectual voyage through the realm of medieval Jewish-Christian dialogue. Marc Epstein points out how the Jewish authorship of these Haggadot used the visual medium to express theological and social ideas, and to respond to historical events. Reading the book, one discovers that book illumination and visual culture in general is able to open a new window and offer a fresh perspective on Jewish-Christian coexistence in the Middle Ages, and to shed light on certain aspects that are not palpable through written sources.
This book is much more than a monograph of four Haggadot. Just as his previous work, Dreams of Subversion in Medieval Jewish art and Literature (Pennsylvania: Pennsylvania State University Press, 1997), Marc Michael Epstein's recent book is the foundation of a new methodology for studying Jewish visual culture as a creative and responsive medium which is able, and was indeed used, to express genuine Jewish ideas, rather than as a merely imitative or second-rate field compared to Christian art. Thanks to its clear and literary style, the book speaks to a much wider audience than a small circle of experts on Jewish art. Great enjoyment for the mind and the eyes!
Read more
5 people found this helpful
Helpful
Comment Report abuse

mathteamjock
5.0 out of 5 stars An invitation to conversation
Reviewed in the United States on May 26, 2011
This book provides an unmissable window into the world of medieval Jewish manuscript illumination. Like any good writer, Epstein makes a subject that might not initially have drawn my attention nothing less than fascinating. Where some might see oddly-drawn figures and a lack of artistic refinement, Epstein sees complicated illuminated manuscripts that shed light on the myriad ways that medieval Jews read and re-read the classic narrative of the Haggadah. Epstein's arguments are well-constructed and never boring; he is unafraid to share bold speculation, but also grounds his work in solid research and close examination of the details of the manuscripts. What comes across most clearly in Epstein's writing is his deep respect for the complexity and self-awareness of the creators of the manuscripts he examines -- and he extends that respect to you, the reader, by providing full-page replicas of the illustrated pages he discusses -- thus openly inviting you to examine them, draw your own conclusions, and add your own voice to the conversation. So, read the book and take the invitation!
Read more
4 people found this helpful
Helpful
Comment Report abuse

Bruce Kaplan
5.0 out of 5 stars Birds, and Lions, and Rams - Oh My!!!
Reviewed in the United States on May 23, 2011
I don't normally like religious art, and having received training in modern intellectual history, I find the Middle Ages to be quite boring. However, Marc Epstein's book really drew me in to the world of medieval Jewry and its depiction in certain Haggadot. Not only does he critically expound upon some really extraordinary Haggadot, he makes them (and their patrons or creators) come alive. His relatively jargon-free prose and family anecdotes make this book fun to read and potentially accessible to a wider audience than the scholastic community. I think the book has enormous power towards that end. Many of Epstein's points and insights may be patently obvious to medievalists and to academics, but not to your average Jew. For example, we learn that far from being an ideal pious patriarchal learned community, my medieval ancestors were separated by class and profession; had an often confusing two-way relationship with larger society; quibbled amongst themselves; stabbed each other in their proverbial backs; kvetched and grumbled; engaged in power games; and liked to employ Gentile motifs and traditions, not the least of which was using the "forbidden" visual imagery. Epstein's analysis posits that medieval Jews, or at least the ones depicted in and appealed to in these haggadot, were far from the innocent male martyrs (as they have often been portrayed) and instead were flawed and complex human beings who strongly valued female contributions and leadership.

Of course, the book isn't perfect. The text was a bit hard to follow when trying to match it with the appropriate plates/figures. And I have to point out one issue that I don't think Epstein underscored nearly enough. The problem with illuminated manuscripts (and with history in general) is that those who've left records of the past, especially when it comes to art, tend to have been the elites of society. These haggadot were done for patrons, who may not have been representative of the Jewish community. They may have been outliers (the wealthiest? the most assimilated?) or an exclusive small, circumscribed group of people. The average medieval Jew may have had little contact with such Jews and such haggadot may not have resonated with them, not to mention seemed heretical. As a recent analogy, how representative was Schoenberg's atonal "biblical" music of the average 20th century Jewish mindset or how much did your average American Jew appreciate it? Nonetheless, these haggadot were commissioned by a particular class at a particular point in time, and it's valuable in itself to see what attitudes of theirs may have been conveyed through these texts.

Thanks to Epstein, I know now that Art Spiegelman and Steven Spielberg's portrayals of Jews as mice have nothing on the Birds' Head Haggadah. Totally need to bring in the ornithologists and comic book artists next time, Marc, to do a thorough analysis of the trippy imagery.
Read more
3 people found this helpful
Helpful
Comment Report abuse
See all reviews
Pages with related products. See and discover other items: best calligraphy books