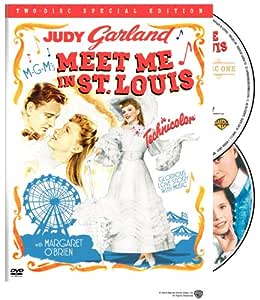 St. Louis 1903. The well-off Smith family has four beautiful daughters, including Esther and little Tootie. 17-year old Esther has fallen in love with the boy next door who has just moved in, John. He however, barely notices her at first. The family is shocked when Mr. Smith reveals that he has been transfered to a nice position in New York, which means that the family has to leave St. Louis and the St. Louis Fair.

Meet Me in St. Louis has been one of the most anticipated DVDs in the short history of the format, and this two-disc special edition was worth the wait. The chief attraction is the new ultra-resolution transfer, looking sharp with lush, beautiful colors. Judy Garland biographer John Fricke provides an insightful commentary, weaving in archival interviews from Margaret O'Brien and others. There's even an orchestra-only track, and it's nice to hear once you get over the shock of not being able to hear Garland's vocals.

There's a lot of material on the second disc as well. The 30-minute making-of from 1994 is solid and informative, the 1972 hourlong history of MGM is a little unfocused but has some great clips, and "Becoming Attractions" (1996) is a 45-minute look at how Judy Garland was marketed through the movie trailers of the time. You can also see a very young Garland appearing with the other Gumm sisters in a 1930 short, and hear an audio-only version of her "Boys and Girls Like You and Me," a lovely Rodgers and Hammerstein tune cut from Meet Me in St. Louis. A 1946 radio adaptation that includes Garland, O'Brien, and Tom Drake proves surprisingly listenable, and much more entertaining than the charmless pilot of a proposed 1966 TV series. But it's all icing on the cake, really, compared to the satisfaction of finally having Garland's glorious performances of "The Boy Next Door," "The Trolley Song," and "Have Yourself a Merry Little Christmas" on DVD. --David Horiuchi