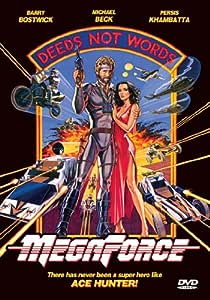 A high-tech soldier with a flying motorcycle leads troops to the rescue of a ruler and her people.

4.0 out of 5 stars
4 out of 5
369 customer ratings
How does Amazon calculate star ratings?
Amazon calculates a product’s star ratings based on a machine learned model instead of a raw data average. The model takes into account factors including the age of a rating, whether the ratings are from verified purchasers, and factors that establish reviewer trustworthiness.
Top reviews

Stefan Huddleston
5.0 out of 5 stars Yes, cheesy as block of cheddar dipped in nacho sauce but with a huge nostalgia factor for me.
Reviewed in the United States on June 12, 2017
Verified Purchase
I was 12 years old when Megaforce came out and my friends and I spent that day commenting on the acting and deeper meaning of the film. Actually, no we didn't we saw motorcycles with machine guns and rockets on them and though they were the coolest thing going. The film was cheesy as hell but would couldn't have cared less, not did we really notice. We spent the summer pretending our BMX bike were the machine from Megaforce and actually used PVC pipe to rig bottle rockets to our handlebars (you know the dumb stuff kids used to do all the time without people having a fit). Also, the film was one for the first actioners I had ever seen where the black character was portrayed as intelligent, yes they used the cheap device of having him quote Shakespeare as he listens to Vivaldi, but compared to the majority of portals of black men in the 70s and 80s it is hard to articulate how huge that was. Sometimes the cheesiest movies are way ahead of the curve when it comes to representation.

Those factors alone allow me to watch this film to this day with a fondness I am sure few understand and I'm OK with that, often one person's trash is another's guilty pleasure.

StkmltS
5.0 out of 5 stars Incredible humor that makes the movie AWESOME
Reviewed in the United States on July 26, 2017
Verified Purchase
When I first realized this was the movie AND people talking over it, I scoured the internet for the movie without commentary. This is all I could find so I watched it. Man, oh man, I couldn't have been more wrong about the voice-overs. These guys are LEGENDARY! I haven't laughed out loud this many times, this hard, in a very long time. Maybe even ever. Seriously, I just finished the movie 20 seconds ago and I'm already thinking about starting it again. These guys are awesome.
Read more
3 people found this helpful
Helpful
Comment Report abuse

Ok, I sent back my original DVD and got a replacement five days later. So first thing, good job Hen's Tooth for acknowledging the problem and working to quickly correct it.

The bad news is, I still can't give this DVD five stars. The audio is better than it was. By a mile. However, I've compared the DVD to my old VHS and the voice actors are still just a bit high pitched. In some places more than others. To my ear it seems whatever fix they've applied is a touch inconsistent (YMMV). But the audio problem is no longer a deal breaker. It's now just a minor annoyance that is easily ignored. If you haven't heard the audio on the original release you may not even notice the problem. I am sensitive to it now.

The video quality is excellent. The movie looks gorgeous. Far and away superior to my old VHS (as one would expect).

Bottom line. If you like a really good bad movie or if you want to upgrade from your old VHS, this disc is now acceptable. It's not perfect. To my ear the audio still seems a touch off and I would love some extra features but I still get a big grin on my face when the movie's done and that's what matters in the end.

Let's take care of the bad first. The audio mix on this DVD is about the WORST I have ever heard. All the voice actors sound like they were sucking on helium balloons. Barry Bostwick sounds horrible. It has to be a crime to ruin that voice. The only minor saving grace is the music doesn't seem to have been that badly affected by whatever the idiots did to the voices so the techno theme sounds OK. But that just gets overshadowed every time someone talks like Mickey Mouse. Absolutely terrible.

Honestly, don't buy this DVD until the audio is fixed. It ruins the movie. Fortunately I still have my old VHS.

And it is a five star movie. Don't get me wrong, this is a BAD movie. In the absolute funnest sense of the word. The writing, terrible. The acting, way over the top. The direction, embarrassing. Mostly let down by the editing which takes the reasonably well done action scenes and repeats them continuously. The many green screen and rear projection shots are hilariously bad (even by the standards of the early 80s). The three seconds of Edward Mulhare in his sunglasses is almost enough to justify the movie by itself.

Every time I watch this movie, I laugh a lot and when it ends I've got a big grin on my face.

Studio OrangeTop Contributor: Photography
5.0 out of 5 stars DEEDS NOT WORDS
Reviewed in the United States on May 12, 2014
Verified Purchase
Welcome to one of the greatest movies ever made.

Tell me, movie fans: Where else are you going to find men wearing skin-tight onsies riding dirt bikes doing impossibly slow wheelies while shooting missiles at balloons in the middle of the desert?

Yes. Megaforce is THAT kind of movie.

If you need to know nothing else, it's that Henry Silva plays the villain.

You could only wish your name was as cool as "Ace Hunter."

Let's face it. You aren't buying this DVD for the picture or audio quality. If you're going to nitpick flaws, then you're missing the point. The gloriousness of this film overrides some minor technical failings.

Buy this movie, invite your buddies over and shout DEEDS NOT WORDS while the motorcycles fly.
Read more
6 people found this helpful
Helpful
Comment Report abuse
See all reviews from the United States

PB
5.0 out of 5 stars Camped up action at its best with A FLYING MOTORCYLCE
Reviewed in the United Kingdom on March 10, 2016
Verified Purchase
An absolutely fabulous camped up action movie. So long as you don't take it to seriously, you'll love it. Over the top acting, special effects that mostly consist people jumping through explosions on dirt bikes, and a villain who is a thinly veiled knockoff of Che Guevara and Muammar Gaddafi.

It's basically Street Hawk in the desert, with cowboy hats and ridiculous ethnic stereotypes (But in a good way), and a little Airwolf and Knight Rider thrown in to the package.

It also has A FLYING MOTORCYCLE.

Yes, I say it again A FLYING MOTORCYCLE.

This is the movie that made me want a scramble bike with camouflage paint.
Read more
2 people found this helpful
Helpful
Sending feedback...
Thank you for your feedback.
Sorry, we failed to record your vote. Please try again
Report abuse

Mrs. T. A. Danczyk
5.0 out of 5 stars Terrific
Reviewed in the United Kingdom on January 18, 2017
Verified Purchase
You have to be a bit of a nerd where this is concerned. I loved this film when it first came out and it hasn't altered my opinion over time. It is just what you would expect from a very camp 1980s' film. It arrived in terrific condition and very quickly also.
Read more
2 people found this helpful
Helpful
Sending feedback...
Thank you for your feedback.
Sorry, we failed to record your vote. Please try again
Report abuse

28daysearlier
2.0 out of 5 stars I kinda get what they were going for but...
Reviewed in the United Kingdom on July 14, 2019
Verified Purchase
...this is just rubbish. It seemed like some crazy mash-up of Doc Savage and The Adventures of Buckaroo Banzai Across the 8th Dimension and GI Joe... but really poor. Not sure if i would have liked this had i seen it at the time. I can't imagine how.
Read more
Helpful
Sending feedback...
Thank you for your feedback.
Sorry, we failed to record your vote. Please try again
Report abuse

ASUS fan
4.0 out of 5 stars A Good watch if you have 90 minutes kill
Reviewed in the United Kingdom on July 8, 2019
Verified Purchase
Prompt next delivery baring in mind it was made while the Berlin Wall was still it’s dated now & was silly then it has plenty of action think A-Team in high tech .
Read more
Helpful
Sending feedback...
Thank you for your feedback.
Sorry, we failed to record your vote. Please try again
Report abuse
Load more international reviews

KABSardine
5.0 out of 5 stars Classic cheese
Reviewed in the United Kingdom on May 30, 2018
Verified Purchase
Full marks just for the nostalgia. Just as I remembered it. Cheesy and dated unless you grew up watching it. A classic!
Read more
Helpful
Sending feedback...
Thank you for your feedback.
Sorry, we failed to record your vote. Please try again
Report abuse

bryan parkes
5.0 out of 5 stars really pleased with it
Reviewed in the United Kingdom on May 26, 2018
Verified Purchase
brought for a friend, really pleased with it. thank you
Read more
Helpful
Sending feedback...
Thank you for your feedback.
Sorry, we failed to record your vote. Please try again
Report abuse

ronald james laidlaw
5.0 out of 5 stars Brilliant
Reviewed in the United Kingdom on April 10, 2020
Verified Purchase
Personal use of liked this movie
Read more
Helpful
Sending feedback...
Thank you for your feedback.
Sorry, we failed to record your vote. Please try again
Report abuse

Michael wilson
5.0 out of 5 stars Silly fun
Reviewed in the United Kingdom on June 14, 2018
Verified Purchase
It's a cheesy, silly film, but my god I love it. The premise is dumb, the acting is average, but it has a charm. Watched it many times as a kid, will do so now.
Read more
Helpful
Sending feedback...
Thank you for your feedback.
Sorry, we failed to record your vote. Please try again
Report abuse
Load more international reviews

ROSS
5.0 out of 5 stars The Greatest 80's Movie you never saw!!!!
Reviewed in the United Kingdom on October 1, 2019
Verified Purchase
This movie sums up everything that was great about the 80's!
Read more
Helpful
Sending feedback...
Thank you for your feedback.
Sorry, we failed to record your vote. Please try again
Report abuse

Page 1 of 1 Start overPage 1 of 1
This shopping feature will continue to load items when the Enter key is pressed. In order to navigate out of this carousel please use your heading shortcut key to navigate to the next or previous heading.
Back
Next
Pages with related products. See and discover other items: Motorcycle Handlebars, Stunt Bike Stuffs