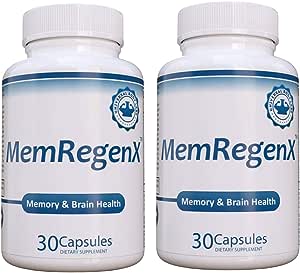 MemRegenX's active ingredient is made of a natural compound. It is both safe and healthy. There are also no known side effects and it can be taken safely alongside any other medications.

Scientists believe that it helps to stimulate the growth of new brain cells in the hippocampus. The hippocampus is the part of the brain that's responsible for forming and storing long and short term memories.

Research has shown that as we get older, brain cells in this area of the brain become dysfunctional.

This is what causes lapses in concentration, forgetfulness, and mental decline and why MemRegenX seems to be so effective.

In a double-blinded study, 149 men and women with age associated memory loss took the key ingredient in MemRegenX for three months. They were instructed to take it every morning without making changes to their current diet or lifestyle. The results were stunning. The participants who took the pill as directed reversed their mental age by nearly 12 years according to researchers conducting the study.

They were also able to remember names, faces, and recall events faster and with greater clarity.

Take 1 Tablet of MemRegenX Daily With or Without Food