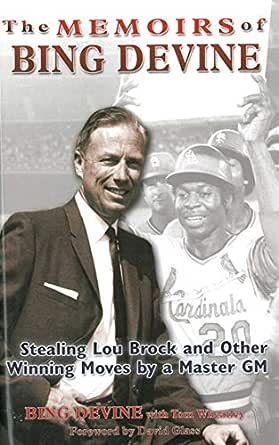 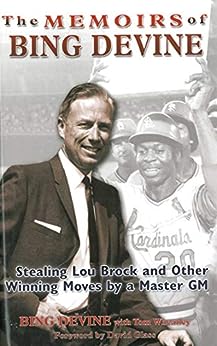 The Memoirs of Bing Devine: Stealing Lou Brock and Other Winning Moves by a Master GM Kindle Edition

So you want to be a big-league general manager? It's not as easy as it looks. Take it from Bing Devine, who built the Cardinals' dynasty of the 1960s and turned the Amazin' Mets from 100-game losers into the world champion Miracle Mets.

Bing is already immortalized in baseball lore as the man who stole Lou Brock from the Cubs for Ernie Broglio. In The Memoirs of Bing Devine, baseball fans receive a thorough introduction to the best GM never inducted into the Hall of Fame.

Nudged by award-winning sportswriter Tom Wheatley, Bing swings open an office door that has been closed for decades in revealing all the details behind the Cardinals' acquisition of players Lou Brock, Curt Flood, Mike Shannon, Joe Torre, Bill White, and Keith Hernandez. Bing also recalls the key role he played in ensuring that Stan Musial retired a Cardinal, championing a young broadcaster named Jack Buck, and steering Whitey Herzog into the front office.

Bing explores his complex relationships with beer baron owner Gussie Busch, who compulsively ordered him to trade emerging star Steve Carlton, legendary executive Branch Rickey, whose return to St. Louis cost Bing his job in 1964, and quirky owner Bill Bidwill of the football Cardinals, who hired Bing as team president and then ignored him.

The only GM ever fired and rehired by the same big-league club, Bing details his wild ride in '64, the season he was named Executive of the Year-despite being fired by Busch in August-as the Cardinals were on their way to winning a world championship. Bing also explains why he declined invitations to be part owner of the Mets and commissioner of baseball.

Bing refuses to take a bow for his stunning career. But a dozen admirers-including Brock, Musial, Herzog, Shannon and Red Schoendienst-shine a spotlight on him here with glowing guest commentaries.

Spanning 65 years in pro sports, The Memoirs of Bing Devine is your invitation inside the office of one of baseball's greatest GMs. --This text refers to an out of print or unavailable edition of this title.

Devine was general manager of The Cardinals baseball team for 18 years. Today, at age 88, he still serves the Cardinals as a special assignment scout some 65 years after first joining his ball club.
--This text refers to an out of print or unavailable edition of this title.